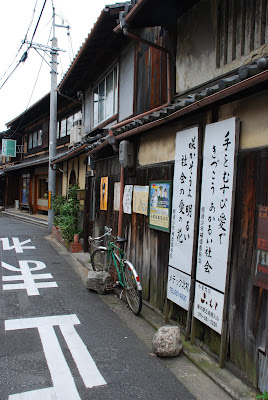 Kyoto has actually burned down four times, but remains with an gorgeously old and historical feeling and sentiment to the place. There's just something about the colours of Kyoto and it's also quite honestly, what makes it look better in photos, than in real life. 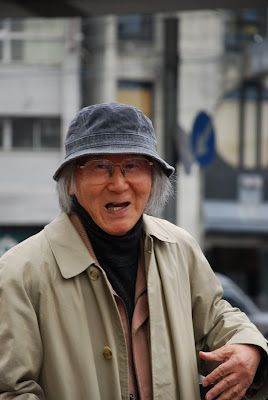 One interesting thing that we did in Kyoto was to follow this old guy, Johnny Hillwalker, around on his Kyoto hike. He does this three times a week and brings a whole crowd into personal temples, cemetaries, pottery shops and markets that you wouldn't otherwise see on the tourist trail. It was a really good sightseeing thing to do, though, wow but the old guy walks hard and long! And, the price of the tour was pretty steep, considering he was collecting cash from a huge group of us insight-hungry travellers! 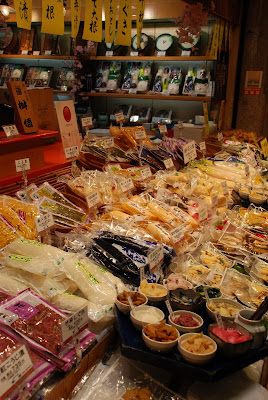 This is one of the stalls in the Nishiki market in central Kyoto, it's a largely food-centric market and a lot of the locals come here for their dried and pickled produce. 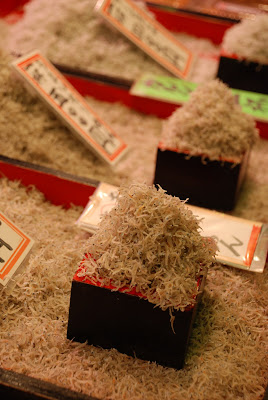 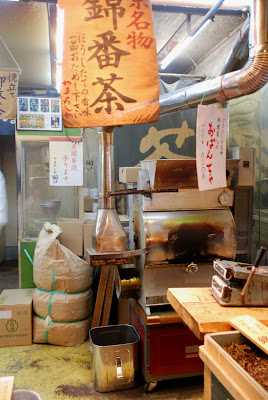 This is a specialty tea shop in the market. In the back, you can see the tea roaster, which was grinding at very high temperatures and spitting out buckets of roasted tea. Tea in Japan is an obsession but I think this tea shop, though small and pretty humble, actually had terrific, aromatic tea. 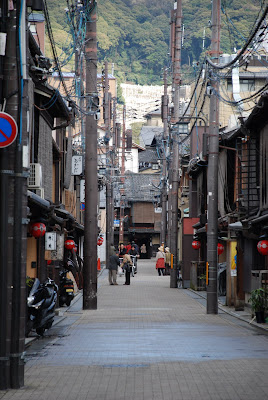 They were also very rude and also not that cheap unless you will willing to buy the tea made of tea-stems, rather than leaves! They packed the tea for you in these vacumn-sealed aluminium foil bags and if you are in Kyoto, this is the only tea shop in the market, I highly recommend their gorgeous Genmaicha. It is the most nuanced, layered, yet subtle popcorny flavour I've tasted in ages. I only wish I had been more adventurous and bought more varieties of tea from here. 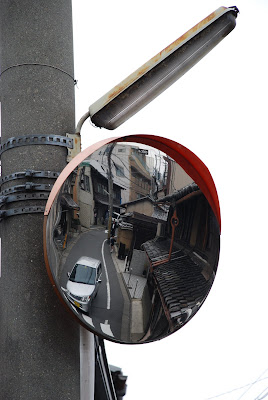 Apart from finds at the food market, I didn't find anything in Kyoto to buy. Generally, I felt that the place while atmospheric, was touristy and things weren't cheap at all. This I felt to be generally true of Japan as a whole, but in Kyoto it was particularly difficult to find apparel that would appeal to me in any way and even for the 'traditional' crafts like fans, pottery and screens, the really good ones are just out of my budget and the regular ones, well, they tend to collect as useless souvenirs after awhile. 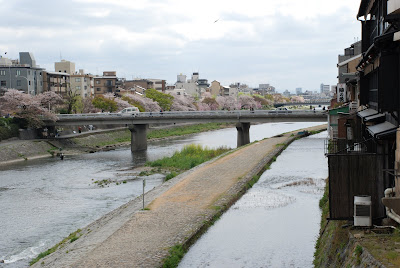 This is the Kamo river in Kyoto, which seperated the Geisha district of Gion, if you've read Memoirs of a Geisha, this is where Sayuri said Hatsumomo would say "Kamo River, have you met my younger sister" and push her in, if she were indeed joined to her in apprenticeship. 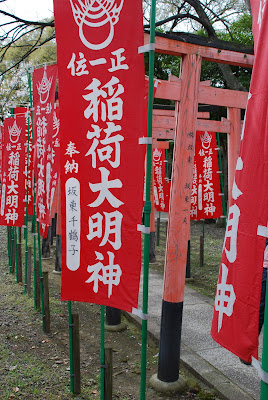 The best part of Kyoto was probably just walking around it and I felt that Johnny Hillwalker did a good job of explaining to us the context of Kyoto. (These two photographs are a private cemetary and temple that he took us to, which his family worships at). 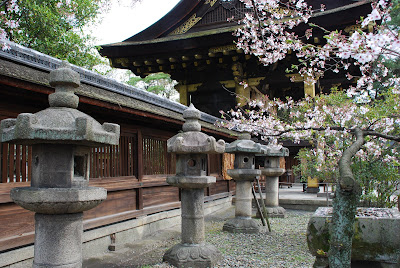 What he explained was that indeed, Kyoto was a place of trade specialisation for particular types of crafts (food, fans, pottery, cards, knive sharpeners) and hence the gentry that could afford such products and lifestyle. 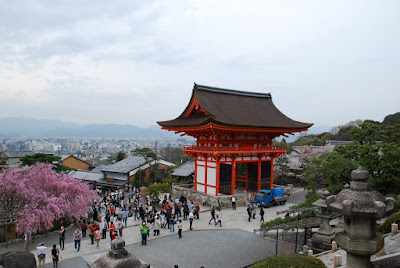 These trades would take place in the humble homes of ordinary tradespeople who used the lower floors of their houses as studios and the upper floors as homes. This focus of cottage craft is one of the reasons that Kyoto is suffering from out-migration, especially of younger people, who cannot find real jobs. This has had a knock-on effect on schools and institutions as the population ages. 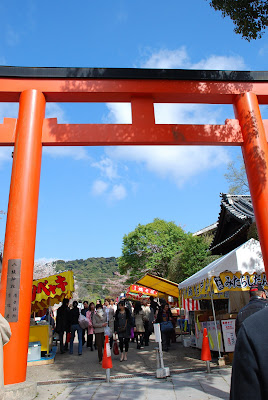 He explained that Kyoto has always been a place of seperate worlds for the rich and the working class, though the beauty, climate and religiousity of the two helped to bind the society together. Kyoto had great temples and gardens which drew the political and business elite here from Tokyo for more 'traditional' experiences and lifestyle. 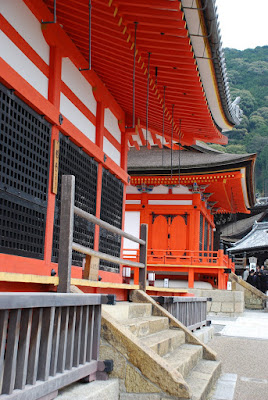 Art, in different forms, including the Geisha movement, flourished here and so did religion, a mix between Buddhism and Shinto. One catered for your soul while you were alive and one took care of your afterlife. 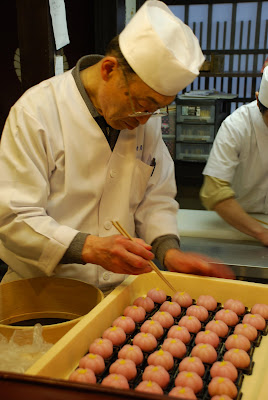 His tour didn't focus on 'grand' temples', like those you see above, rather, little workshops, like the one pictured above, where they make fruit-shaped Japanese mochi sweets. After the long tour, we were encouraged to take the grand temple tour anyway by ourselves and we walked up to the Kiyomizu Temple before returning to the Ryokan for Kaiseki dinner. 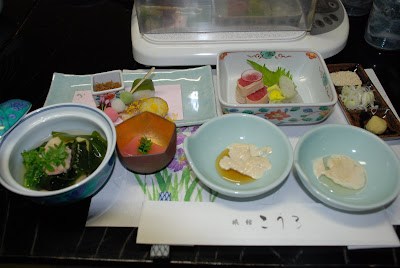 Kaiseki literally means "stone in the bosom", thought to indicate the frugal meal served in the austere style of chanoyu (Japanese tea ceremony) of Zen monks. In the present day, kaiseki is a type of art form that balances the taste, texture, appearance, and colors of food. I've heard it described as Japanese haute cuisine, though I have my reservations about that idea. 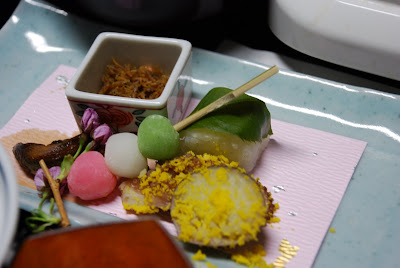 Fresh seasonal local ingredients are used and dishes are beautifully arranged and garnished, often with real leaves and flowers, as well as edible garnishes designed to resemble natural plants and animals. I must say that our kaiseki experience left a lot to be desired, not just because we wound up being very hungry afterward! 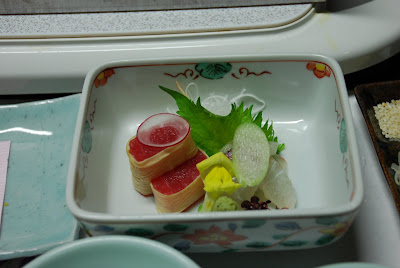 Perhaps it is more meaningful if the proprietor explains to you in Japanese what each part of the meal is about, or if the dish has slightly more food than garnish but for us, the meal was a bit of "toe of newt and leg of fly", with what we concluded was multi-hued goo- pink goo, green goo and white goo, all of which tasted like goo/mochi/rice/yuba (steamed tofu skin). 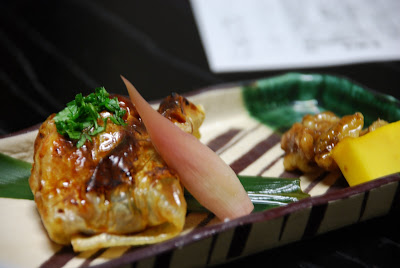 What a pity! I took pictures anyway, the slightly more memorable dishes were the very fresh chilled tuna wrapped in raw tofu skin and served with thinly sliced bamboo pith and the braised cod served with grilled crispy eel skin. Unfortunately, most of the meal just wound up feeling a bit skinny, skimpy and stingy, while at the same time being ridiculously expensive and lukewarmly bland.
Posted by Weylin at 5:36 PM