My workplace placed a wholesale bulk order with Mycofarm Mushrooms, a local gourmet mushroom farm at 9 Seletar West Farmway. Mycofarm was the brainchild of Dr K. K. Tan, CEO and founder of MycoBiotech Inc. Dr. Tan who used to work at the NUS's biochemistry department, began cultivating mushrooms for commercial sale 25 years ago. The company, Everbloom, was renamed Mycofarm sometime in 2006.

Singapore's only specialist mushroom grower is dedicated to producing quality, fresh, natural and chemical-free mushrooms for consumers and their products include Japanese Oyster Hiratake, Willow, Forest Oyster, White Oyster, Emperor Shitake, Royal Abalone and many others. 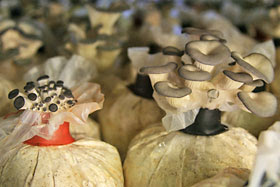 You can take a tour (great for kids) and see how mushrooms are grown, harvested and packed. Shiitake for example, grows on oak logs in the wild, hence its name "Shii" (oak tree) "take" (mushroom). In the farm, Shiitake mushrooms are grown in plastic-bag logs filled with wood substrate. The shiitake mushroom has an incubation period of nearly 100 days, while other varieties take between four and six weeks.

Mycofarm's produce is sold at supermarkets like Sheng Siong and NTUC Fairprice but also at many established eateries like Wild Rocket and Buko Nero and their website
here provides heaps of growing information, like their incubation periods, recipes, nutritional content and more.

For $40 I got a giant styrofoam cooler worth of mushrooms! The giant king oyster mushrooms I would use on a Japanese charcoal grill and the white Enoki mushrooms went into a breakfast-fry. Yesterday though, D. hosted a birthday brunch and I had a brainwave to revive an old favourite recipe. 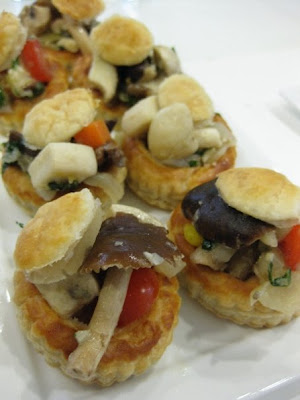 We sauteed a little oil, garlic and one onion together, then added a heap of mushrooms and at the last minute, chopped cherry tomatoes, kalamata olives, basil chiffonade and crumbled goat's cheese. The trick is not to saute the mushrooms for long. You want them to be slippery, but not wet and definitely not soggy. It would be better to err on the side of firm, really, because the mushrooms will still have a lot of taste and will continue to cook, in the heat of the onions.

If you have a pool of water at the bottom of the pan (which you won't if you didn't saute the mushrooms till they went sweaty and soggy), drain the mixture.

Place some store bought vol-au-vent casings on a pan. It was just too early in the morning to mess about with home-made flaky pastry but you can certainly do so. Bake them at a high heat, then remove them from the oven and lever out the little center pieces so you get a depression in the pie. Save those little cap pieces to top your pies.

Spoon mushrooms into the casings, replace the little caps and serve while hot. At home, we also do a more substantial version of a chicken and mushroom pie, by adding diced pieces of chicken, carrot, onion, celery and two large scoops of sticky cream of mushroom canned soup to the mushroom mix. This would make a much heavier, creamier pie filling but just as good with flaky pastry.
Posted by Weylin at 10:35 AM

Hi May I know where you bought the vol-au-vent cases? I've been searching everywhere for them!