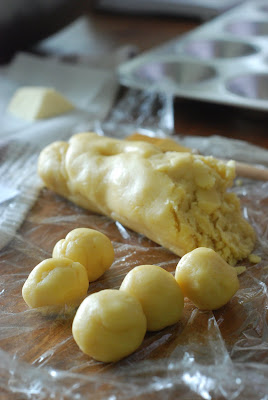 Before I start, I want to wish my dear friend C. all the best, as she sets out on a new life path, I hope you will know all the sweetness of dreams pursued. This post was possible only because of her patient and provisional help, in fact, I've found the secret to posting good step-by-step photos- have someone else execute the steps for you! 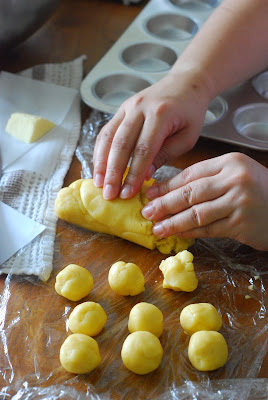 This is her demonstration of the first step to glorious tea-time treats. This dough is Dorie Greenspan's Sweet Tart Dough, which she weighs out to 20 grams and then presses into individual, greased tart tins. These are then baked blind for 20 minutes, till just browned. They are then filled with frangipane and baked again, so don't overbake them the first time. The recipes for both are easily available online. 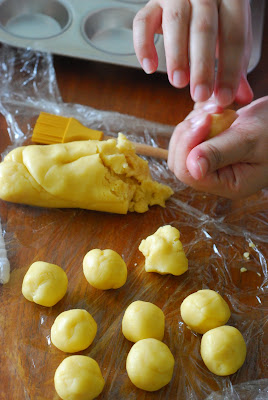 This post, like all good things, was bourne out of greed. I never used to like Mont Blancs, in fact, I never used to like chestnut. I still don't really. I like little ones, Chinese ones, water chestnuts and those hot crackling ones you used to be able to buy on the streets of Beijing, roasted over a charcoal brazier, but big honking, glazed sweet and cold but starchy inside ones? Yuck, no way. 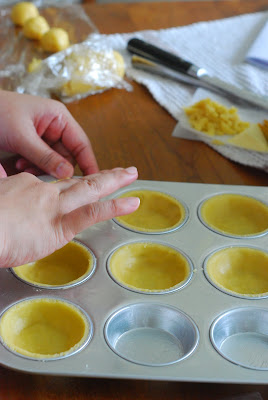 For years, I thought of Mont Blancs as a sickly sweet yet starchy tart and trying some pretty poor versions did nothing to improve my opinion. It wasn't literally, until last year when I was in Angelina's, in Paris, with a couple of friends and our host, SW, urged me to try one and I thought, "well, why not". I don't know if it's because it was their specialty or because we were having a really great tourist shopping day, but it really worked its magic. 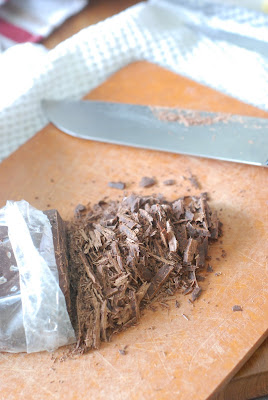 It was light and fluffy, yet sweet and with just a light hint of chestnut sweetness against a dense base of tart and cream. I couldn't stop eating it and enboldened, I stopped on my way out and bought a large bottle of chestnut puree to tip into future macarons. 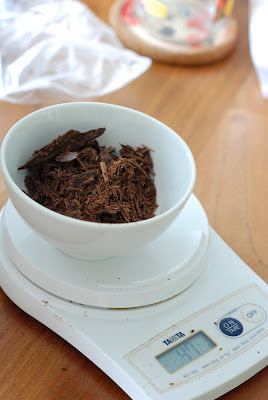 Months later, of course, this hadn't quite worked out the way I'd expected and the jar was still sitting there, front and center in my pantry, mocking me. So when C. suggested Mont Blancs, I jumped at the chance. 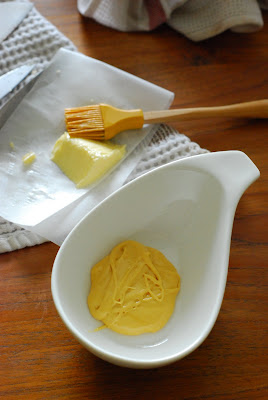 My contribution to this process (and I do mean almost my only contribution), was to suggest that instead of pastry cream inside the Mont Blanc, we could use chocolate mousse. I'd just stumbled upon the recipe from one of my favourite blogs, Canelle Et Vanille's mouth-watering Donna Hay-esque blog and had fixated on this fantastic picture of her tri-chocolate mousse. My goodness, I'd never seen white, milk and dark chocolate so prettily juxtaposed. 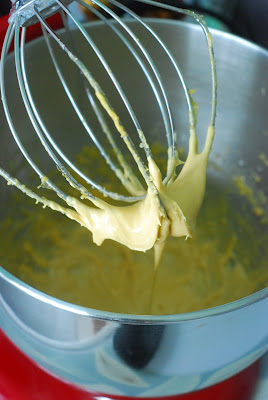 Of course, it wasn't till I started the recipe that I realized, with a sinking horror, how much additional work is involved to elevate this mousse to a whipped lightness. This is the how the pate-a-bombe is made, you whip together a mix of glucose, egg yolk and sugar and water. I was slightly alarmed at the sticky, pastey texture of this and I think I may have shortchanged it a little water but it turned out alright in the end. 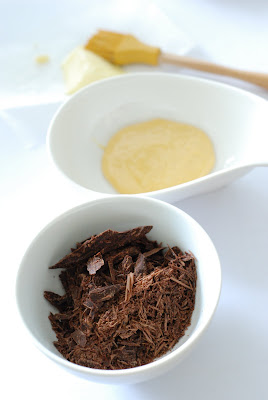 I tried to follow her recipe exactly, chopping the chocolate and mixing in the pate-a-bombe vigourously into the melted chocolate. I then whipped thick cream and added to the chocolate. For those of you who are counting, that's three times that you have to wash your mixing bowl, for just the mousse alone. 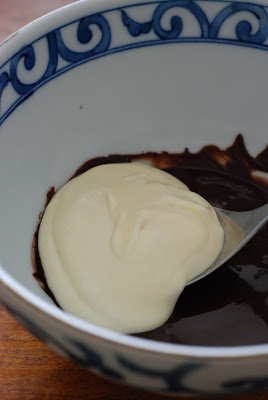 If I ever, ever willingly offer to make these, please know that despite my protestations to the contrary, I must be in love with you. I'm reminded of the Bruce Lee movie where his mean boss at a Chinese restaurant tells him that he will only ever be a "deeshwasher". That's what I think one needs to be an accomplished chef, a really, really good washer-up. 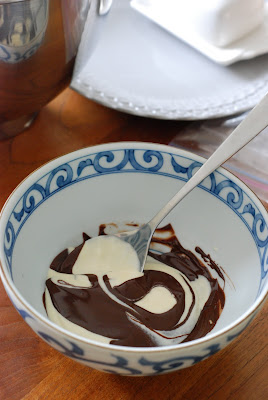 I suppose good things come to those who work and wait. Stir, till it's all mixed. These are the most gorgeous moments of baking, when your chocolate swirls into the cream and all the world is a deliciously carefree mixing bowl. 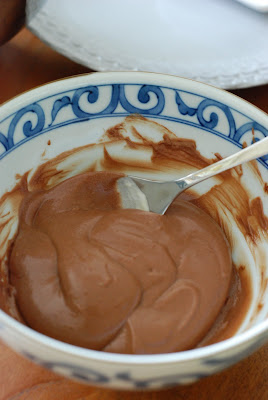 Eventually, when it starts to resemble chocolate again, refrigerate it for a few hours and this is what you come away with. The colour darkens substantially as it cools. 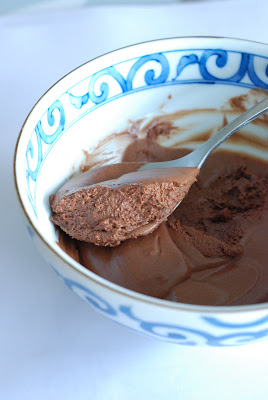 These are the tarts bases after they've been baked and cooled. 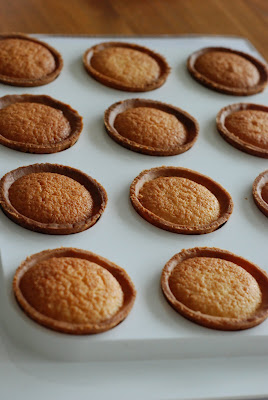 Scoop the chocolate mousse carefully and neatly onto each. I know, I should have used a small melon ball scoop. You can also use a piping bag, if you are using pastry cream, use this instead of the chocolate flavour. 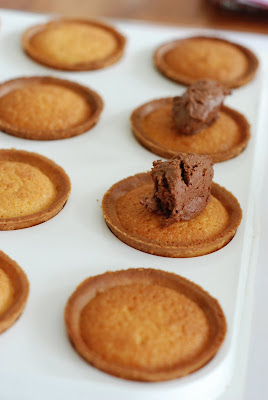 Having tasted both, I prefer the dark, rich base of the chocolate and I love the mix with the crumb of the tart and the chestnut. Some people though, prefer the pastry cream as it is lighter but I find it doesn't provide enough contrast to the chestnut. 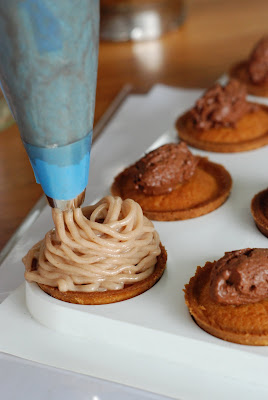 Pipe the chestnut streams around and over the ganache. This is the most fun part of the process! As you can see from the picture, Angelina lies, clearly- their bottled chestnut puree is actually not of the same texture that they use in their Mont Blancs, it is far too soft. 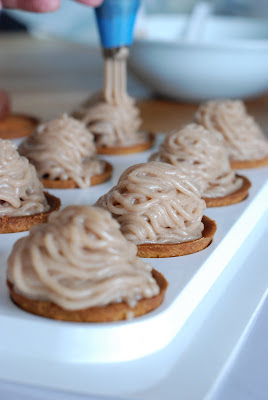 This can be remedied by mixing the chestnut with buttercream (beware, it does curdle) and or perhaps by chilling the chestnut until it thickens slightly. I like the light taste and texture of the Angelina's chestnut puree so the next time, I think I will mix it with fresh chestnut puree. Now seeking some Paris-bound mules to bring some back for me. 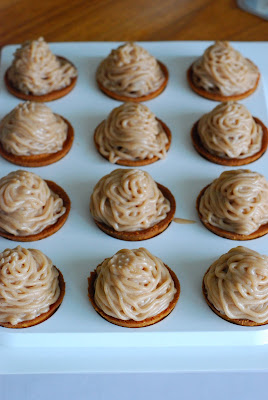 When they are done, top the Mont-Blancs with icing sugar and chocolate nibs or gold leaf. 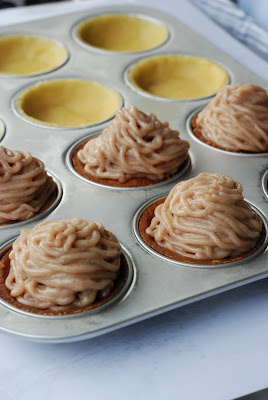 Be warned that they are painful little things to craft and very fast to eat. But, they were the first things that I've made in awhile that received raptrous approval from both Mom (aka particular discerning bad cop barometer) and brother (aka particular discerning good cop barometer) and I really thought they tasted fantastic, well-balanced, rich and sweet. 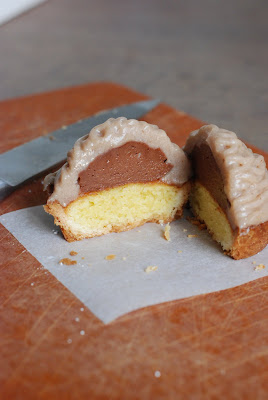 Wow, I can only imagine the amount of work you and your friend must have put into this.