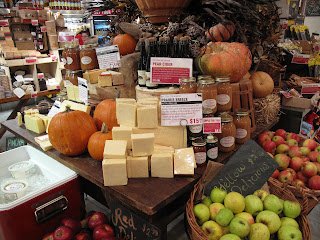 Good food is not merely restaurant-quality haute cuisine: Bleecker Street is a remarkable collection of traditional diners and historic eateries, as well as gourmet shops full of artisanal produce. 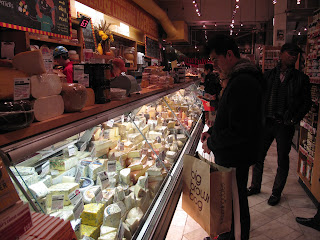 Case in point: Murray’s Cheese – a purveyor and retailer of fine cheeses, many of which come from local dairy farms around the region. From aged cheddars and mild gouda to soft bries and crumbly goat’s cheese, every cheese you might think of serving for your dinner’s cheese course is available. In fact, if you can’t think of what you want to serve, no problem, just take a number and the trained counter staff will walk you through the numerous selections on offer. Of course, if you already know what you want, no need to hog the line as there are separate display areas which contain pre-packaged items. 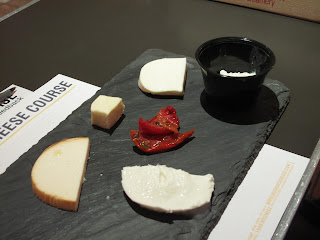 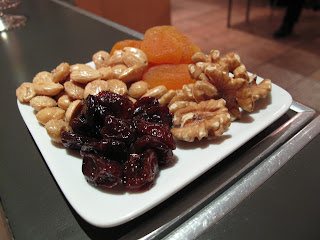 We were not there specifically to purchase cheese, though. Murray’s Cheese also runs numerous cheese-making and cheese-appreciation course, and my sister had kindly purchased S and me a mozzarella-making course. (For those of you who are wondering why I'm posting yet again about Murray's Cheese, look closer and you'll realise that two of the more recent posts about New York City (including the one on Murray's Cheese) were in fact posted by my sister from her last trip to New York!) The course began with a tasting of different kinds of mozzarellas, beginning with tasteless milk curds, then moving on to the soft mozzarellas and the creamy burrata, ending off with a slightly firmer smoked mozzarella. 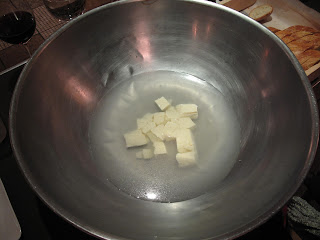 Making mozzarella, for the uninitiated, involves pouring scalding hot water on milk curds, gathering and squashing them up into a solid mass with your bare hands (we were given gloves, but it didn’t make much difference to the hot water), stretching it out into a long, continuous ribbon, then rolling it up like a croissant before pushing it through a ring mould (we simply made an “O” with our forefinger and thumb) so that it forms a pouch, and continuously tucking the ends of the cheese into the pouch until it forms a nice smooth ball. Oh, yes, and all without kneading or handling the cheese too much (or it will toughen out) and simultaneously dipping the cheese into the hot water to relax the proteins.

Unsurprisingly, it was incredibly difficult, and my mozzarella ribbons kept breaking apart, causing me to end up with small, irregularly-shaped and rather tough mozzarella balls. While discouraging, taking one of Murray’s cheese-related activities is actually pretty fun, whether you’re looking for date ideas, or just an enjoyable way to spend two hours, and it’s easy to see why classes book up well in advance. While you’re there, be sure to pick up some wedges of cheese to bring home!

As if Superstorm Sandy wasn’t enough to make my trip a memorable one, a nor’easter gusted through New York, bringing with it gale-force winds and a snowy blizzard that quickly blanketed the metropolis with sleet and slush. It was crazy for anyone to be out in that weather, and yet there we were at 7pm, trekking our way to Apiary restaurant. 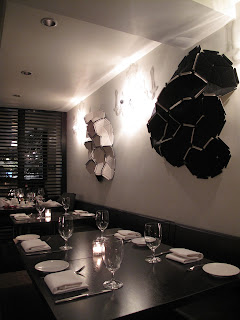 What would normally have been a ten-minute walk became a forty-minute struggle, partly because we had to stop to buy me new socks, as my shoes were not waterproof and my socks were soon a sodden, freezing vice around my feet. It was thus a relief to finally enter the comforting dark wood warmth of Apiary, a chic, modern American restaurant. 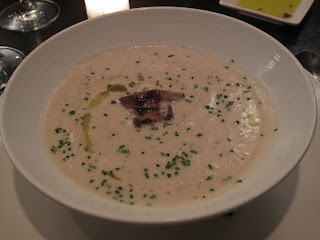 Through most of the week (Sunday, Tuesday, Wednesday and Thursday), Apiary offers a three-course, prix fixe menu for the excellent price of US$37 (before taxes and service). To kick off the meal, appetisers include salads and this celery root veloute with pickled shiitake mushrooms, black truffle butter and chives. The soup itself was a great starter: luscious, warm and hearty, but I thought the sourness of the pickled mushrooms was too tart and jarring for this earthy dish. 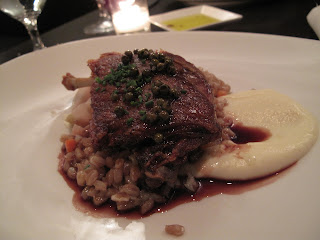 For the main course, I opted for the duck leg confit with parsnip puree, farro, glazed turnips and green-peppercorn amagnac jus. Duck leg confit is such comfort food that it is always very difficult to find fault with it, save perhaps that the duck leg was slightly on the small side. 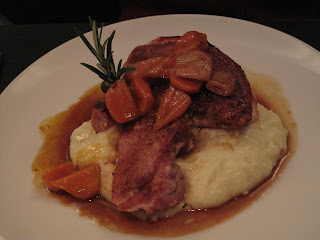 The same was not true, however, of S’s roasted organic chicken with potato puree, garlic confit, cumin glazed carrots, lemon and Madeira reduction. The bird was generously portioned and deftly cooked, full of flavour and natural juices. The creamy potatoes and the sweet carrots, as well as the heady Madeira sauce, rounded out this satisfying dish. 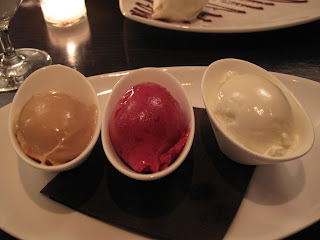 My trio of ice cream and sorbet consisted of three large scoops of caramel, raspberry and vanilla ice cream. These were delectable, but they were too much for me, and I doubt if I even finished one of the scoops. 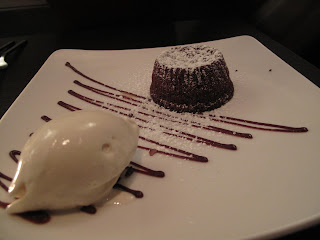 S’s classic molten chocolate cake is an old favourite, and Apiary’s version is dense and intense, baked from a rich chocolate batter and paired with a slightly sweet vanilla ice cream.

I discovered Apiary by Googling “most underrated restaurants in New York City”, and after sampling the food it’s clear how it’s gained that reputation. Treat yourself to a fine mid-week dinner at Apiary, but make sure there isn’t a blizzard outside when you do.