“When you’re in New York, you should visit Eleven Madison Park. The food is a bit pricey, but it is very good.” 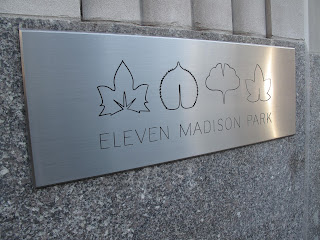 I was told this by a gourmand of impeccable taste, and so of course I told S to make a booking on OpenTable. The food is, indeed, “a bit pricey”: Eleven Madison Park only serves a prix fixe menu for lunch and dinner, and at $195 per person, you’d better have a really good reason for coming. Fortunately for me, I had two: I was in New York City on a holiday, and I had survived a hurricane.

Due to its legendary reputation, I had expected Eleven Madison Park to be something of a temple; stiff and snooty with food that was to be revered rather than merely enjoyed, and with staff who provided lectures rather than service. Happily, although the setting probably ought not to be described as “informal”, S and I were made extremely comfortable, and waitstaff were frequently at hand with superbly discreet timing and manners. In fact, the meal begins with a polite enquiry as to each diner’s likes and dislikes, to ensure that nothing but an ideal dining experience. 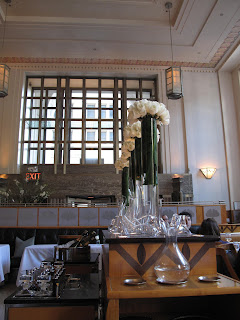 Despite the hefty price tag, the restaurant is almost always completely booked out and we barely managed to snag a reservation. Having said that, however, we did notice a few empty tables, although the cancellation of the New York marathon might have meant that some post-run bingers had to cancel their reservations. The menu, which contains 16 courses over 3 hours, makes the entire meal something of a marathon as well, and that’s not even including the visit to the kitchen. 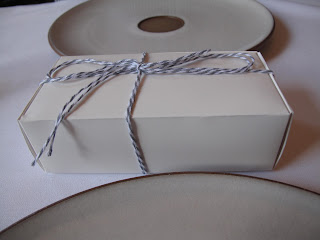 “Your meal begins with a savoury black and white cookie,” our waiter beamed, “Eleven Madison’s interpretation of a quintessential New York snack”. To be honest I’d never eaten a black and white cookie before, much less one that was made up of cheddar and apple fondant so tart and intense that my taste buds were sent racing. 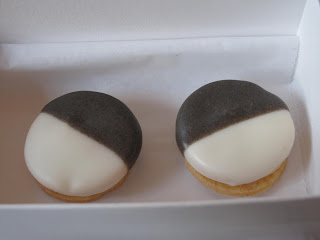 The black and white amuse-bouche immediately set the tone for the rest of the meal. Not only was it a creative take on a classic, if modest, foodstuff, in its technical execution it was virtually perfect, and immediately enlivened and inspired the palate for what was to follow. 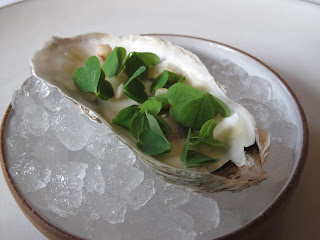 It is true that some of Eleven Madison Park’s offerings come a little close to being gimmicky, but the restaurant never loses sight of delivering superlatively fresh and tasty food, such as this simple raw oyster glazed with wood sorrel. While I am not the biggest fan of fresh oysters (I had forgotten to mention this at the start of the meal, but it’s a little hard to cover all bases), in one gulp I took an instant, extraordinary hit of pure coastal brine and oceanic minerality, and I could virtually imagine myself in some shallow rock pool fishing for more of these magical bivalves. 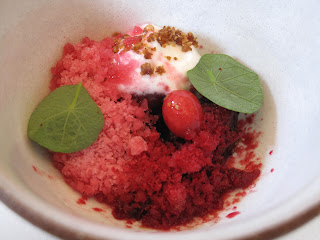 Thoughtfully, another palate cleanser arrives, ensuring that the salinity of the oyster tantalises, but does not overwhelm. The cranberry snow with beets, goat cheese and caraway is a delightful distillation of summer and winter in an explosive melange of tastes, colours and textures. The sweetness of the beets is offset by the slight sourness of the cranberries, while the frozen ice crystals intensify the flavours and cool the creamy goat’s cheese, which in turn rounds out the whole dish. 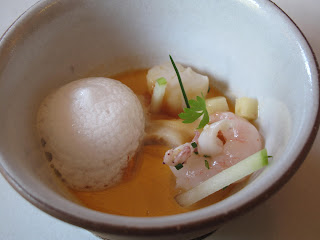 I’ve often wondered who first decided that a sea urchin would make for good eating, and what could possibly have made him think so. As Eleven Madison Park’s sea urchin custard with baby squid, bay scallop and apple demonstrates, though, sea urchin, when prepared correctly, is exquisite, especially when paired with adorably petite baby seafood. Almost, but I stress, only almost, too cute to eat. 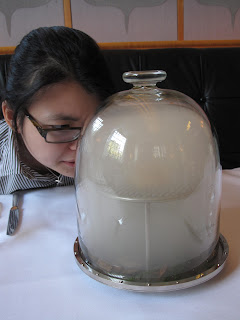 “Please,” said the waiter impishly, “don’t lift the bell jar”, and with that he walked off. “What do you think it is?” S asked, peering intently into the swirling opacity. 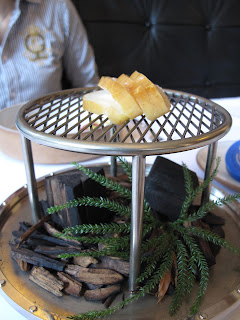 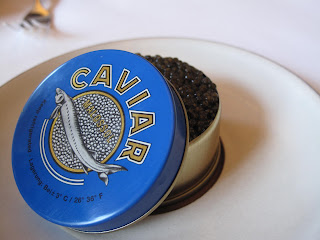 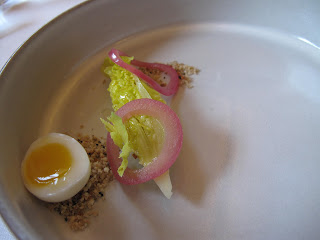 As it turned out, our next course was another updated New York classic: smoked fish. The dish was “sturgeon smoked with everything”, although strictly speaking only the sturgeon was smoked. I must say, however, despite the Plath-worthy bell jar, the caviar and the homemade pickles, I was not particularly enamoured of this dish. Perhaps because it had come after so many other wonderful starters, and perhaps because smoked fish is not something that lends itself to deconstruction, I considered this particular course to be more form than substance. 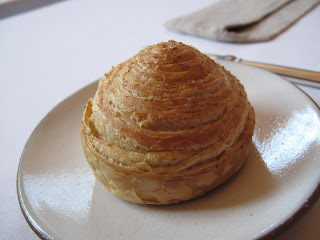 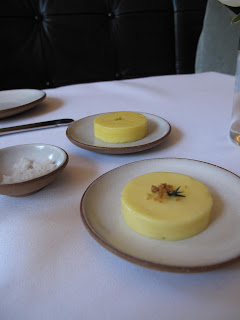 You know it’s going to be a long meal when the bread only arrives after an hour and a half, although I suppose the kitchen needed the time to prepare an extra helping of butter made with the fat rendered from the duck that we were going to be having later in the meal. 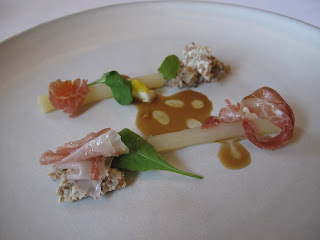 Next, we were offered salsify roasted with bulgur wheat and mangalista ham, which I also found to be somewhat unremarkable. 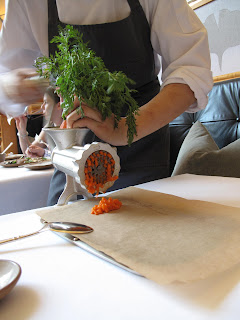 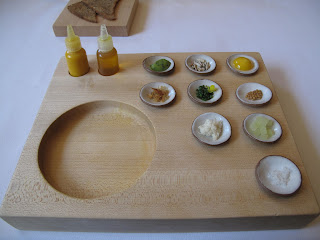 That ennui quickly evaporated, however, when a meat grinder was clamped to the side of our table, and we were given a wooden tray filled with a remarkable assortment of ingredients that included pommery mustard, pumpkin seeds and dried fish. Instead of meat, a raw carrot was passed through the grinder (although sinfully only about half of it was used), and we were encouraged to “play with your food”, by creating our own tartare using the ingredients provided. Gimmicky as it may seem, it actually was very enjoyable: the carrot mince is bursting with colour and flavour, while the “a la carte” approach allows the diner not merely maximum control over the taste of the dish, but also the chance to reconnect with that inner toddler in mixing and mashing to their heart’s content. 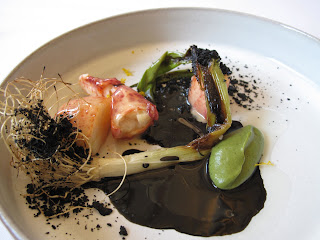 The seafood course took the form of poached lobster served with leek, black onion and shellfish bisque. The lobster met was, perhaps unsurprisingly, almost entirely from the claw, beautifully and succulently poached, while the shellfish bisque, hypnotically obsidian, was arrestingly intense. A superb and decadent dish. 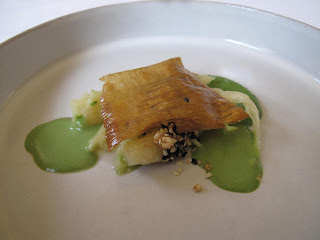 Parsnips roasted with sesame, parsley and Dijon didn’t really do it for me. I have no distinct memory of this dish, which I think is partly to do with the fact that vegetables are best done simply to allow their freshness to be showcased to maximum effect. 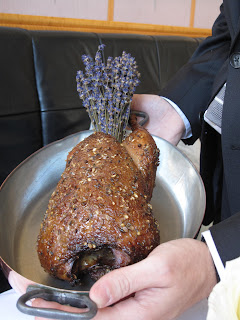 At the start of our meal, we were asked to choose (as a table) what meat we wanted as a main course: beef or duck. No matter what you choose, at some point during the meal a waiter brings out either a gorgeous rib cut or a whole roasted duck, stuffed with wonderfully fragrant fresh lavender flowers. Tantalisingly, they quickly whisk it away again to work their magic on it hidden away from sight… 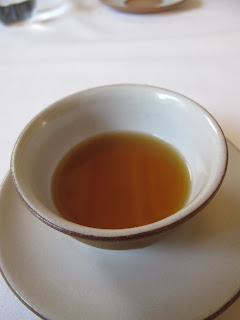 ... Only to return with the first of two courses that our fowl generously yielded up: a duck broth. Now, I have extremely tasty black chicken soup on a fairly regular basis at home, so I am fairly picky about broths, but it’s fair to say that this is one of the best consommés I have ever tasted in my life. It was pure duck essence, distilled down to a deceptively unassuming teacup, but bursting with a robust intensity that put Chinese restaurants everywhere to shame. I shudder to think of how many duck bones were needed for this broth, and how long it took to boil, simmer and extract every ounce of flavour from them. 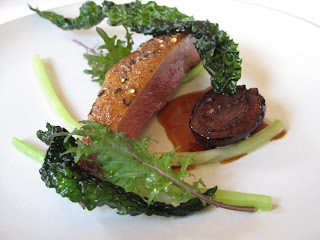 After that show-stealer, the slice of roast duck, served with a fig-like sweet plum and dehydrated vegetables, was decidedly outclassed. Don’t get me wrong; there was nothing wrong with it at all, but it was like getting Freddy Mercury to open for Steven Tyler. I did, however, wonder: what did the restaurant do with all the leftover duck? 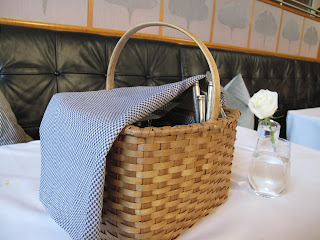 As the meal winds down, a little showmanship is in order, and pre-dessert begins with a quaint picnic basket being placed on our table, with an invitation to us to dig in and help ourselves to its contents. 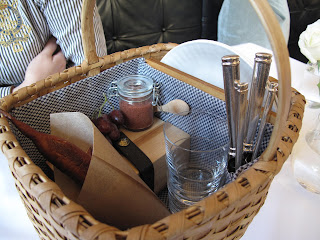 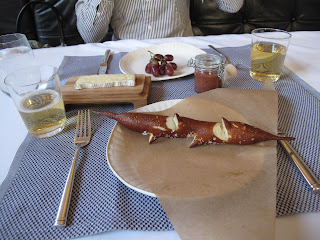 As whimsical as this course was, to be honest I was a little underwhelmed. The small sprig of grapes could have come from any grocery store, and the cheese was enjoyable but ordinary. The homemade plum mustard and pretzel were a nice touch, but not enough to really make an impact. In addition, for some reason, the table next to us (and evidently other diners who have blogged about having this dish) were given a bottle of custom brewed beer, but we were instead given some sparkling cider from a bottle that had already been opened. 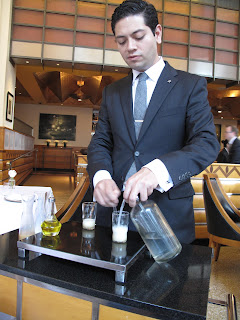 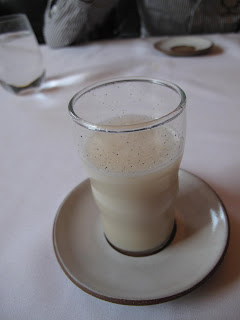 The showmanship continues with Eleven Madison’s tribute to egg cream, the classic soda said to be created in Brooklyn. This version, in addition to vanilla syrup and milk, featured a drop or two of sunflower oil, which I thought was a really interesting touch.

Having never had a classic egg cream, I have no idea how this version compares to an authentic egg cream, and I was not particularly fond of the combination of milk and soda water, which seems quite foreign to me. Still, I liked the idea behind it, and I think it’s important that modern restaurants keep classic ideas and tastes alive, or reintroduce them to a whole new generation of diners. 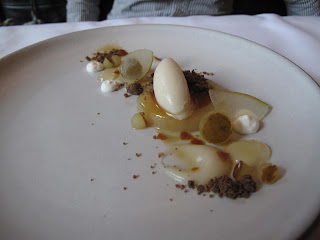 Dessert continued with a pear round which had been poached with honey, served with pear ice cream and gel, as well as powdered acorn dust. While pear isn’t exactly my favourite fruit, paired with the mild honey it made for a winning combination. 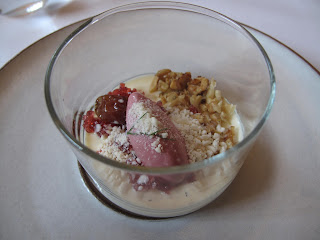 By the time we reached our last course of sheep’s milk cheesecake, with grape ice cream and red wine snow I was close to bursting. The cheesecake had been deconstructed, with a light pudding-like consistency that had been topped with fine textured nuts and crumbs, complemented by the lovely ice cream.

The final razzle-dazzle for the afternoon was a magic show put on for us by one of the waiters. His patter was good and his execution flawless as he cut, shuffled and forced the deck of cards which magically predicted what flavour chocolates we would pick (olive oil, espresso, rosemary etc). Cheesy? Sure. But when you’ve just had a meal as beautiful, languid and sublime as the one we did, who cares that there were a few gimmicky moments – it’s all part of a great dining experience. 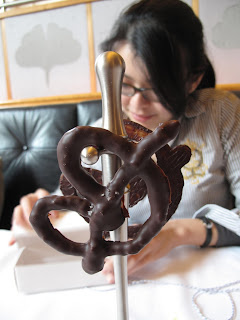 And just when we thought we’d reached the end of the meal, enormous chocolate covered pretzels which were sprinkled with some sea salt were brought out. Salty, chocolatey and chewy, these pretzels were awesome, and it was a shame that I was already so full. 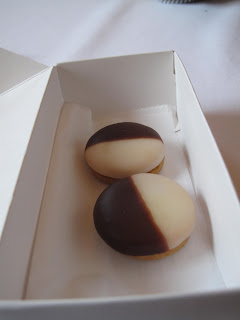 Clearly the restaurant is firm believer in perfect symmetry, as our meal ended with another helping of black and white cookies, although these were sweet rather than savoury.

After three and a half hours, our epic meal had finally come to an end. As a restaurant, Eleven Madison Park defies proper categorisation. It’s not French, not Italian, definitely not Asian, nor can it really even be called fusion or molecular. As an experience, however, it’s almost quintessentially American: creative and at times over the top, but served up with such passion, panache and well-meaning friendliness that you can’t help but be bowled over by it all.

great that you managed to get a reservation! which reminds me that i've yet to post my review yet. haha. cheers to good food and good dining experiences.