A Quick and Easy Christmas Meal 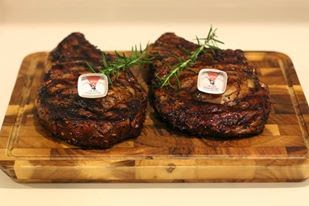 For those of you who are on the hook for Christmas meals and New Year's, here are some really simple dishes to throw together. I really enjoy making these because they practically cook themselves and leave you plenty of time to get the dishes done before hand, as well as be out of the kitchen and enjoying the company of guests. 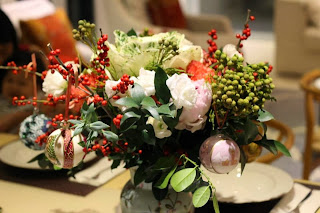 I'm not going to go into desserts, as there are ample recipes that we've done over the year and unless you insist on a creme brulee or souffle of some kind (wow, you really are masochistic!), most desserts can be, indeed have to be, prepared beforehand and at the most, warmed up before serving. There are also some like eclairs, or cake or trifle which are served cold. We did a dark fruit trifle of blackberry, strawberry and cherries this year, primarily because I had a round of pound cake, some cherries and strawberries left after making a previous stacked cake. 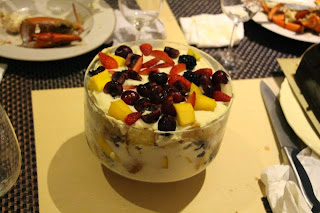 For a vegetable and a change from a cold salad, I like to make this simple dish of roasted brussel sprouts and corn. I had shown this salad in an earlier post but it is a very good one for large crowds particularly. It is both healthy and easy to make- I assemble the four ingredients ahead of time, bacon, which I slice and freeze for use, corn kernels which I slice off the cob, store in a tupperware and which can also be frozen, the brussel sprouts which I wash and slice before, storing in a zip lock and the cilantro, which can be chopped and put in a bowl or zip lock. 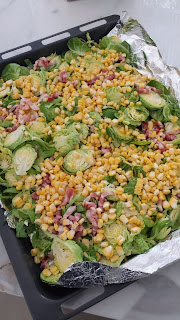 Assembly is simplicity itself, I just line a oven tray in foil and pour the brussel sprouts, corn and bacon in, give it a toss and roast it in an 180C oven for 20 minutes. When it comes out, allow it to cool and toss in the cilantro. The wonderful thing about this recipe is that it can be assembled pretty much anytime before your dinner and it can also be roasted before the dinner, as it does not need to be served hot. It also doesn't require any oil or butter (you can add these but it tastes just fine without them.

Another easy veg is a sliced potato and caramelized onion cake, as adapted from Jamie Oliver. You simply slice the baby potatoes and par boil them, which takes very little time when they are so thin. Arrange them in a dish, sandwich two layers of potatoes with the caramelized onions and toss them into the oven (at the same time with the brussel sprouts if you wish) and they come out golden brown. The only part that requires a bit more work is the caramelized onions but these can be done ahead of time, stored in tupperware and frozen for ease of use. Simply slice three red onions, cook them in a saucepan, add two tablespoons of white sugar when they soften and then three tablespoons of balsamic vinegar and continue to cook until they are limp. 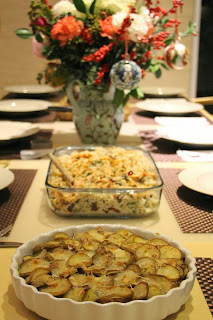 If this is too much work for you, simply line another roasting tray, spread the quartered, uncooked potatoes with some cauliflower florets, drizzle with oil, herbs and sprinkle with salt and roast together with the brussel sprouts. I love recipes that can all be cooked together, it saves energy and time to be able to roast both together in the oven and I often even add a third tray on top, of thinly sliced bread for bruschetta! 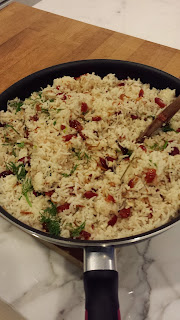 The other part that is really easy to do is a quick carbohydrate, instead of doing a pasta, which requires you to boil pasta right before guests arrive- there is little way to prepare a pasta in advance, I have taken to doing a rice pilaf or a rice dish with basmati rice, enriched with some veg and protein. This is my Christmas take on a salmon kedgeree- you might think that dry-frying is a very Asian technique but apparently (judging by the recipes of Nigella and just about everyone who has a kedgeree something), it isn't. 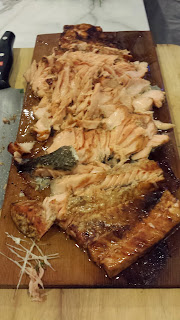 What I do is fry a tablespoon of minced ginger, garlic and shallots in a little oil (I use a little sesame oil for the effect) and then add 3 cups of washed and drained basmati rice. Fry the rice and then add a cup of diced white onion. Continue to fry till the rice is fairly dry, then push it all into a rice cooker and steam the rice till cooked. Halfway through the steaming, I open the lid and stir in a teaspoon of parika, a handful of peas, cranberries, fried shallots and chopped dill. It smells just heavenly! 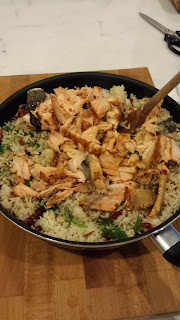 Again, this recipe is so simple and the steaming process means both that it can be done ahead of time and it will keep warm. I smoke my salmon piece on a cedar plank but you can just roast it in the oven, or poach it, anything that you prefer. In this instance, I flaked the salmon over the rice but you can also just serve it as a large piece of salmon lying atop the rice. The juices from the salmon seep into the rice and the whole thing is just potently delicious. It is a dish that is equally acceptable to older people, as well as to younger children, which suits parties. 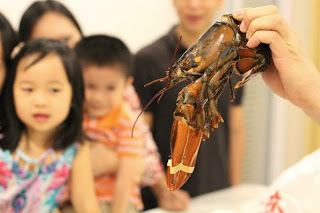 The last thing we do is make a meat, now this can be seafood, if that your preference, or a bird, or lamb leg or a steak or a traditional roast. My vote would actually be for a traditional roast, becuase it is the easiest to do, simply marinade, sear, roast in the oven and then pull out and carve before or as the guests arrive. It's just one piece of meat and it has to rest, which gives you ample time to get ready and mingle with your guests. 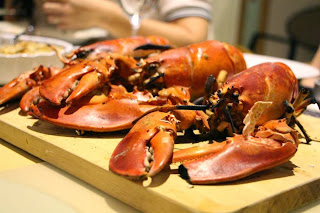 ﻿
﻿
It's also hard to mess up a roast, if you start with a quality piece of meat and it doesn't require too much fussing about or stuffing, just the oven or BBQ grill doing it's work. In our house though, it was steaks and lobsers this year, hot, crusty and juicy soft off the smoker. 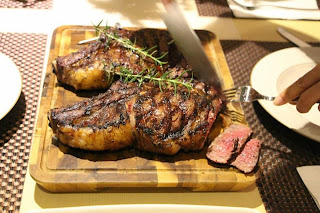