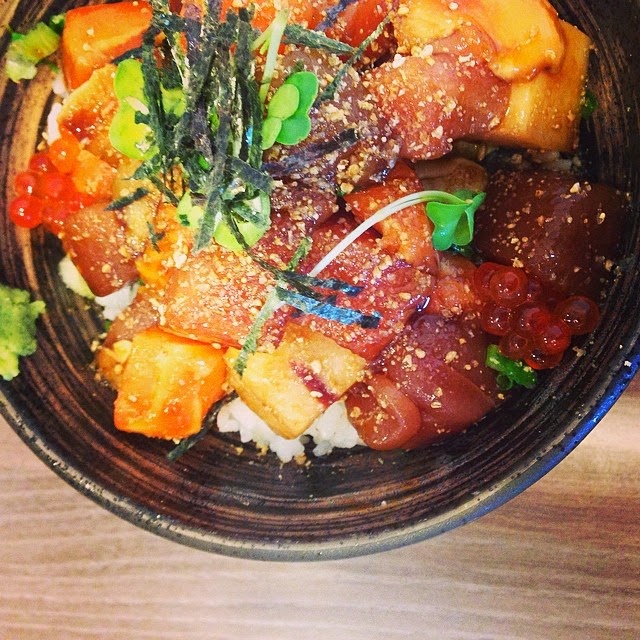 I myself walked by this place for months, always ogling the crowd and only belatedly kicked myself for not making a reservation earlier for their $60 dinner omakase. By the time I tried it, it was a choice of $50, $60 or $80 dinner omakase, that had wagyu beef and sushi as the margin-inflating extras.

As with all places that you go to with high expectations, it was inevitable that it should disappoint at dinner. But at lunch, where I had queued just a few days before, it was indeed a triumph to get a seat and I felt richly rewarded by the barra charashi that I'd seen online again and again.

Let's be clear, there is definitely a strategy for eating at Teppei. Lunch opens at 12 noon. The queue begins at 11am. There will be enough people in the queue, by 11.45am, to seat both the first and second seating. However, there is a lull at about 12.45pm when the whole of the first seating will have left. My observation after a few times, is that if you begin queing between 11.45-12 noon you can get into those slots. You will most definitely get there if you are in a group of one or two people, in fact, people who go alone get to the head of the queue all the time. If you have four people, you are out of your mind.

They won't seat you before your whole party arrives. And should you miss that 12.45pm slot well, then you will be waiting a long time. I think they do about 4 turns every lunchtime, at approximately $50 per two heads, that's 18 seats multipled by 4, and then $25, which is $1800 and an additional 50% takeaway, or $2700 revenue for each lunchtime. Which although substantial, actually isn't much for how hard the chefs work, and how many extra hands they hire. You'll see what I mean when you go.

The cheerful obliging man behind the counter is Yamashita Teppei, who hails from Fukuoka, Japan. The dishes at lunchtime are largely tempura priced at $16-19 and the barra chirashi at $16 which is a very decent mound of sashimi served in sauce atop a bowl of Japanese rice. There is a new special everyday, the day we were there, it was yellowtail sashimi and what we discovered after a few goes is that you can customize your barra chirashi (realized this because one barra chirashi is rather small and leaves you wanting). You can get an upsized barra chirashi, or one with tempura for $24.

Given the limited lunch menu, and the appetizers which you pick from table tubs- I believe it was hijiki seaweed, a small pot of oden and stir fried shredded pickled radish, the service is fast, efficient and hot. It is always really hot inside this place, but inside, the cool mix of ikura and chunks of salmon, tuna and scallops, topped with a yuzu ponzu and pea sprouts, is refreshing against the warm rice and the world is good. The chefs are buzzing and although everything is served out of plastic bags and packets, this place has a dive-bar type atmosphere that makes it kind of hip.

I have to admit that going in for dinner, was not without reservations. Haha, a good pun since reservations are what indeed you will need, the place is booked solid for most of the year and opens again in September for October-December reservations. I had seen pictures from my friends and between the rough thick sashimi, the random skewers and the slightly wobbly food texture, I had my doubts, but when offered a chance two 6.30pm seats late in the day by a absentee friend, I felt I couldn't turn it down just the way I suppose Singaporeans queue for Hello Kitty, or Taylor Swift tickets. Just because it's rare!

I don't know if there were really 22 courses, I didn't count but it's true that there were many many small plates. I felt a bit cheated that many of them were poked on satay sticks, like one broad bean, one thin sliver of Japanese tomato, one leaf of 'ice vegetable' that was handed to us by the assistant and one crispy orange little crab, also shoved onto a satay stick. The sushi was handed to you, in individual metal spoons. Those were 'courses'. One broad bean is not a course. Not in my book anyway. 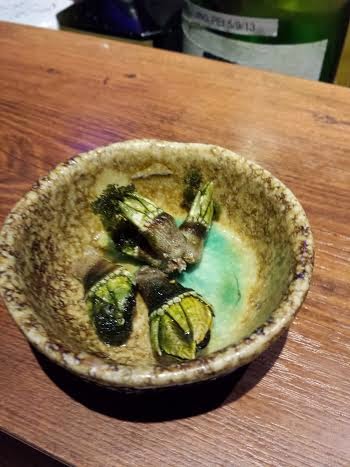 There were also little itty-bitty saucers of again, sauteed dragon's beard vegetable, oden and three sad-looking char-grilled edamame (tasted the same as non-grilled edamame). There was an unappetizing, small salad that was served at room temperature, symptomatic of the lack of refinement in the food, just stuff served out at a breakneck pace. A plate of four or five roughly-hewn sashimi, salmon, salmon belly, tuna , hamachi (yellowtail) and swordfish. A deep-fried tiny fish with a slice of lemon. A slice of meaty fish tempura, with a slice of lemon. A bowl of ten littleneck clams, served in soup with a lemon. The clams were sandy. There was a small saucer of what the chef and assistants told us were Dinosaur. "But what is it really, is a clam or a barnacle", as that's what the gnarly footed shape looked like. It's Dinosaur, they said blankly. For the record, when you break off the shell, it evinces a small red flesh, similar to a crab leg, though not as chewy as a sea snail.

Everything tasted, a little briney. The fish tasted a little briney, the crab, the dinosaur, even the ice vegetable tasted briney. It just didn't taste fresh and the mouthfeel wasn't right, it wasn't turgid and distinct. For $80, I feel that I can get a full sushi/sashimi meal, at a decent if mid-range place like Hakumai at International Plaza or even Akashi, so it didn't feel like a steal and I walked out feeling slightly moorish in the mouth, like when you've binged on over-oiled yet slightly tasteless supermarket sashimi.

The buzz at dinner, was quite different from lunch, when the air was cooler (but still smelly on the clothes) and you ate with a line of people outside. At dinner, the area is deserted (it is Tanjong Pagar, after all) and the restaurant just seemed to get hotter and hotter as the two hours wore on. The shirts stuck to our backs and it became actually a bit unpleasant, especially as you could see the chefs busily preparing the next courses for the next seating at 8.30pm.

The best courses, I felt, were the Negitoro handroll. It came wrapped in a crisp seaweed with flavourful soft negitoro, wrapped with crispy tempura bits. The tenkasu really made the roll. I also liked the uni scallop sushi, the shabu chutoro, the chawamushi (pretty regular but tasted of milk and sweet potato at the base) and the slice of wagyu beef fried with crispy garlic and scallions.

By the time we came to the mains I wasn't so much full as I was, tired and confused from the array of little tastes and dishes. The choices are Fried Rice with Sunny Side Egg (spicy), Sashimi Rice, Soba(hot or cold), Udon (hot or cold). I was hoping the sashimi rice might be the same as the lunch's barra chirashi, but it was instead, four metal spoons, containing four kinds of small sushi. I had the hot udon, which was plentiful with pink-rimmed fishcake and wakame. Dessert was the choice of a scoop of Yuzu, Green Tea, Sesame, Calpis or Salted Caramel ice cream.

All in all, it is a decent amount of food, if not a lot of food, for $80, but I think the sweet spot in pricing is probably $60. It isn't very good quality and I dare say the standards have dropped as the restaurant has become really busy (I've personally experienced this even with the takeaway at lunch), but for an experience with friends, I would definitely still go for lunch, though probably not for dinner. I didn't manage very good photos at night because of the low light but there are many reviews online that have lovely pictures that make the food look very appetizing like here at PinkyPiggu and here at SGFoodonFoot.