Look at my little bee's behind

I attended Shermay and Joycelyn's cupcake class a few weeks ago and had a great, girly time. I often find that for many of their classes, the range of dishes is too wide, such that it incorporates both things that you're interested in and things that are really basic (case in point, I'd love to learn the Patissier's chef recipe for dense chocolate cake but tiramisu? That's a tad too common. Also, for a japanese class, Hijiki seaweed is basically dried seaweed boiled in hot water and served as a homestyle soup. Unless you plan on growing the seaweed yourself, it's really not something you need to learn. This I remember very well because when I told my Japanese housemate in college that I liked this dish, she remonstrated that I had very unimpressively peasant taste in Japanese home cooking which wouldn't stand me in good stead if I ever met a nice Japanese man). This class though, was focused, pitched at the right level and was chock-full of helpful tips from Joycelyn. She really knows her baking inside and out and in case you're wondering as I had been, yes, she really does have the perfect precision, drip-free prep that you see in her blog pictures. In person, she is generous and helpful and on top of that, can I just say she is super cute, stylishly-turned out and petite. Urgh! I hate how Singapore makes me feel like a giant in girl's clothes.

I digress. The culmination of any cooking class is in a sense, making the products for yourself. Before I could get lazy, I hopped off to Sun Lik, which was a recommendation from Joycelyn, for some new baking supplies. Sun Lik is at 33 Seah Street, right next to Raffles Hotel. From the outside, it looks like dinghy, uninviting old shophouse but inside is an absolute baking mecca. I've never seen so many trays of decorating devices and applications in other places in Singapore and I had to stop myself from buying much more than I needed. I've been told that there is a cake decorating store in Bukit Timah just past Newton Circus and also, Phoon Huat has great supplies but I really liked how Sun Lik packages some of their decorations, like hundreds and thousands, into sturdy little containers so that you can buy them in smaller amounts and can keep them fresh. Also, unlike in other places, the ladies who run this place are very helpful and nice. Here are some photos of mixing up the chocolate cupcake batter, it comes out very runny but I like that it uses a light, frangrance-free oil (I used grapeseed but sunflower can also be used) which is healthier and that the cupcakes are beautifully moist. There isn't much chocolate powder in the cupcakes so it's important to use the best quality Valronha chocolate, other than that, its mostly flour, sugar, eggs, vanilla essence and hot water. The cupcakes also bake pretty fast, a lot of recipes I've used say 20 minutes but are really an hour in the oven. This one really was 20 minutes and here are my finished cupcakes. I made two batches of icing, a icing sugar based royal icing and a buttercream frosting, both in yellow, to match the colour theme of the party I had been invited to. While both are pretty, I thought the buttercream made for better pictures. Here are some of whipping the buttercream and adding the yellow colouring gel. A great tip from Joycelyn was to use these gels instead of liquid colouring because the consistency of the mixture is better maintained. This I found to be really true and I had to stop myself in Sun Lik from buying the pretty petite gel containers in multiple colours. (I think they have a different gel for pink and red, which is Such an evil sales tactic). Also, I added two big tablespoons of acacia honey, which apart from lending a flavour, gave a stiffer texture to the buttercream. After the class, I finally learnt the proper technique ....no, that's not true, I had always known the proper technique, I had just not practiced it, of filling the piping bags. I practiced it this time because Joycelyn said so. However, I glooped a big drop of frosting onto the table in the process, that's just me, the world's laziest baker (ask my brother). For those interested, the proper technique is you snip a hole, push through the piping nozzle (partway, not the whole way, which will happen if you snip the piping bag hole too big) and then you can either tape the bag to the nozzle or count on gravity to work well. Then you place the bag, nozzle down, into a container and roll the top of the bag down the edges (a bit like preparing to put on a sock). Drop the buttercream into the bag (not on the table) and when it's done, pull up the bag out of the container and force the cream down toward the nozzle, twisting the top of the bag into a tight knot as you go along (don't actually tie a knot, then you'll trap air into the piping bag, bad idea). Now, the fun begins! Holding the piping bag perpendicular to the cupcake top, pipe in a swirl, starting from the outer rim of the cupcake and ending in the center. If you can't control the stream of buttercream, there are somethings that you could try- hold the bag on the top with your right hand, guide with your left hand on the bottom of the bag (unless you're left-handed then vice versa), you could possibly have made buttercream that's too lumpy, or too liquid, or be using a piping nozzle too large (for cupcakes, I use a 3/4cm diameter piping nozzle in either star tip or round tip, depending on whether you want your swirl in classic fat round worms or a more sophisticated grooved sour apple candy string). Or you could just not be very mechanically inclined and have chronically unsteady hands. Seriously though, everyone has piped cream at some stage of their life, whether it be playing with toothpaste, or hair gel, or hair mousse, or foundation, or soft serve ice cream...you get my point. It's not that hard. Maybe a little practice. After the piping, I coloured some marzipan yellow, rolled more marzipan in chocolate powder (because I was too lazy to make chocolate putty which yields a darker colour stripe and eyes to your bee) and broke out the almond flakes. Behold my fleet and swarm of little cretins... Then to assemble, take your piped cupcakes, gift with a pinchful of hundreds and thousands, push on two little bees (if you leave the cupcakes for too long in the fridge, the buttercream will harden and you won't be able to make your bees stick, either leave the cupcakes out to thaw or prod the bees a bit harder) then slice up some cadbury honeycomb chocolate bars, or violet crumbles (do you know the difference? Cadbury Crunches are milk chocolate covered honeycomb bars in golden yellow wrappers, Violet Crumble is a Nestle-produced chocolate-covered honeycomb bar in a purple wrapper which is a bestseller in Australia. The Violet Crumble honeycomb has a finer-grain texture while the chocolate has more malt in it, such that it resembles a darker, Malteser chocolate. Neither will withstand the humid weather in Singapore well and will turn dark yellow in a matter of minutes but I tend to find that Cadbury Crunch will be less sticky when that happens). Yes, I don't mess with my candy, how *you* doing? 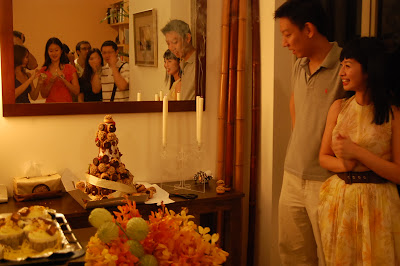 The final picture...and happy birthday TQ! I've decided to submit this post along to Winos and Foodies.com, a cancer fighter herself, for her A Taste of Yellow for Livestrong day in support of the Lance Armstrong Foundation's advocacy awareness program for cancer. Please see http://winosandfoodies.typepad.com/my_weblog/ for more details, the different entries and if you want to submit your own yellow food recipe.
Posted by Weylin at 12:38 AM