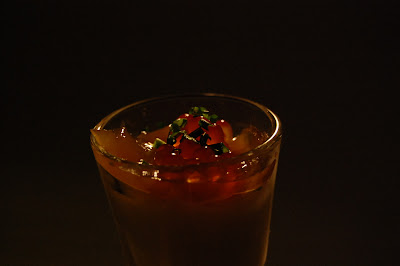 How do you celebrate Mothers' Day at your house? Write in and tell me! This year, I bought my mom a design edition Thakoon for the GAP white shirt and decided to help my dad out and cook a dinner for a group of close family friends. We had four mothers in the crowd and a great time over dinner! My brother, stylish as always, sent a cake from The Patissier from the UK.

For the menu, I picked something special (a giant bistecca florentina that Billy and I had carted all the way from Panzano, Italy), something old (pumpkin soup) and something new (a trio of seafood in a garden amuse bouche). Of course, also a sampling of desserts, starter plates of prosciutto and bresaola that we had brought back, olive salad and some great wines. 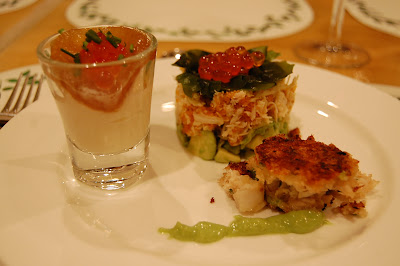 First, the amuse bouche. The first part was the shooter; this was inspired by a trip to Aqua in Sydney, where they used dashi jelly as part of their ingredients. I love dashi and I use it for Japanese soups and stews but I was intrigued and impressed by the simple (and modern) idea of making it into a semi-hard jelly. Into the glass goes a layer of cauliflower puree, then the dashi jelly, which is made of dissolved dashi in hot water and gelatin, then stamped out into little rounds and finally, a little mound of ikura (salmon roe), topped by a sprinkling of baby chives and finely grated lemon peel. The presentation is key and the idea is that you move from the saltiest taste, to a less salty one, before the distinct, piscine brininess is blanketed over by the blandness and creaminess of the cauliflower puree. Lots of tastes in a little space. Below, I took a very crude picture of the stamped out dashi jelly to show you what I mean. I tend to use my dashi very strong (no point not being able to taste what it is!) and also use a fair bit of gelatin because I don't like it when the jelly sets too wobbly (in which case you can just cut it into cubes and serve it anyway) and also to speed up the time in the fridge. This is a great little thing that can be prepared way ahead of time and quickly assembled. 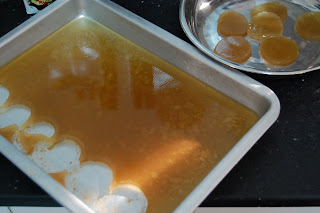 The other two recipes came courtesy of CH and his lovely wife S, who were kind enough to describe all the ingredients for me. The first you will recognize as his deconstructed california roll- a layer of avocado in a metal ring, steamed crab mixed with mayo and in my case, some light orange tobiko, topped with wakame and ikura. You can actually flavour this dish, adding sake and mirin as the recipe calls for, or adding more interesting flavours like replacing the lemon with an orange. This is fairly simple and I won't repeat the recipe here (you can check out this link for the exact instructions) except to show what dried, then soaked wakame looks like. 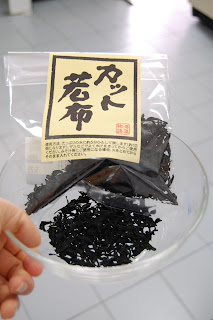 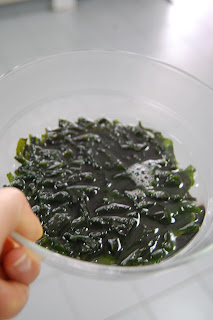 The last part of the amuse bouche was the crabcakes fried with Japanese panko, with wasabi mayo. Although the recipe called for cod, I was shocked at the prices of Chilean seabass, so I used only a bit of seabass and bought some local fish to supplement the steamed crab. You should really just get the freshest kind of fish because it will be firm and won't release the kind of water that comes from most of the seabass which enters Singapore pre-frozen. 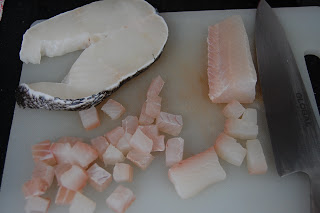 The bistecca was such a breeze to cook, it doesn't really bear writing about. It's just too awesome a piece of meat. More posts to come about the whole Italian trip and how the bistecca is such a gift from God that it can't be improved on in any way...but suffice here to say that we seared the surface with herbs, some breadcrumbs and a little balsamic vinegar and red wine mixed, then salted it with good quality Italian sea salt and roasted it for three hours in a low 100 degree oven. You can also pull it out right at the end and smoke it over a charcoal and hickory open grill or fire pit but we took out that part as no one fancied smelling of charcoal and sweat themselves. 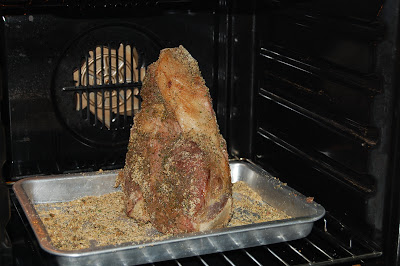 We served the main with some tossed pesto pasta topped with cherry tomatoes baked in their own juices. Easy peasy! 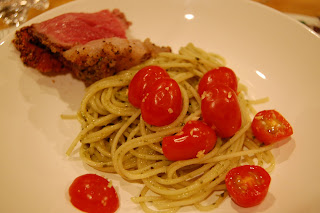 The dessert was challenging only because my ambitious plans to make green tea opera cake fell through because the green tea buttercream didn't set (happens to the best of them and pooh the recipe was clearly lousy), of course by then I had already made a chocolate ganache so I changed course and made a heavy Italian dessert- little glass pots filled with green tea sponge joconde, Valrhona chocolate ganache and raspberry puree. The sponge joconde was quite a brilliant yummy recipe- my dad ate all the scraps so that's a good sign and the little glasses packed a punch! The other dessert we made was an awfully simple sticky toffee date pudding, I haven't the photos so I won't post the recipe just yet either. We paired it some warm cream whipped into a melted brown sugar and tawny port sauce. 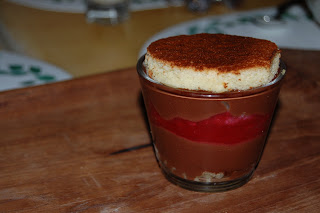 Noble One in Australia, should you ever go to Yarra Valley, has a brilliant Sticky Wines tasting for just $5. You get to try their sweet botrytis semillion dessert wine, the Noble One Black, which is this interesting, complex, somewhat awful black dessert wine that has botrytis but also hints of molasses, balsamic and ginger, as well as their whole range of ports. I don't actually like port but when I tried this honeyed, tawny, toffee port, I could only think of sticky toffee date pudding and bought it (so cheap! $27 for a beautiful bottle and sexy red and black case) to complement desserts.

I hope all the mothers had a great time, I think the fathers definitely did. The best thing about the dinner was really not the food, it was the family and the camaraderie among friends. It was lovely for me, to spend Mothers' Day in the company of all these women who have for so many years, given me such support and guidance. This is a belated post but Happy Mothers' Day, Mom! 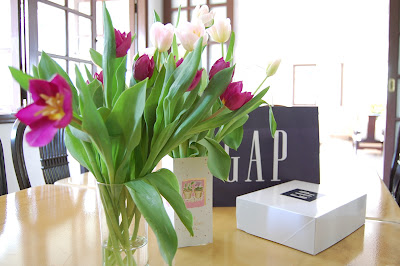