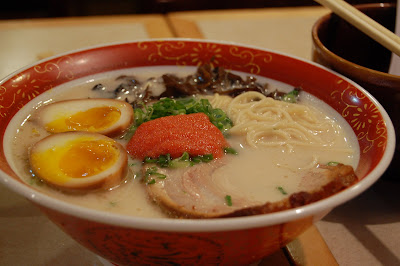 I’m so behind in my blogging, it’s not worth blogging…about. The reasons are all the usual, including a new one, which is that I’m also doing reviews for the StreetDirectory.com. For those of you who know it (and ain’t that all of us), they have a hugely impressive hit rate and they are definitely the go-to site for driving directions, bus guides and even to map out your jogging distances. What you might not be aware of, is that they have new food review pages. So if you are looking for an eating place near wherever you’re going, be sure to check it out, they’ve got a very comprehensive list of restaurants and obviously, you should check out the reviews done by yours truly.

I’m a very honest person…not just honest, but blunt, really. In truth, I don’t like to tell people how to cook. I’m definitely not one of those aunties who can’t eat a meal without saying how things could have been better done. I’m usually too busy being grateful that someone saw it fit to chop, sauté and cook me real food. That being said, I can be very critical when it comes to restaurant food and I usually only blog about food that I like and that I can say good things about (or say something about). It’s actually very difficult to be a food writer. Other than having already grown to dislike the little schpiel I have to give about internet traffic at each place, I’ve come to appreciate the freedom of content and structure that this blog offers and that perhaps it's sometimes really not necessary to be as honest as you can be. Just be prepared to read all the good stuff I can’t write for other people, in my own blog.

That’s also why I was so thrilled to be going to this place. Tampopo in Liang Court, otherwise known as the Home of the Kyushu Pork Bone Ramen. Mmmmm…just the sound of the ramen makes me salivate and I start thinking of warm clear soup, smooth noodles and savoury pork straight away. There’s no way I’d be stuck for a review because personally, I love this place. Back up, back up…

I find ramen to be comfort food and when I first came back to Singapore, I went on an extended hunt for Singapore’s best ramen. You name it, I’ve tried to try it. Miharu Soba at Gallery Hotel, the soba at the basement of Paragon, Tampopo..many things have been said about ramen places, especially with Singaporeans being the discerning Japanese food connoisseurs that they are. Is Tampopo’s ramen the best? I don’t know…the jury may still be out on that one and there are after all, so many new contenders. It is though, my favourite among all the ramen shops and the one that I think has the best taste-value-atmosphere balance.

Tampopo is an ambitious name, if you name your restaurant after a cult Japanese food movie, you better be living up to it! This Tampopo is adjoined to the Meida Ya supermarket (a plus because the produce is fresh) and they have a sister restaurant Tom Ton, owned by the same Japanese guy (the ex-head of the Pokka Corporation, 30 years in Singapore!) which is a tonkatsu restaurant and which you can order in from. The location is strange and a little LC (if you don’t know what that stands for, you’re not properly Singaporean) just because it has these dark blue Japanese curtains and pinewood furniture and slates through which you can spy on other diners.

The concept is very open, so you could conceivably see across to the supermarket and the waitresses zoom around with palm pilots and the food service is fast. You'd probably rate the ambience of this restaurant higher or lower, depending on how you feel about Liang Court (which is currently undergoing minor renovations to style itself more outwardly as an Asian Life-Mall) overall and being within sight of Meida-Ya. Over a couple visits though, I have come to appreciate the place because it’s totally accessible from the basement carpark of Liang Court and on top of having ample parking, it’s casual, it’s speedy and it’s fun!

We’re all here for the food though, right? So check it out…the first dish I had was a Mizuna and Sakura Ebi Salad ($7) with Wafu Dressing, this is a light, clear-tasting and crispy salad, the kind of thing your mom would like and you will like on a day you feel fat. I was talking to the chef Heong and he said that the salad leaves are kind of like yong choy, which if you are Cantonese like me, means the kind of bitter vegetable you submerge in steamboat. Apparently they bring them every day from Japan, so what do we Singaporeans know, maybe you can create this at home with your very local wet market produce. 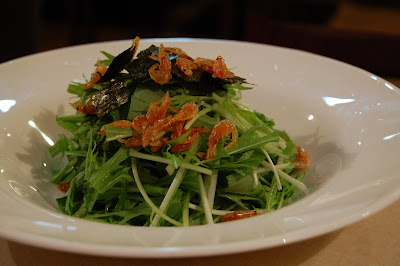 The second and third dishes were ramen, the signature Black Pig Signature Ramen ($13.90) and the Pork Bone Kyushu Ramen ($12.80). The Black Pig ramen is mixed with bamboo shoots, cabbage and lots and lots of red chilli flecks, if you’re a fan of spice, this is the one for you but since I’m not, my favourite is the Pork Bone Kyushu ramen. The soup base for both is the same, a brother boiled from pork bones over 2 days until the soup becomes slightly thick and milky (and in case you’re wondering, absolutely no milk is added, chef’s honour). 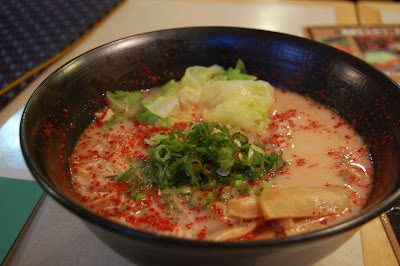 I don’t get why the Pork Bone Kyushu Ramen (which is the first picture on the post) is cheaper because it has better ingredients, the fatty pork swirl (so bad but so good..), the dark beard- fungus (doesn’t that sound fear-factor gross?), the egg which looks like a duck’s egg with a runny yellow yolk but is actually a normal chicken egg but braised in some special way…and the winning touch- the splotch of spicy cod-roe mentaiko. Brilliant. I eat this possibly every month? At least every two months. It’s good for you and makes you grow big and strong and beautiful. 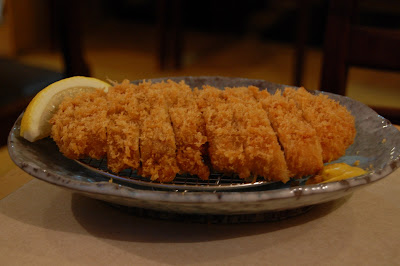 What doesn’t make you grow beautiful, probably, is the tonkatsu, or the Black Pig Tonkatsu Cutlet ($19.50) which can be ordered in from Tom Ton. Tom Ton makes a whole bunch of different tonkatsus although this Kurabata pork cutlet is the best there is. The reason you probably won’t grow beautiful is because this is deep fried with a batter coating which is crispy and filling at once but oh, so good. A little oily but with the sharp mustard to balance out the sweet meaty juices that come out of the tonkatsu, this is a great lunch by itself (or in the set) or as a counterpart to your ramen dishes. I don’t even like Tonkatsu and I like this.

I’d never tried the desserts before at Tampopo and I’d always been skeptical because I’ve had too many good meals that were let down by the desserts and also because they only advertise their desserts on a little puny transparent plastic stand on each table (right next to the disposable chopsticks so how good can it be right..) but the good thing is this time I got to try two signature desserts made by their dedicated pastry chef. This is the Scoop Short Cake ($5.50 per piece) and ho hum, it’s a harkback to everyone’s childhood. I was tempted to say it tastes of a mouthful of fresh cream but that’s not doing it real justice. While I was a little horrified at the amount of cream, it’s true, the sponge joconde cake is fresh, light and brought back all these memories of every good sponge cake you’ve had as a birthday kid. It’s sandwiched by layers of strawberry and apricot and the presentation with some sprigs of mint was colourful and lovely. 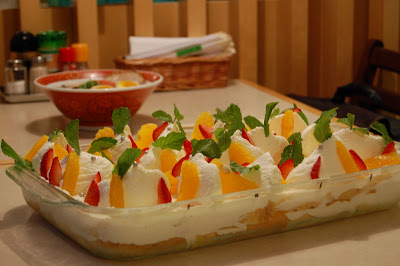 I also had the Whole Orange Jelly ($5), which is actually presented in a orange. There is firm jelly and there is soft jelly, this is the latter, it was a bit too murky and soft for my taste but there were great giant chunks of navel orange in it so that kept the dessert light and sweet. It was a good ending to the meal. If you want to try these, you should do it soon as I understand the prices are going to rise. Who says there isn’t inflation in Singapore eh…? 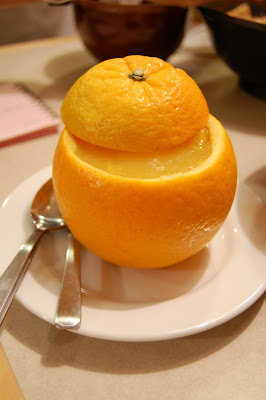 One thing that I should mention about Tampopo is that although I am a fan, I have never been satisfied with their sushi and sashimi. I simply don't order any because I've never had a good example of raw food there. It's their one weak point and you can kind of tell by how the sushi counter is hidden way back in a corridor of the restaurant. Try the grilled fish and cooked food instead, there are so many variations of ramen (including a cheese one) and the grilled mackeral is just $7 for a generously-sized fish.

Another quirk of the restaurant which I just have to mention…just because this really is my own site and I can say what I’m thinking…is their extremely particular manager, Kelvin. When I first met him, I used to dread dealing with him because he was curt, grumpy and somewhat disagreeable. Catch him on the wrong day and he’s likely to bark down the phone at you or make you wait for seating while he takes orders from a table of one parent and ten kids.

He’s not going to win the Singapore Service with a Smile award anytime soon and I have rarely seen him happy, except when wishing you goodbye but really, he’s harmless, he’s a character and I actually appreciate him now as a part and parcel of what makes Tampopo unique. What he needs to perk him up and put a smile on his part growly, part deprecating face, is a We Heart Kelvin fan club. (Please don’t spit in my food Kelvin, I really am actually saying you’re an individual). I also met Akaemi, who is their reigning dessert queen-chef, a demure, shy Japanese lady that’s just a sweet, sweet kawaii girl who’s been in Singapore a couple years and is devoted to her desserts and daily dessert specials. Everyone say Awww because I sure did, just talking to her.

If you don’t feel like Hearting anyone, then give Liz Tey a call when you’re next visiting, she’s the superwoman administrator there, with the cheeriest smile and laugh I’ve heard for awhile. Tampopo opens from 11.30am to 10pm daily but their last order is at 9.30pm and they are opening a new branch at Central, which will specialize in Shabu Shabu and Robutayaki. I can’t wait to check that out.