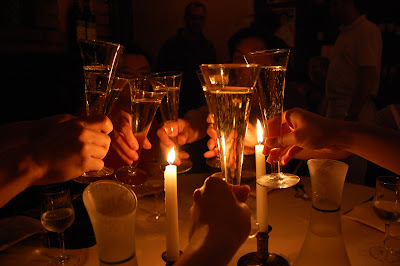 The reason I talked about some cooking as part of Day 3, which it really wasn't, is because Day 3 only had one real culinary highlight. Day 3 was Monday, the day before the Labour Day holiday and it was also by Monday that we had settled that we would eat one really filling meal each day and one sort of cheaper, home-cooked or light meal.

Monday was also the day when the girls woke up bright and chirpy and early and the guys all slept in. Now why was that? It was because Day 3 had long ago been designated the Gucci and Prada outlet shopping day.

We arrived at Montevarchi at the Prada/Space outlet by 9am. It was heavenly. A huge space of bags, rows and rows of them, all half or less the price one would pay in a second-hand shop in Singapore. Racks of clothes, beautiful suits in jewel colours, dark sober dresses stiched to pleated perfection, shelves of sunglasses, polished leather shoes with snazzy narrow toes and trays of wallets, woven and metal plated belts. We did some mad shopping, I bought an adorable structured metallic silver boxy bag and got a birthday present of a classic dark navy dress! C. bought a gorgeous ridged leather black lawyer document bag with long handles and S. the most knock-out gold embroidered snap-closure bag.

Then we got back in the car and drove to the Gucci outlet, which was a mall of Tods, Bottega Veneta, Ferragamo, Marni, Pucci, Rossi and YSL shops. Most of shops were a little disappointing but I picked up some great flowy work blouses from YSL in summary colours and the girls bought an array of colourful Tods loafers. We also ate lunch at the little bistro there.

Late in the afternoon, (ok, I know, this isn't a shopping blog) we drove ourselves to Florence and explored the city, winding up in a little back alley near Piazza Salvemini and Santa Croce, where we had booked dinner at La Giostra. 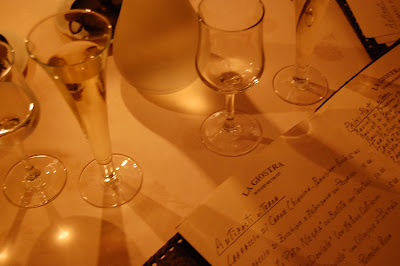 La Giostra is a wonderfully romantic brick-lined restaurant and the chef/owner is Dimitri d'Asburgo Lorena, a Hapsburg prince (with some local Medici blood for good measure) who runs this fairy-light lit restaurant of just 16 tables, merely to indulge his love of cooking. 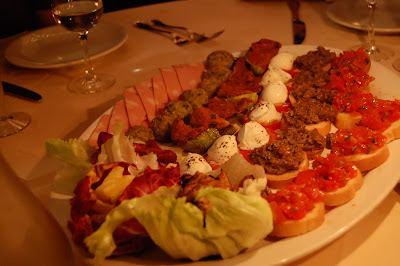 They start you off with a complimentary flute of spumanti (sparkling wine)and bring out a complementary platter of various meats, cheese, and small vegetable appetizers, all delicious. There was bruschetta, small balls of mozzarella, even some pate made with donkey meat. We also ordered a plate of top-grade black pig ham. Kurabata in Italy? 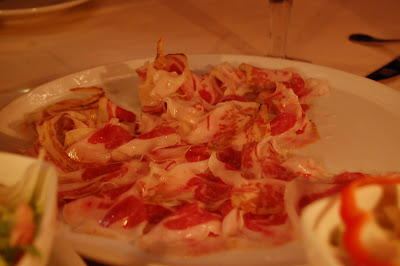 The primo platti were all amazing. We had the homemade pasta with ragu and the black truffle risotto, both of which I could wax lyrical about but nothing really can be said except that you haven't tried pasta until you've been to eat in Italy. 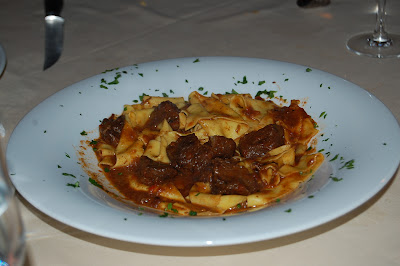 I could have cried about that risotto, I really could have, it was the most exquisite thing to eat because you could taste every single grain of rice, pearly yet chock full of taste and broth. I couldn't even take a picture of it, the light was that bad and I was that moved. 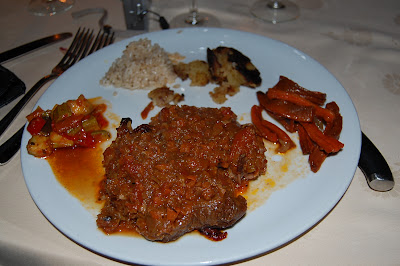 The meats were also excellent, we had a veal chop of sorts and a blueberry steak. I apologise that the light really wasn't working in our favour (the candles were blowing out by this point) but the dishes were very tender and the blueberry sauce for the steak was perfectly balanced. 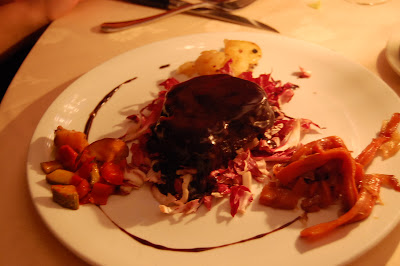 Although I was adverse to the whole concept, the taste was totally not offensive, nor jarring, in fact, it tasted as if it was really meant to be a blueberry sauce on steak! 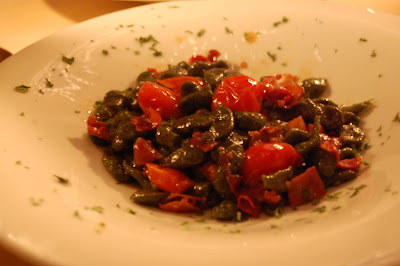 What wasn't good though, and this was the one dish that was a disappointment, was the gnocchi. I am a huge gnocchi fan and this lumpy Dr. Spock-ish green dish really didn't cut it, either in taste or texture. 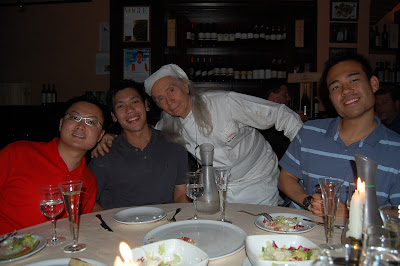 The dessert on the menu was a Tiramisu-su-su-su and Mr Hapsburg Prince himself came around for photos and to explain that Tiramisu means literally "to take me up" and therefore this one was so sublime, that it would take you up, up, up and up! How cute! And not just cute, as some restaurants specialise in being, but convival, charming and on top of that, gorgeous cooking. 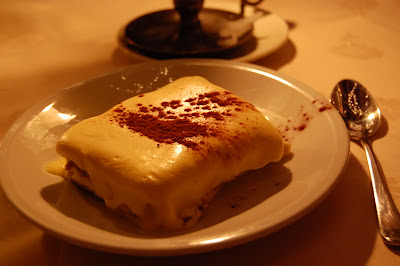 This was the second-best meal that we had in Italy. The first would still have to have been in Panzano, for the butcher's kitchen was still just that bit more loving than a Hapsburg's prince's play restaurant. We agreed though, that what they had in common, was that through their space, their food and the chef's themselves, these two places had succeeded in creating a happy environment, one that, (rather like Disneyland) all humans are drawn to and find irresitable.

For sure, if the world had ended that night, I think we would have all died happy.