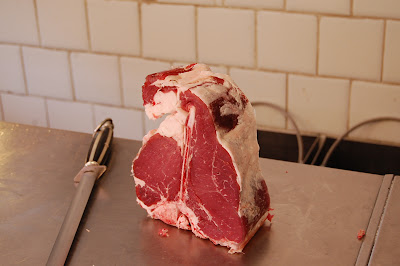 I had heard a lot about this piece of meat before going to Italy. I had even tasted one before, having had food-minded friends and family pass through Tuscany. I had read Heat by Bill Buford (everyone should, it's a great story) and knew my Mario Batali from my Marco-Pierre White. I had even researched Dario Cecchini and his most famous produce before heading to Tuscany. All that though, probably is just one-third of the entire Bistecca experience. Here is your mission, if you choose to accept it...

I wanted to take a breather in the travelogue to talk about just one element of Tuscany that I really enjoyed and to share what a Bistecca is about and what makes it special. In talking about the Bistecca Fiorentina, I am really differentiating between the real deal that you will find in Italy, specifically in the Chianti region in Tuscany and the lame meat that you find in Wolfgang Puck's version in LA. 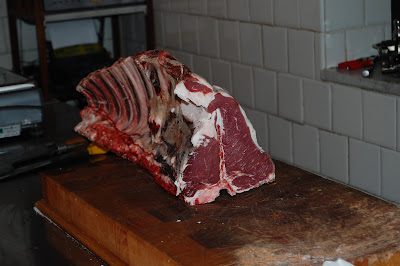 The Bistecca refers to a particular cut of meat, I guess in the US, this would be called a beefsteak but it is really a cut which is T-bone on one side and porterhouse on the other. The cut is so thick, usually about 3 inches, so as to remain uncooked on the inside when served. It is a humongous piece of meat but I think more important than what it is, is what it symbolizes and that is also at the heart of why Dario Checchini is famous. 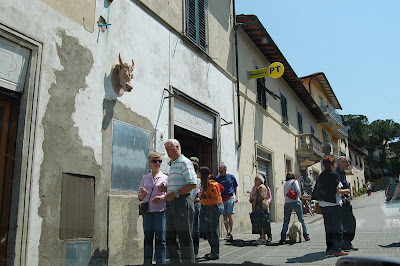 His butcher shop is a veritable vaudeville of a roman butchery. Dario himself is a large man, broad-shouldered, with a classical Italian profile, dark curly hair, and sparkling blue eyes. The shop has a marble frontage and a raised marble counter and glass case full of prepared cuts of meats and other traditionally Italian produce.

In the traditional way, a visit to the butcher can take over 30 minutes, as the butcher is usually milling in the streets, meeting and greeting the townspeople who then pack into his little space, looking into the sides of beef and pork hanging in the meat locker and sampling his laid-out spread of preserved orange peel, olives, bowls of whipped white lardo (yes, pure fat, they spread it on bread and give it out to the public, you've been warned), sea salt and olive oil. The store has an adjacent room with a constant change of shows and music blares out from the sound system, usually opera music from Figaro but sometimes rock 'n roll. 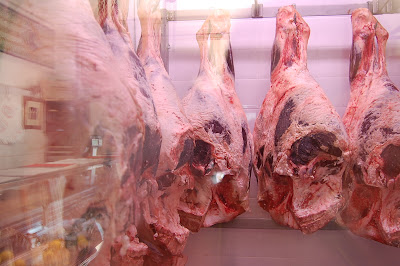 At L'Antica Macelleria Cecchini, while the mainstay business of the butchery is supplying to all the top restaurants in Italy, on weekends, the whole concept of a market town and local butchery truly comes alive. Dario holds court from a raised platform behind the counter, working with an assortment of knives and cleavers on a long block of oak, trading quips with his friends and providing the assembled crowd with a clear view of his work. 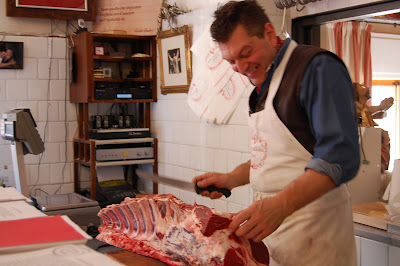 In today's world, it is actually quite difficult to find Bistecca that is reared in Italy, a lot of the meat actually comes from Spanish cows. When the mad-cow disease struck Europe, the law prohibited the bistecca from cows over 18 months old from being served on a T-bone and many people saw both the disease and the ban as heralding the end of an old Italian tradition and indeed, traditional Italian life in general. 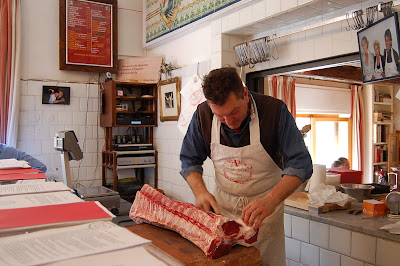 In the last few years, there has been a movement to return herding and cattle rearing to the Italian countryside and Dario and other Tuscan butchers have been at the forefront of the movement. Dario has lots of quotable quotes, one relates how butchers represent the blood, life and carnality of the countryside. "We understand about the flesh, about sin, about good food and beautiful women." 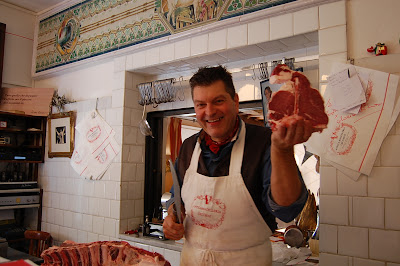 He also has lots of fans. In the corner on a marble-topped table, at the feet of the bronze sculpture of a zaftig nude peasant woman, there used to be a fax in a plastic frame that read: "Caro Dario, L'America sta diventando sempre pi un Paese di astemi vegetariani e puritani. Personalmente, continuo a preferire il vino rosso, le carni e le belle donne. Con affetto. Jack Nicholson." [Translation: "Dear Dario, America is becoming more and more a country of teetotalers, vegetarians, and puritans. Personally, I continue to prefer red wine, meat and beautiful women. With affection. Jack Nicholson."]

In fact, Cecchini is so well-known that when I carted my styrofoam box of goodies into the customs, the officer at the airport took one look at the store sticker on the box and had a mild cardiac seizure of nostalgia and national pride. "This is an important surname in these parts" he said, solemnly. When I have holiday, I go to these areas. It is the best food, this is good beef.

With that pronouncement "This is good beef", I hoped he was saying "You may take it through Customs into Singapore" and I wasn't disappointed. He made special arrangements to clear all the luggage and food we had with us and while he was on the phone, I could hear him exitedly whispering in that charmingly piercing Italian way to his colleagues that a Checchini was in the building.

Although he chucked my luggage rudely and violently on the carousel belt, he gingely lifted my styrofoam box by its twine and hand-carried it into the oversize baggage hold. Good to know that the right brand to be in Italy at the end of the day is Cecchini and not Prada.
Posted by Weylin at 5:44 PM

Enjoyed your post - went to Italy this summer for the first time and also ate at Solociccia. Too bad I was heading back to the U.S. for our summer holiday and not HK where we are during the school year, otherwise I might have also tried bringing goodies back!