Australia Day One: Perth, Zafferano at The Old Swan Brewery 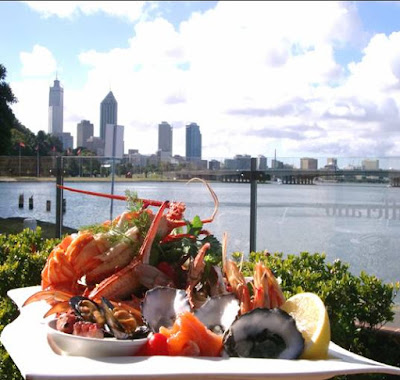 What comes to your mind when you think about Perth? If you're like most Singaporeans, you probably think it's a pretty nice place, at least, judging by the number of Singaporeans that have actually decamped to Perth. There's the old joke about Singapore buying submarines that would tow our little island to Perth, should our friendly neighbours ever launch a military attack.

Maybe you think it's a sleepy town, maybe you think of Margaret River and great vineyards. I think all that too but given the number of times I've actually gone down to Perth for work in the last two years, I've begun to develop a real appreciation for the place.

Firstly, I love that Perth has space. I love that unlike Sydney and Melbourne, you can step out in Perth and feel an outback in Australia, rather than just another city in the world. I don't know that I'd even call Perth a city, it has a city center no doubt but the pace, the lifestyle, the infrastructure...Perth is like a village, surrounded by a dessert of eucalyptus trees, mines, hills and shoals. That's what I love about it. I maybe don't love that everything closes at 5pm but I love that you have time for an outdoor life, I love the horizon of Perth and I love the smell of Perth. I love that you have to drive everywhere, something that almost forces personal space and more importantly, personal time.

The best thing about Perth and I'm not being faecetious, is the drive in from the dinky airport. It always makes me smile that such a blessed and rich natural resource environment should have this little flatted airport but what's even better is you don't really come out on a highway with bright lights and glitzy show posters but rather, you come out onto a windy road with miles of track land, with the occasional Nufarm or Coles warehouse. Heck they still have Gull petrol stations here and there isn't even a SEEK billboard in sight.

I love that you see and smell the peeling barks of the eucalyptus on the road and that the sky is so blue, so bright, bright blue and the grassy hills are green in patches, browning in patches. It makes my heart ache to remember California but I'm so glad of the memory.

Maybe Perth is a village but it's an increasingly hip one. The affluence in Perth and speed of development is obvious from the mushrooming surburban sprawl, as well as the increasingly fun to be had not just in Subiaco but right downtown. When I first started to go there, I was of the impression that the downtown area had four streets that traversed a square and one of those streets was Chinatown. While it's still a bit like that, I've discovered some cute areas for those who are willing to walk a little bit. My favourite spot in the city is the King Street Cafe, it's a gorgeous Californian-style bistro that serves a great breakfast in the morning. Honeyed thick french toast, yummy banana muffins, cuppucino and ricotta blinis are served in this high-ceilinged, old french beamed floor with great big bay windows overlooking the street. They bake their bread fresh everyday and sell it to the city's best restaurants. This is a brilliant place for a breakfast meeting or to sit and contemplate, watching the brown sueded moccasin passerbys in their sunnies and upturned polo shirt collars.

Further up the street, there's a gorgeous concept Country Road store, two floors of glass and steel fashion design chic, as well as a bunch of independant labels all along the same street. Surprisingly, the most wonderful designer sales that I've been to were in Perth. These are usually really random affairs, make-shift clothing rooms concentrated in the empty lots between buildings downtown- I've picked up some items from budding young Australian designers including a gorgeous soft long brown dress with a multi-tiered flapper skirt that had a cascading pattern of small gold sequins.

I digress. It's hard not to when talking about exciting fashion. On this trip, I flew in after an easy 4 hour flight from Singapore and was meant to meet L. for dinner. There aren't that many places open in Perth on a Sunday night and this was one of them. It's a pretty frou frou restaurant as things go and I have to say upfront that the food is blunt but hearty. It's not exactly the kind of technique and deftness that I'd expect at these prices but it's good, fresh, hearty catch from the river I guess. 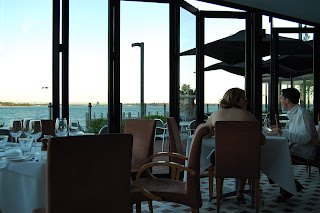 The scenary around this place is beautiful, it sits right on the edge of the river and I actually feel quite kindly toward the restaurant because I've been here many times (didn't tell Lee that though!). Many years ago, I met up with an oil and gas analyst before a week-long tour of oil and gas companies in Australia and since there was nothing to do in Perth (again after 5pm, probably on a Sunday night) and we didn't know each other from Adam, we just walked and talked while walking from our hotel toward the river. Till today, I remember what we discussed and when I think of the dynamics of the Australian resources market, I think it started there, seeping into my sub-consciousness, through osmosis with the beautifully crisp cold air, the falling dusk and the slow bends of the Swan River. After a good hour and a half, we wound up at this restaurant and decided to sit for dinner. 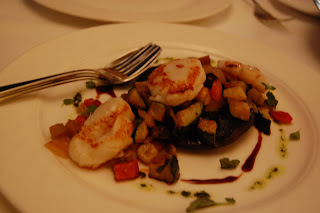 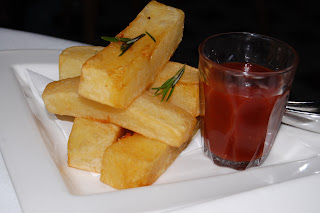 Poor Lee also had to bear with my constant photo taking over the dinner. I hadn't yet discovered all the functions on my new digital camera so I was taking multiple shots of each dish. Very distracting. Anyway, we ordered quite a few starters, the scallops with portabello mushrooms, the oysters, the chips (always the chips eh) and the tomatoes and mozzerella. The mains at this place though, are so large that one doesn't really have to order starters and while they are good, the only thing that struck me as really unique, were the way they cut the chips, about half a potato each, I should think! 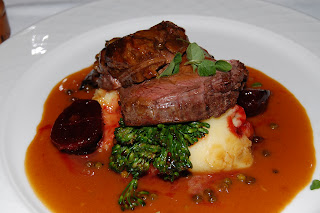 The two mains we had were the lobster platter and the fillet steak. The former was much better than the latter, especially as I felt good steak shouldn't be drowned in sauce but cooked full of its own juices. Both were very heavy, so heavy that there was no question of dessert afterward. At night, they light up the interior of the restaurant and while its a safe and romantic place to eat, I don't know that I'd call it food couture. It's the Banana Republic or maybe even the JCrew of cuisine. If you're up for a bit more travel, I actually prefer some eateries in the town center or west in Subiaco but given the shortage of good places to eat at night in Perth, this is already one of the town's best and definitely a pricey place to dine.

Zafferano at the Old Swan Brewery
173 Mounts Bay Road, CRAWLEY WA
Tel:9321 2588
Monday to Friday for lunch and dinner
Dinner on the weeknends
Posted by Weylin at 6:56 PM

Nicely written to enjoy with my Sunday morning coffee sitting in the garden in Western Sydney. Perth sounds like my kinda place. Sitting here weighing options between WA and NT and happy when I see a well written article full of positives.

Happy New Year to you.