Day 4: An afternoon in Florence, Perche No and Aqua Al 2 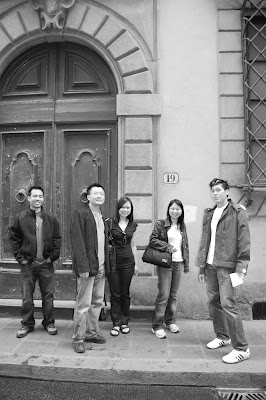 After the short 10 min drive out to the airport, we regrouped with the others, who had been waiting at the Baptistry in the city center. There were two main aims of our afternoon, one was to seek out the two gelato hotspots, recommended by our friend who had done an overseas program in Florence and another was to take a walk by the Ponte Vecchio, which C. and I had managed to miss on our last girls trip to Europe. 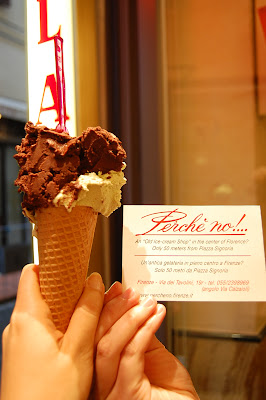 This was the Best gelato that we ate on the trip. Absolutely the best. I had the green tea and double dark chocolate flavours and they were creamy and just absolutely full-flavoured. It was gorgeous, even for a person (like me) who doesn't prefer gelato on the usual day.

The two places we were told of were Perche No! and Vivoli. For me, Vivoli was a bit tacky, the front was a very faux-Roman bistro exterior and the gelato was very thick and strong but the flavours were not as clear and clean tasting as Perche No! I had Perche No gelato two days in a row (or was that twice in a day?) and seriously, I won't have another gelato in Singapore again. Nor anywhere else in the world, till I am assured it'd be as good as Perche No. That's pretty much how good it was. Although not my favourite flavour, the gelato man said that Pistachio was the best flavour they had and my friends confirmed it was sublimely out-of-this-world. 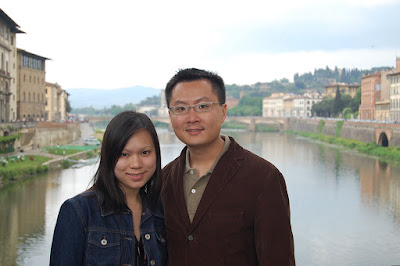 Ponte Vecchio was very pretty! Kind of like the Mary Poppins watercolour world. This is a cute picture of S. and W. in front of the actual bridge but it looks like some surrealist painting. 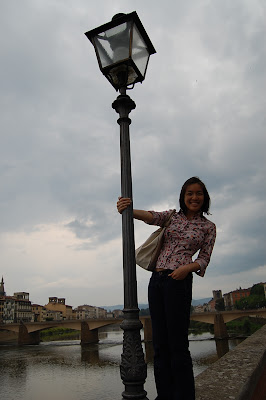 I wished that we had more time to explore Florence, I had thought that Florence and the Tuscan countryside, being not that far apart, would be entirely explorable within the same day but I was wrong. Florence is really a city that needs dedicated love and entire days given to exploring its streets, sights and food. 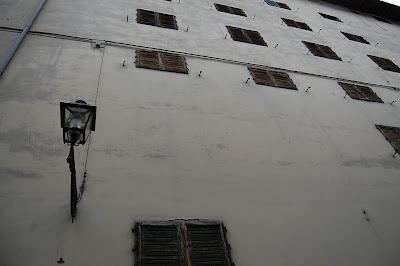 Given our heavy lunch at Trattoria Zaza and the doses of ice cream throughout the day, we were not very hungry when it came to dinnertime. We'd booked at this little place called Aqua Al 2. 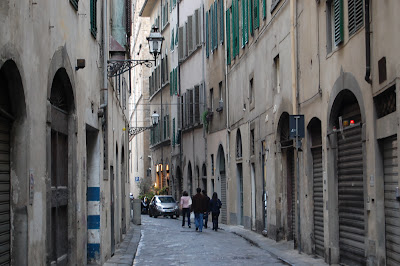 While cute, campy and clearly a nightspot for college girls, I felt that the standard of cooking was not quite up to par with the other places we had eaten at. Apparently this place is so famous that tour buses have started to pull up, full of diners but I found the whole place rather commercial and with a disconcerting number of noisy Americans and tourists. 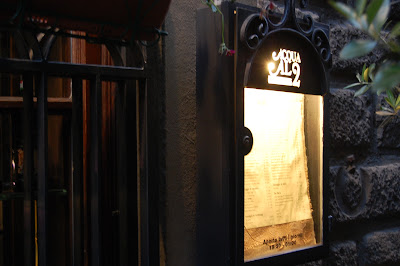 The restaurant has a little grotto space, which is decorated with plates, adorned with signatures of their regular and celebrity clientele. 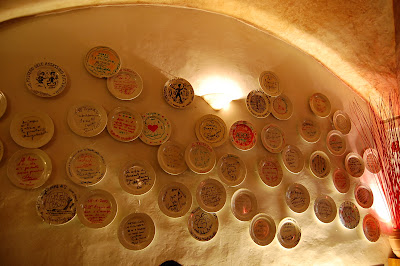 Under a barrel-vaulted ceiling and dim sconce lights, diners sit elbow to elbow at tightly packed tables to sample this innovative restaurant's assaggi (tastings) courses. The idea is for each course to come as a a trio of little plates. For our light dinner, the six of us shared two courses of salad starters, pastas, mains and desserts. This is a picture of their hummus dip that accompanies the bread. 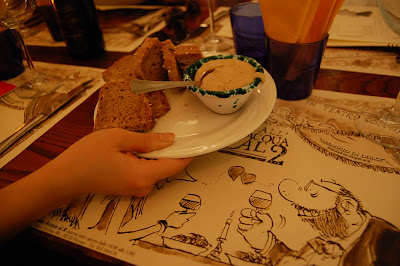 There weren't very good pictures of the pastas, as the lighting in the restaurant was very dark and personally I didn't find the pastas very good, they were quite commercial and the sauce on the pasta was rather thick. The only half decent picture was of the blueberry steak but again, the execution left a bit to be desired. The bread had dried out and the blueberry taste was stark and jarring against the meat, which had been broiled to a well-done toughness. I was pretty disappointed, this restaurant has reviews of people saying its their best meal in Italy ever and things like that but it certainly wasn't the case for us. While not exactly bad, this was a meal we could definitely have skipped. 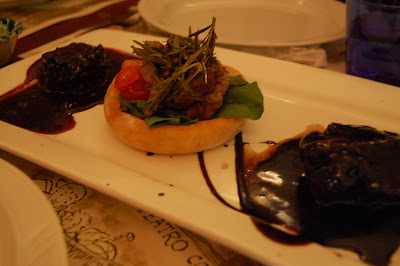 The restaurant also has a branch in San Diego.