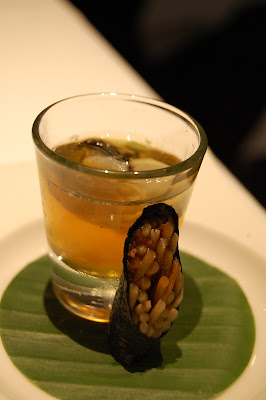 I worked straight through the next couple of days, rushing to and from meetings all through the day and hanging out at night with my laptop in my short-stay service apartment. Many room service meals, most of which were eaten tired and none of which were terribly satisfactory. Where I could, I had lunch at whatever new places I could find and which had been recommended to me, largely all within the city center to save on travelling time. I was well rewarded though, by a chance meal at Ezard, now located at the Adephi Hotel.

Teage Ezard is not Japanese. He is actually a stocky, young Australian and he apprenticed at Two Faces in South Yarra, long considered one of Australia's best restaurants. He opened Ezard in 1999 in Flinders Lane, Melbourne and in 2003 was awarded The Age's Chef of the Year. He was also consultant to JIA in HK and developing the hotel's restaurants OPIA and Y's. 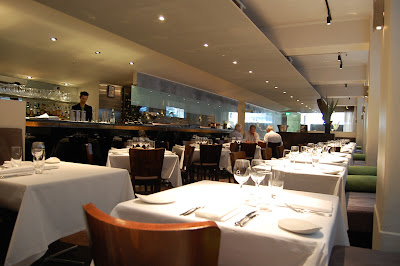 I didn't quite know what to expect, especially because I have avoided Opia, even though I've stayed at the JIA boutique hotel, as everyone said it was a not-up-to-scratch rip-off. Personally, I tend to think that describes JIA really well(please... Marimoto sheets and ship cabin wardrobes and funky pointy metal clocks are now IKEA not iconic). Also, sometimes gourmet meals really translate poorly to lunch but I was in luck as the meal was still superb.

A meal at Ezard is really limited by what you're willing to try. Some fusion restaurants are only fusion in name, in so far as they pass of what is really a chinese meal as somehow fusion "if you add mustard". There are also others where the menu sounds scary and the dishes taste downright nasty.

At Ezard, while the dish titles and ingredients are a bit imposing (Pork apple and chive dumplings with miso and blue cheese broth ($20.5) or baby snapper with yellow bean dressing, smashed green mango salad ($39.5)for example) and some dishes do run into the "wait, isn't that just chinese category" (Sichuan peppered duck with coconut rice, stir fried silkmelon green chilli, shallot and oyster sauce dressing ($42.5)) and they do serve that mandatory trinity of nori salt (here with dashi), sea salt and asian spice salt, you can't go very wrong with any of the choices. 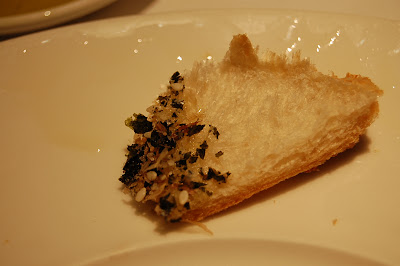 We started the meal with a Japanese oyster shooter (pictured at the start). A A$4.50 shot of incredibly complex mixtures in a glass. Essentially it was a small oyster and a bit of diced red onion, in a medium yellow, slightly thick liquid of flamed mirin and sake. The taste was quite amazing, the piscine saltiness of the oyster balanced by the honey of the mirin which the flaming process really brought out. Interspliced into those main tastes, was that of sharp onion, cilantro, all tastes that were clear, resounding and yet uncomplicated and distinct. It wasn't a contaminated taste, as many posh restaurant "shooters" tend to become - a tendency to follow a niche trend with a really mainstream taste. Also, you wouldn't trust that many places to have kept your raw exposed oyster clean.

In a mouthful, I decided that I was going to like this restaurant and that this would be a good meal. Exactly what an amuse bouche should do. 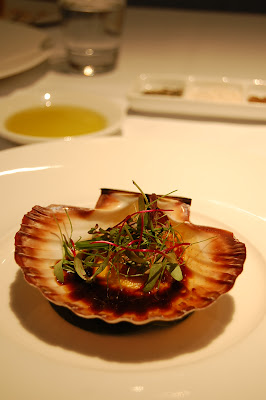 The starters were also wonderful. We had Streaky Bay Scallops with sweet corn puree, black vinegar and crispy shallots ($23.5). The scallop, pan-fried with sweet corn mustard, was dressed with the finest green tips and served with chinese vinegar wine in a seashell. What a great idea! It was an inventive take on something between a Western pan-fried scallop and a Chinese fried with garlic snow peas scallop. I loved the scallop balanced with the creamy slightly spicy paste and the clear comforting Chinese vinegar. 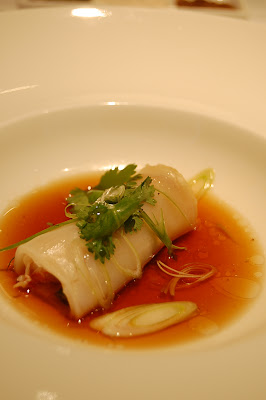 We also had a Steamed Tiger Prawn Rice Noodle Roll, Chinese Wine, Ginger Soy and Spring Onion ($22.5). This was good but it reminded me of the first sin of not-too-good fusion food; which is that it tastes plain Asian. It did though, remind me that it was occasionally nice, when you're cooking a Western dinner party, to throw in a surprisingly Chinese dish.

The starter that we didn't get to try though, was the Goat's Cheese and Marscapone Tortelli with Grilled Figs, Sticky Mustard dressing and Flower Salad ($21.5). It sounds fantastic so if anyone should be lucky enough to have tried it, please let me know how it went! 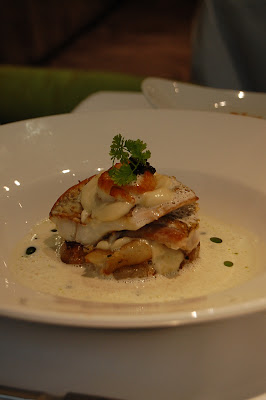 Our mains where the Pan-Fried Local Bream with Seared Scallop, Cauliflower cream, Sterling caviar, Chive oil and Jerusalem Artichokes ($40.5). I normally don't like Bream because it's a thin, somewhat hard and flaky meat but I love the idea of pairing it with a fleshy roe (ikura would appeal to me more than caviar) and creamy artichokes. 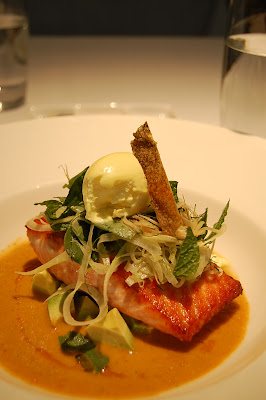 The other main was a coconut grilled ocean trout, asian gazpachi, fennel, mint and avacado salad with creme fraiche ($39.5). Probably the best trout, if not the best fish, I've eaten in a year! Although suspiciously like a salmon..... hmmm.... the trout was perfectly half cooked with an orangey smooth center, it was warm and moist and contrasted well with the shaved cucumber, mint and herbs and the smooth avocado. The ice cream-like scoop of sour minty creme fraiche was also a great touch. I must admit, I was told to get this dish by a very discerning friend and when I read the whole description, I was a bit hesistant, not liking the sound of trout and coconut but boy, it was sublime! I don't like repeating pictures but I wanted to show you how the flesh of the trout was just perfectly done. 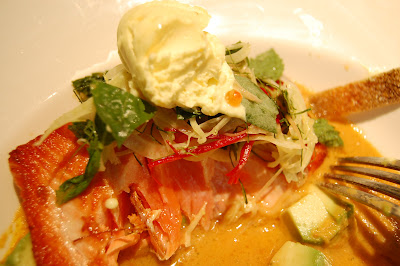 It was the shooter and main, I think, that made me decide (and I don't often do this, you can ask my brother, I own only a very selective and I think, very applicable, small number of cookbooks) to buy Teage's book. I really felt these were recipes that I would enjoy cooking and that people would enjoy eating. It's food that is creative and challenging, yet accessible and appetising. 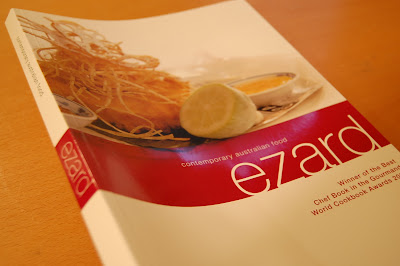 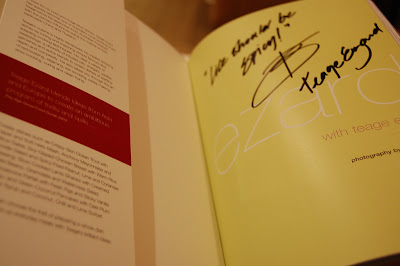 We also had a dessert tasting plate ($42.50)of his signature Apple and Green Chilli Sorbet Stack with Blackberry Jam and Apple Chips ($17.50), Swiss Chocolate Tart with Poached Pineapple and Rosemary Ice Cream ($19.50)which was a clever concoction of bitter chocolate jelly on a filo pastry base with stripes of mascarpone, rosemary-tinted cream and Smashed Meringue Salad with summer fruits and Mango Ripple Ice Cream ($19.50) which was a stacked ring of diced pavlova with chilled fruit and thin layers of sponge. Apologies for the simplistic photographs, I was in a hurry to rush to my next post-lunch meeting. 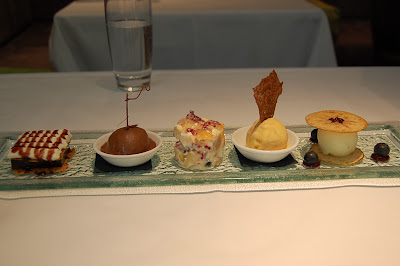 For those who have the hunger but not the budget for Ezard, Teage also has a cafe called Gingerboy that opened just in October last year at 27 Crossley Street, Melbourne 3000.