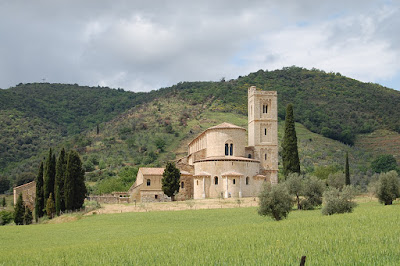 The next day was the last one that we were to spend in Tuscany. We decided to spend the day exploring the drive south of the Lucignano house, toward Montalcino where we were to visit an old abbey and some wineries and have lunch at a castle. 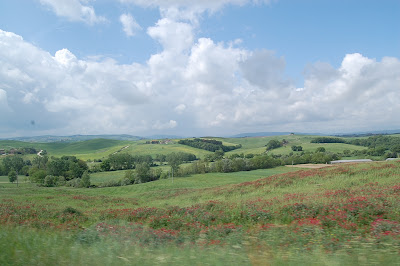 The drive south of Siena is much more well-marked and direct than north toward Florence (even and especially through some of the small Chianti roads). The landscape is characterized by stark rolling hills, marked by winding roads lined with dark cypresses and fortified towns, but among the most important features, are the numerous acres of vineyards from which some of Tuscany's most esteemed red wines are produced, the Brunello di Montalcino and Rosso di Montalcino. 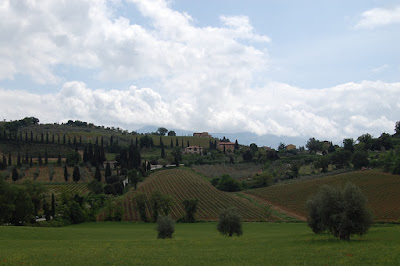 We drove directly to Sant Antimo Abbey- about 6 miles from Montalcino, it's an incredibly quaint Romanesque Abbey. Visitors from around the world come to hear the Gregorian chants which have made the abbey so famous. The legend is, Charlemagne the Holy Roman Emperor decided in the year 800, upon his return to Rome, to set up camp on the location which is now the Abbey. His soldiers were struck by the plague in the middle of the night when an angel appeared and instructed Charlemagne to make an infusion of the holy grass and some wine (Brunello?) and give it to the soldiers. 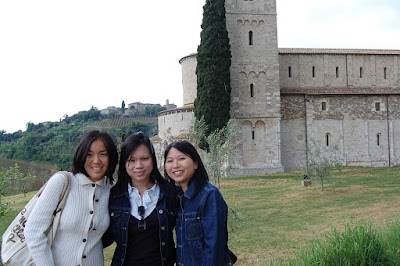 "Carlo Magno" as he is known in Italian, declared that an abbey be built right on that spot to glorify the miracle. The present abbey dates back to the 12th century as it was built on the ruins of the original 8th century building and sits in a large valley with views of the hill town Castelnuovo dell'Abate, rolling hills covered in olive groves and vineyards, and wild forests. 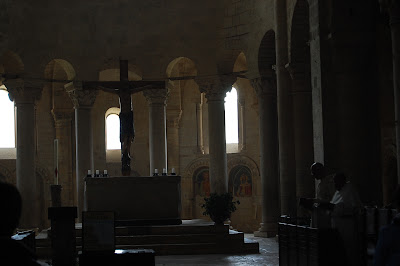 The best time to visit is during the scheduled chants of prayers, so that you can hear the gregorian chanting by the monks who live in buildings nearby. The monks start chanting exactly at the schedule time and the chanting lasts about 12 minutes. The day we were there, there was some sort of gathering of vintage car owners and all these well-heeled Italians got out and rushed with us to a spot in the abbey. 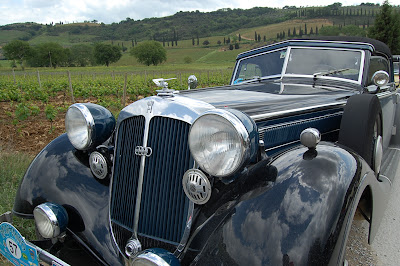 We sat and heard the monks out for all of three minutes. The gregorian chants were not really...spiralling and uplifting. It wasn't really church boys, more like... a slightly gothic, sinister muttering, the kind of orthodox Catholic churches in St. Kilda or Ireland. Luckily there was no timed or expected genuflection but in any case, we were really hungry for lunch, so we skipped outside back into the sunshine after a few minutes. 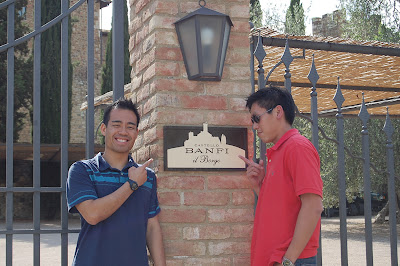 Everyone came pouring out after as well because it started to rain. We hopped back into the cars and high-tailed it to Castello Banfi. It took a long time to find the castle, so we had to pose triumphantly with the signs when we did find it (another Singaporean trait). We arrived somewhat late for the lunch booking we had, so we went straight to the dining room. 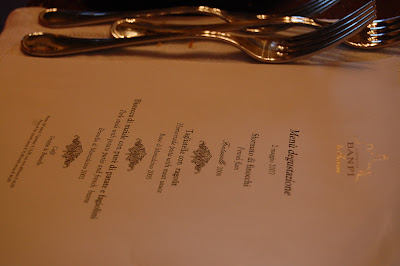 The dining room is set near the wine cellars and at the front-end of the castle. It is possible to take a full tour but we didn't wind up doing that in the end, as lunch was a slow and somewhat formal affair. This even though we were dining in the tavern or cafeteria, as opposed to the formal dining room inside the castle, which is available for dinner and at a much steeper price. 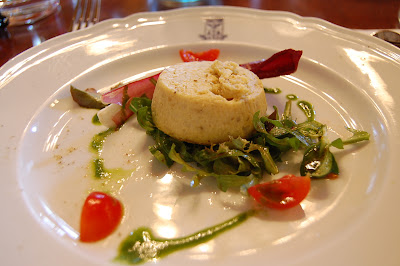 I believe we paid about 50 Euros for our lunch, which wasn't particularly cheap, given that the portions were particularly small. However, it was very satisfactory and it gave us a chance to sample the three most recognized wines of the vineyard as part of the daily degustation. The first was the Fountanelle, a buttery smooth white wine which I loved. It was rich but still sweet, vaguely reminiscent of the white wines of Les Baux de Provence (thicker and more full-bodied but less buttery and flowery sweet). This was served with an excellent fennel flan. 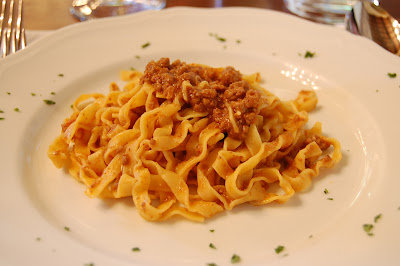 The second course we had was a simple home-made pasta with ragu. Along with the risotto from La Giostra, I would say this was the best pasta we had on the trip. The pasta itself was so incredibly flavourful, it led me to wonder if it were possible to cook pasta in broth- that's how complex the taste and texture of the pasta was. The ragu was very typically Tuscan, just a sliver coat onto the pasta, but meaty and flavourful. We ate every single strand of pasta up and could have had twice as much! The pasta was served with their own Rosso di Montalcino, which is a lighter, thinner red wine. I don't realy like it much but then it is a third the price of the mighty full-bodied, magenta red Brunello. 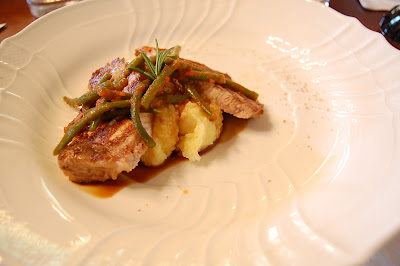 The star wine was really Castello Banfi's Brunello di Montalcino DOCG, which is the great red wine of Tuscany. Brunello is a local term referring to the grape variety sangiovese. These wines are of superior quality and limited production. Intense, concentrated and tannic, they tend to require long aging. They come onto the market usually five years after the harvest although you know, with the prices being what they are, it's entirely possible to purchse them right after the harvard year nowadays. This was served with a pork loin, a really simple and we thought, perhaps disappointing concept, but it wasn't at all. The pork was tender and succulent, made for a gorgeous and slightly lighter main dish. I totally enjoyed it and I usually shy away from pork dishes. 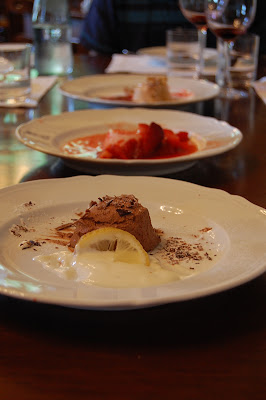 The desserts were wonderful as well. These were not included in the set but we ordered a berry dessert, a chocolate mousse and a strawberry panna cotta. The panna cotta was the stuff of dreams, light, fluffy, completely inhaleable, with unfortunately, a slightly artificial strawberry cordial dripping but other than that, the meal was faultless. 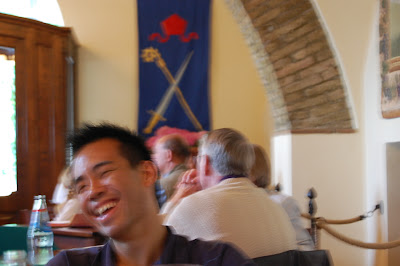 I had my reservations about spending this much on a meal, especially in the middle of the countryside. I'm so glad we did and if you are in the area, I really do recommend a winery-focused tour of Montelcino and a stop for lunch or dinner at Castello Banfi, it's quite an experience. 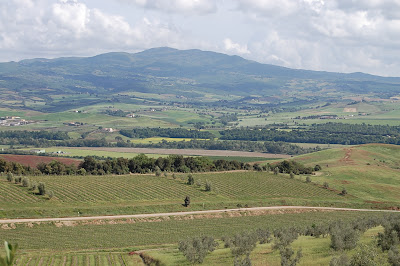 After lunch (it was tea time, before lunch was over), we stopped by the wine room to make some purchases. The Fountanelle was just 13 Euros, which I thought was a steal for such a superlative white wine. Castello Banfi was declared “International Winery of the Year” an unprecedented four times and Italy’s “Best Wine Estate” every year since 1994. 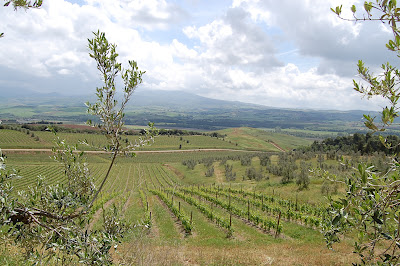 The estate really is sited in the most beautiful of areas, which is full of vineyards and olive groves. We'd finished lunch so late that we headed back north toward home and decided to have a cook-in for our last dinner at the villa. 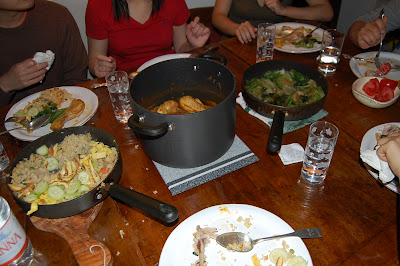 We also wanted to use up leftover rice we had in the fridge for fried rice and decided to team that with some curry chicken, using the sauces I had brought and some stir fried vegetables. 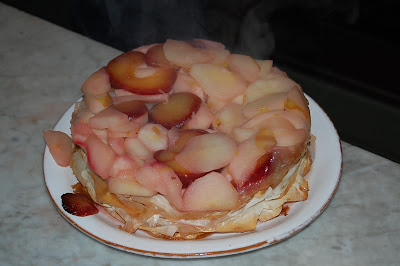 We made a filo pastry fruit turnover, with some plums, pears and leftover apples and it was really nice to sit in clean sweats and watch the photos from our trip so far before we packed up and headed to Cinq Terra the next day! 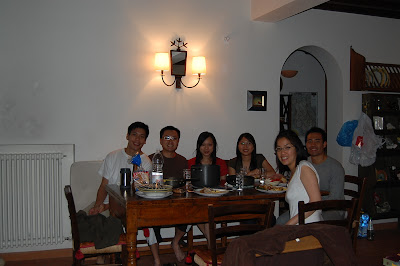