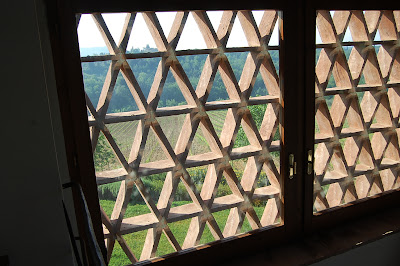 The most beautiful thing about the lovely home we found ourselves in, was surely waking up every morning to the rising sun and the rolling hills, seen from the vantage of our patio breakfast table and heady rosemary bushes in the front garden. 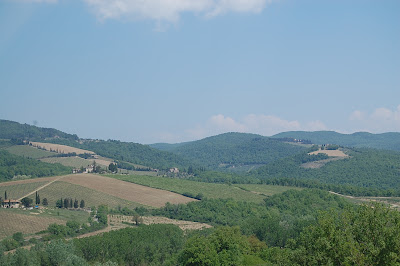 The house looked out to a vineyard and then cast out to the whole of the Chianti wine country. 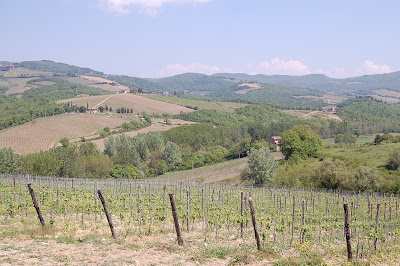 Super Tuscans! I used to love them at college and here, one was surrounded by all that was and smelt fresh, pure and hearty in Italian country life. The light came through the lattice work, through the glass on the loft and whether you woke up at 7am or 11am you felt like the day would be an adventure and the happiest one of your year. 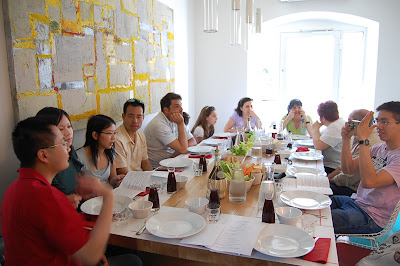 On the second day, God made the tapir. I'm kidding. Although I'm sure He did and in Tuscany too. On the second day, we woke up at almost 11am, particularly challenging as we had reservations at Dario Cecchini's Solociccia in Panzano at 1pm. Let me explain why this was important. Solociccia is only open for dinners three times a week and lunch pretty much once a week and it was an Act of God that we were there the Exact same and only day a week that lunch was available.

Let me back up just a little bit.

To prepare for Tuscany, I had done all the recommended reading. Heat, by Bill Buford, his wonderful tale of abandoning the New York lifestyle for a life as an aspiring chef and eventually an apprentice butcher in Tuscany (take that Molto Mario..). The Tuscan Year, by Elizabeth Romer, where she details (wonderful details!) the daily lifestyle and recipes in a calendar chronograph of a typical Tuscan family. While searching for the famous butcher, Dario Checchini, whom Buford had apprenticed with, I came across a review of Solociccia. 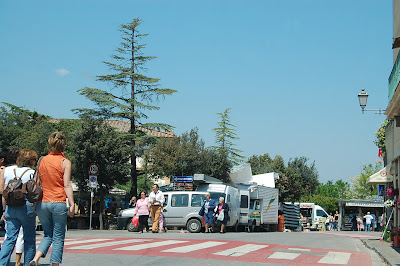 The three highlight towns of that area are Gaiole-in-Chianti, Greve-in-Chianti and Panzano-in-Chianti. In Panzano was our one chance to have a master butcher's family also cook for you and to really do justice to his range of meats. 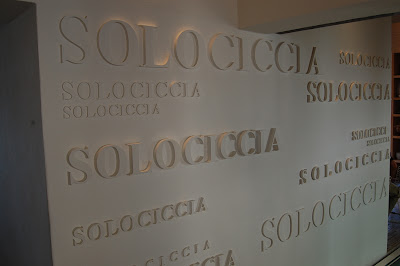 The restaurant was new and hot, oh, so hot it was white and modern (in Chianti!) and with a reservation list a mile long. Here I must thank the wonderful K. and her beau M. for helping us with the reservations, goodness knows how long I could have struggled on in my non-existant Italian without knowing head or tail of these dates, times and greetings.

To cut a long story short, after a lot of fake-ass Buon Giorno-ing and "er. una prenotazioneon. momento, momento"-ing my part, we had got seats at the communal table, to eat Il Convivio, it was going to be a feast of 6 meat dishes plus accompaniments chosen by Dario and it cost only 30 Euros a person. 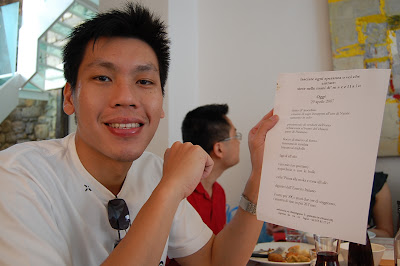 My darling friends, recognizing the gleam in my eye, understood the consequences of not making it to lunch and obediently dragged their tired bodies out of bed. Dead or alive we were going to be there and anyone who fell behind would be left behind, at least until after lunch.

By the time we arrived in Panzano, there wasn't much time for a tour of the town but we did beg the lunch ladies for 10 min grace to explore the farmers market that was goes on in the town square every Sunday, to buy some asparagus and plums for dinner. We sat down to lunch at 1pm.

This was, you must remember, the first proper meal that we had in Tuscany, having spent till after nightfall the day before making our slow way to the house. This was also the best meal that we had in the entire vacation, perhaps not least because we were so very happy to be alive, in Italy and eating. This is M. with his new (beefy) friend. 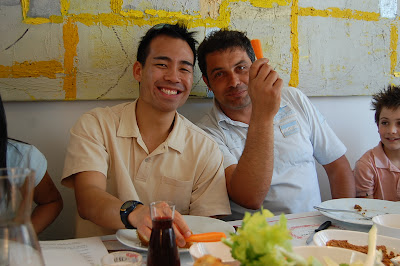 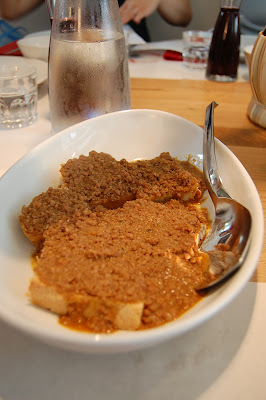 The love of meat, specifically. 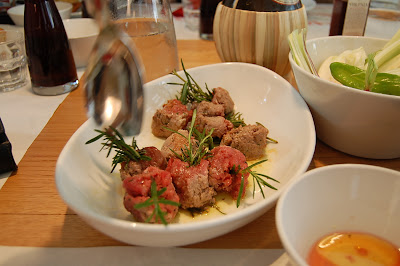 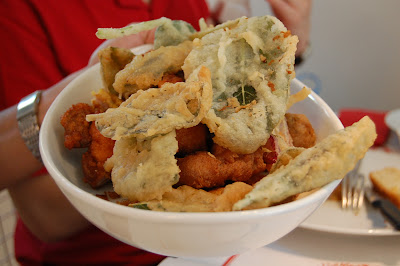 The dishes that stood out particularly were the "Florentine Eyeballs", named for the sprigs of rosemary pushed into the little balls of soft, tender and half-cooked meat and the brilliant tempura-ed fried beef that managed to be crisp on the outside, yet both juicy and solid on the inside. 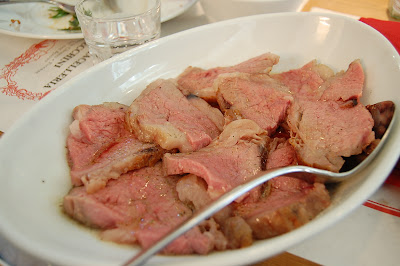 The warm roasted meat was so incredibly tender and juicy that not one of us thought to think scientifically or even enviously of how it had been prepared. 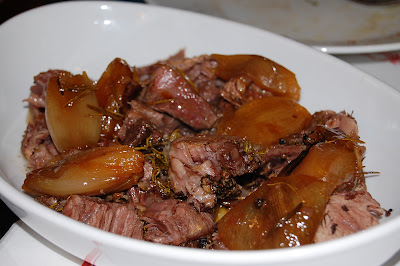 The rest of the meat was broiled with large onions until they gave up their sweetness and became fat, warm and brown and until the meat had developed crispy and juicy sides, full of good, meaty flavour and salt. 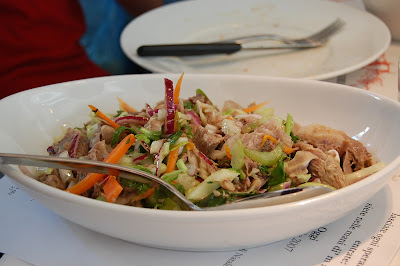 The crisp and light (comparatively) beef salad with the julienned vegetables and strips of charred grilled beef. 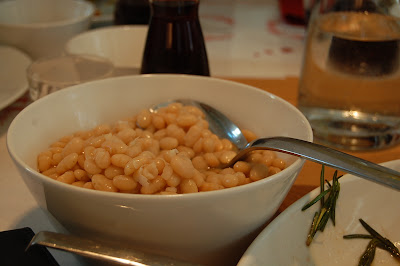 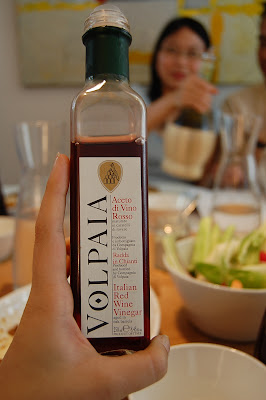 It was all filling and delightful and accompanied by white beans, balsamic and a little carafe of excellent table wine. 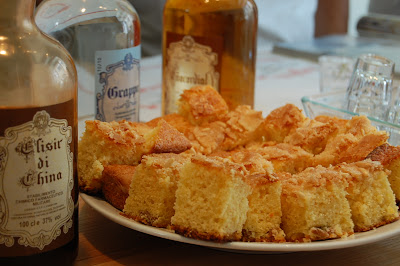 At the end of the meal, we were treated to a pine nut cake, which was a bit reminiscent of sugee cake, crumbly, moist and savoury, with a range of strong liquors. 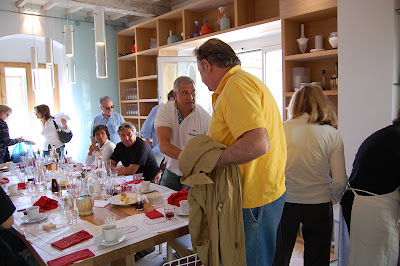 The best liquor was the chef and his happy smile as he walked around, greeting old friends and new diners. 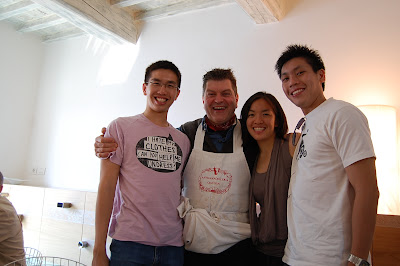 It was almost 4pm by the time we left Panzano. We'd been eating for three hours straight. Some weeks later, a few of the guys still tear up when they think of this lunch. It was the best meal of our trip. And a promise that we would be back someday.