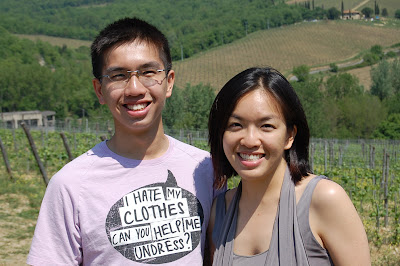 I thought hard about which photo to use as the starting picture for a great trip to Italy. I've been back almost a month now and really there were so many choices of great photos of the rolling wine hills or towering Duomo-s. At the end of the day, I thought I'd take the opportunity to thank all the readers who've been really supportive of both Colin and myself as we transition this blog through all the many changes and to clear up the questions once and for all. For all those who've asked what we're like and what we look like, here's a cute sibling photograph, taken in the heart of Tuscany.

We both write in this blog. How will you tell us apart? Well, I usually cover the Southern Hemisphere and Colin will cover the Northern Hemisphere. He will fill in on the privledged life of college wine cellars and I will fill in on the somewhat more jaded but as he tells me, convenient life of not being a student no more. If all that fails to differentiate us, he is the one with the lawyer-ish writing and I am the one with the preprosterous spelling (haha, no prizes for guessing who wrote this entry!) Please check back often for updates and feel free to leave us comments. Vote on whether we look alike!

For all those new friends, old friends and family who asked, how was the trip and when on earth are you showing your photos from the trip and how on earth did you carry meat back from Italy...We hope you enjoy the travel and food of our trip, as much as we did! The Tuscan Job series is dedicated to J. and T. for giving us a lovely home in Italy and so many good memories.

I left with a couple of friends, C. and M., from Singapore, in May and met up with Billy in Milan and S. and W. from NYC and luckily, Colin managed to join us from Oxford, UK for a few days of self-granted school holiday. We'd all been so excited about this trip and planning it for so long and the real genesis I suppose, is in the previous two Euro-trips that my group of girlfriends had taken together, once when we were 16 and another time at 18. It's been awhile!

This time, we were so fortunate to have a lovely home in Lucignano, in the Chianti region, lent to us by the lovely and beautiful J and her hubby T. We made our slow, slow way there from Milan (never drive south near a public holiday) and stopped in Parma for lunch. We were so hungry and had so far to go! After many hours of driving or rather, waiting in traffic, we were miles from our destination and were struggling with jet lag. Hunger and poor humour led us through the narrow streets of Parma, where we found parking and figured out how to use the parking meters. This is us, figuring it out. 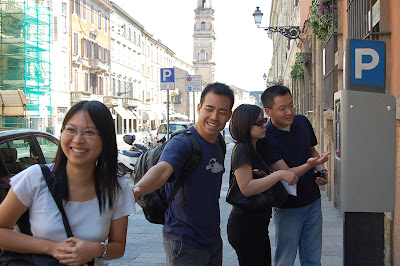 Thank God for bloggers and blackberries. We found this cute and curious little Trattoria del Tribunale and its obliging boss, who pointed us in the direction of some real true Parma Ham. I don't think we were ever so sick of Parma Ham as after this first lunch! 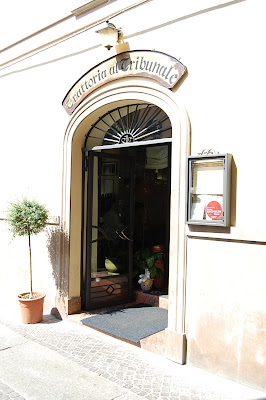 The restaurant is gratifyingly off the main touristy streets in Parma and down a little alleyway with a cunning entrance and a rustic interior. 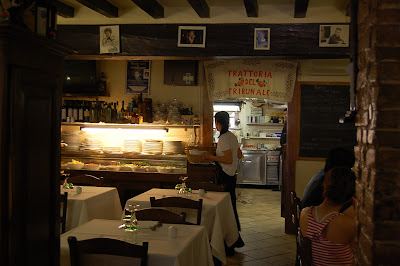 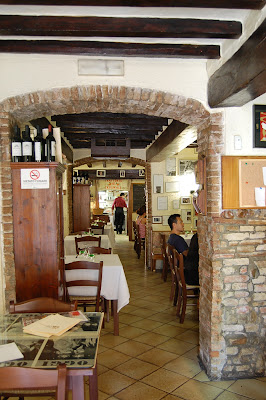 We sat at our table and started off with a plate of dry and floury bread and hill butter that was surprisingly good. Upon hearing our request for recommendations, the owner immediately went off to fetch the many plates of ham that you see here. 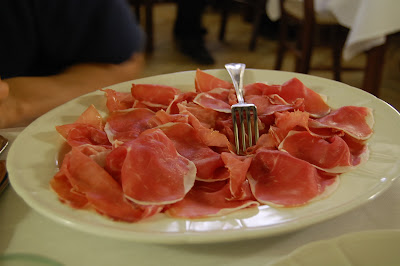 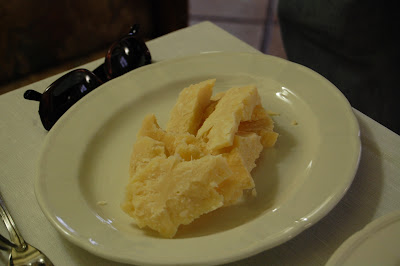 I don't know if all these plates are typically given to large groups of visitors but it seemed really too much to eat. On top of that, it seemed most Italians will have starters, some soup and some pastas and primo platti, some meats before they are even close to finishing up their meal! 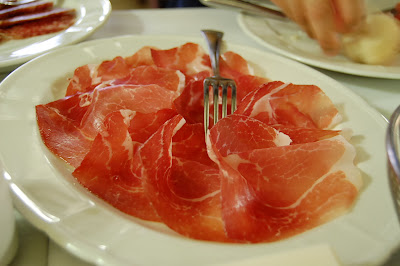 All the ham was parma ham but they were from different parts of the pig, the shoulder, the thigh, the stomach meat and that accounted for the different textures and colours of the ham. The best and most expensive meat was the brightest hue and is commonly called Culatello. They also served generous chunks of Parmigiano di Collina. The cheese was almost crunchy (salt crystals) and there was also a tiny bitter undertone on the finish. 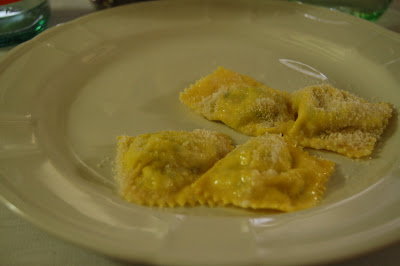 We shared two portions of pastas, that also wound up being huge, a plate of buttery cheesy fluffy dumplings, Tortelli di Erbetta, which totally knocked us out with its heavy combination of ricotta, spinach and mozzarella. 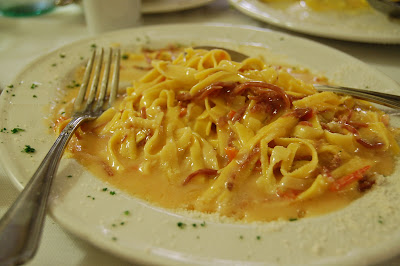 The second was a Tagliolini al Culatello, a range of salty, savory, and bright flavors that came from the ham pieces throughout the dish. It ended up a touch greasy but it was rich and flavourful. 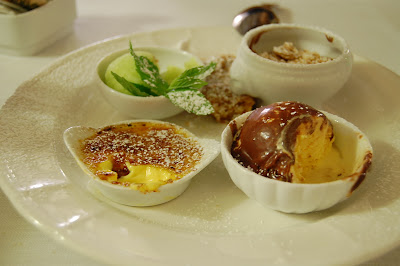 Although Completely full, we had to be Singaporean and order dessert.

Sated, we got back into the cars and headed out of Parma, having seen very little but the ham and the little town center around "the Parma ham place". 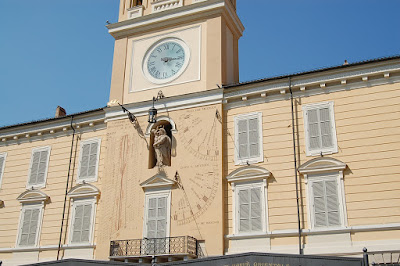 It would be a long day and night of driving until we finally passed Florence and Siena, pulled in at the right Lucignano (all I can say is, first day in Italy, double check your GPS with an accurate road map!) and dragged our sorry selves and numerous bags into the beautiful house and fell gratefully into bed. Despite all the best intentions to visit the Uffizi in Florence, we wouldn't stir until late morning the next day!