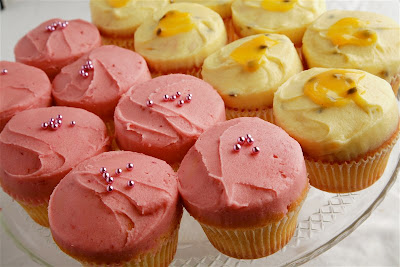 The last stop on my Australian trip was to Brisbane and the Gold Coast. I rarely get out here because there are not that many companies with headquarters sited here but I love my meetings here because the ones that do site here tend to be the most interesting and as you would expect, if their headquarter was in Monterrey as opposed to say, New York City, very individualistic and unique.

Brisbane sometimes feels like one big suburb, surrounded by a huge breadbasket and cattle ranching country, even more so than one would feel about Perth. It's laid-back, there's hardly any infrastructure to speak of (public transport infrastructure at least, which has been wanting since Brisbane became the Nevada- Carolina - Miami of Australian down-shifters and affluent retirees). Scratch Miami, there's nothing that alive and sexy about Brisbane.

The big cities in Australia are not perhaps culturally and atmospherically unique and separate to any other global city, nor at all removed from the consciousness of the modern world and regional Asia. I do though, feel that separation when I'm in Queensland or in Western Australia or most of all when in the Central Australian desert. There is something simple and resistant in these parts of Australia, something still wild, independent and refreshing. 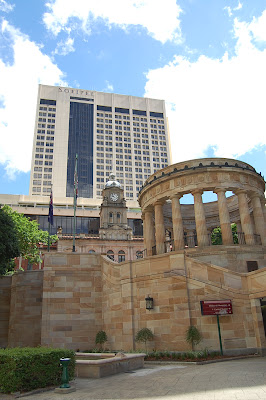 My stay in Brisbane was a time alone and more reflective than most. The big hotels in this area are all very 80s style. The sun burns hot. People live an hour and a half commute out of the city. People own farms, they don't go camping, they just go on walkabouts. For months sometimes because work doesn't necessarily have the same meaning here as in Sydney, on a crowded and commercial Pitt Street. If you don't have a car here, you will wait at least 30 min on a street corner, while the cab company tells you on the phone, that they'll send a car when they have one.

It's the kind of place where you have time to stop and think. In fact, were it not for my meeting schedule, I'd say that in this kind of place, you have a whole lot of time. Perhaps that why, in this area, people also seem to have had the time to develop really interesting businesses and home-originated services.

In my hotel room, I found a magazine, which I thought was brilliant, it catered to the well-travelled and epicurean tourist, basically profiling and showcasing Queensland businesses, districts, eateries and sights through asking questions in little exposes from entrepreneurs, politicians and chefs. These questions would be about their favourite local place to hang out, their favourite restaurant, the kind of house they would buy etc. There was also a section that focused on Brisbane's coffee craze and extolled the virtues of dedicated coffee bars (like Extract, Urban Grind, Merlo, Jamie's, Coffee Societe and the list goes on) and consuming only locally-roasted Di Bella coffee. 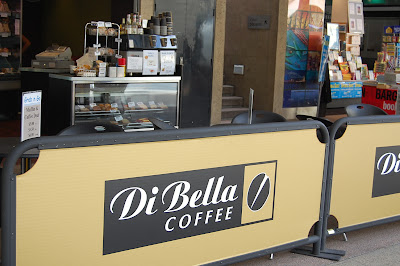 Like most of Brisbane, it was personal, thoughtful and ingenious. The dedication to farm-fresh produce and producer-sourced food was entirely apparent and seemed ingrained even into the fabric of non-artistic society.

There were two eating places that I'd love to try because they were unanimously recommended, the E'cco Bistro and a restaurant called (I think) Ibis. Unfortunately, over the time that I was in Brisbane, I had corporate dinners with my companies and wasn't able to make it to either. It was only after all my work and before my flight home that I had a bit of time to explore the city but I was determined to make the most of it.

I walked from Anzac Square, stopping for some breakfast muesli, small fashion label boutiques and furniture stores, all the way up to Fortitude Valley, in search of this place which at least five people in the magazine has said made the best cakes in Australia. 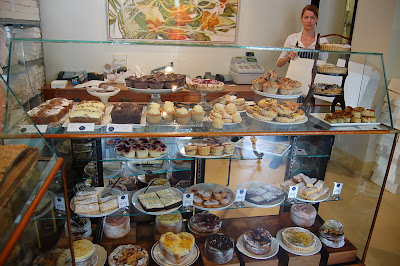 This is Jocelyn's Provisions, run by famous Queensland entrepreneur Jocelyn Hancock. She also bakes a range of beautiful biscuits and sells other items such as Kirk's Cultured Butter, Yea Clotted Cream and even Badoit mineral water at her store on the corner of James and Doggett Street in Fortitude Valley, Brisbane. 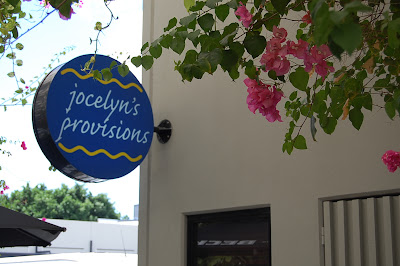 I admit when I first saw the homely store, I was a bit disappointed (having walked for over an hour by this time) but when I tasted the goods, I realized what an absolute talent Jocelyn is. She is a consummate pro and if you are anywhere near her store, you are in for a big treat. What I love most about her produce is its straightforward taste, freshness and consistency. She also uses seasonal Australian fruit and sources from small experts in preserves, fruit ranges and tablelands all over Australia. Check out her gorgeous website for more mouth-watering photos. 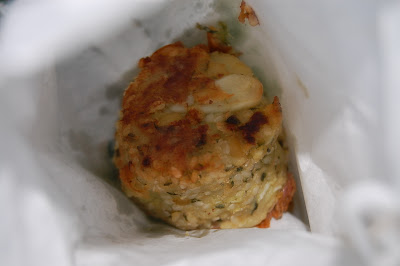 I bought the chickpea and feta frittata, a raspberry patty cake and a small bag of melting moments. The frittata was solid but not heavy and the patty cake was moist and lemony, with an icing that had a perfect balance of icing sugar and sour cream. 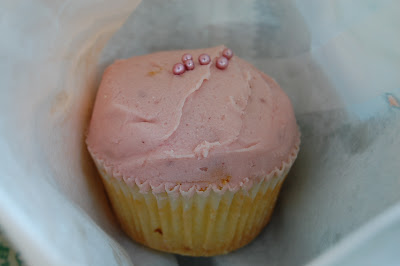 The melting moment biscuit crusted away in your mouth, breaking apart effortlessly to reveal a quick sharp tinge of sweetness from the raspberry puree and a smooth creamier sweetness from the thick but soft icing. They were all excellent. They were the kind of delicious that one can say without reservation, without exclusion and without compromise. Do you know how hard it is to find foods and worse, cakes, that you can say that about? 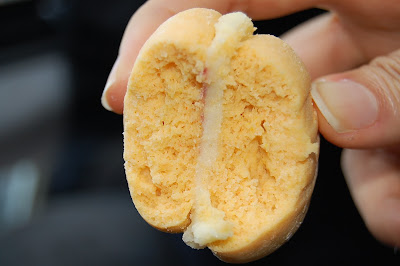 I do. This was one magic if melting moment. And when it was done, I felt very sad because I could not get these often, if ever, going forward. I was sorry to have such a taste, only to have to let it go. I saved up some of the melting moments and the patty cake for a car snack, which was wolfed down on the way to the airport, to console myself.

It's always these times, no? Tired, having had to deal with the worst personalities, jet lagged, slumped amongst luggage into the back of a car, with a long ride to the airport and an even longer ride in the air BUT eating the best melting moment this side of the equator. That's when I think, heck sure I work hard but there are perks!