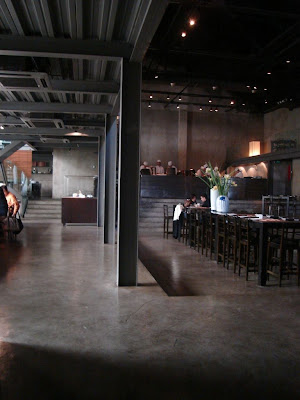 I wanted to treat my cousin A. and C. for their wonderful hospitality. I had such a great time over the weekend, trotting around the freezing Shanghai cold and they were so patient with my frequent stops into shops and cafes. C. and I had such fun shopping, tailoring, eating, getting massages, it was a fantastic girl vacation and A. had to put up with all that!

We had also eaten some wonderful food, a lot of which I didn't really get a chance to photograph because it was too formal an occasion (that happens a lot even in Singapore, I envy the people who can blog constatntly, I think my hit rate of blogging restuarant meals I eat is about 30%).

Luckily, over the first part of the weekend, it was still just the three of us and I asked them to pick a restaurant from a frou-frou list that I could buy them a meal at. Upon seeing the description of "interior that looks like a scene from Blade Runner", A. immediately jabbed the paper and said, "I want to go to Shintori Null 2" in a faux kung-fu accent.

Accordingly, we caught a cab to Puxi and to Julu Lu. In the twenties and thirties, before the rise of Communism, Julu Road was known as Rue Bâtard—an address highly sought after for its stone row houses and its gardens, which you can still glimpse near the corner of Hanshan Road.

The strip fell into disrepair as Shanghai slumped through the eighties; until just a year ago, it was best known for the beer-soaked girlie bars—which are finally being pushed out, one by one. Restaurateurs, besotted with the magnificent buildings, are now luring architects, creative media types, and an increasingly diverse group of foreigners to this burgeoning restaurant row, which has helped spark Julu's second golden age. 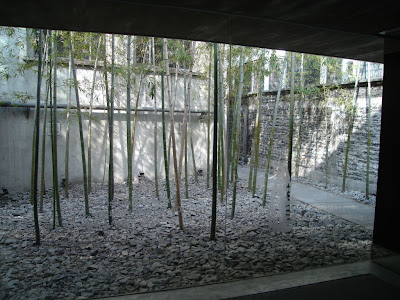 The taxi found No. 803 but it was just a gap in a whitewashed wall. Confused, we stepped in and around the hole and found ourselves in a bamboo courtyard. We were immediately impressed and followed the gravel path up to a giant wooden and steel door. Uh-oh, we thought, perhaps it's closed.

As we stood outside it though, the door slid open seamlessly and silently to reveal a black interior with soaring high ceilings, dramatic glass and light dumbwaiters and high sushi chef tables with gorgeous modernist flower arrangements. It was a sight to behold, especially in Shanghai. The concept of the place and the artistry, right down to the arching single orchid flower display and the grated steel mezzanine, entirely transported you to a new and visionable future for the Chinese state. 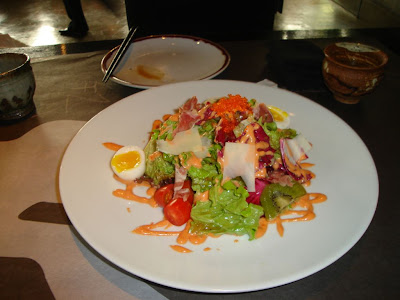 We had a Pyo tei salad (75RMB) which is a roe and mentaiko salad, paired with a clever ranch-like dressing. Although the colours were very bright, the salad was crisp and refreshing. We also had the Nigiri Sushi, which you can order from the sushi table or have the chef make a mix set.

We had the Peking duck roll, which was a Vietnamese-inspired roll (70RMB), I had been looking forward to this as it was one of the recommended dishes but while the rolls themself were alright, the accompanying meat was a bit hard. 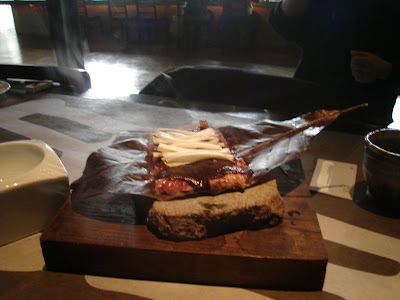 The two best things we had and which I would definitely recommend, are the beef steak on pu (bamboo) leaf (150RMB), which is a really picturesque dish. The beef comes wrapped in a bamboo leaf, which is then grilled over a stone fire. The smell from the crackling leaf and the cooking beef is fantastic and the resulting meat is soft and tender.

The last thing we had was the Shintori stone pot rice. This is their signature cod mixed with rice and cooked in a stone bowl (RM100) with a little Japanese fish sauce. It was very yummy and the steaming rice on a cold day was just a comforting end to the meal.

We shared the green tea tiramisu (RMB45) for dessert- I liked that it was very light but I didn't like the watermelon accompaniment at all, that was extremely cheap, from both a Chinese and a Japanese point of view. 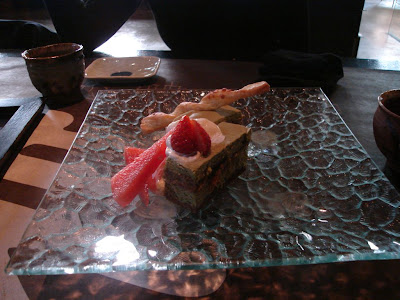 Given the prices, this is not exactly the kind of place you'll find the glorious underbelly of Shanghai society at. That being said, the prices were not that bad, lunch for all three of us came up to about RMB600, which is Singapore dollar terms (yes, I know, you don't expect to pay Singapore prices when in Shanghai but then you don't expect to find Shintori Null 2 standards in Shanghai too!) really wasn't that bad for three people, given the kind of food we'd been eating.

If you make the visit (and I hope you do), you should definitely make time to visit Spin. Right round the corner from Shintori, it sells the same Japanese-inspired earthenware that gives Shintori Null 2's table settings such a distinctive minimalist style. Spin's range of ceramics are designed in Shanghai but created in JingDeZhen, China’s ceramics capital and the potters utilize new techniques, with old style Japanese glazes.

The pieces are unique, simple and beautiful. I bought my colleague these two slightly Cubic,canted off-center mugs and saucers. I bought some distinctive red and dark green glaze bowls for Japanese soup and two pale blue large cereal bowls from the new series "Fold", which basically features crockery with a distinctive crumpled fold running through the clay.

The best deals are on the teapots, these make such great gifts and they are not that expensive. The designs range from the whimsical, to the dramatic and from fat squat little wifely teapots, to graceful curving long spouts and thin stems. Each comes in it's own pinewood stamped box, lined with silk. While there, we got to meet some of the artisans and they were just charming with their dedication to their craft and meticulousness in designwork.

Clever, creative, even witty. This was the very developed side of Shanghai that I saw today and this was definitely in-line with the growing bourgeious and what's-up guides to the city. Check out Kitschy Shopping, Reader's Choice Nightlife and Mad About Shanghai's blog for more tips on where to go and what to see.