Australia Day 7: Melbourne, Pure South and The Deck at Southbank 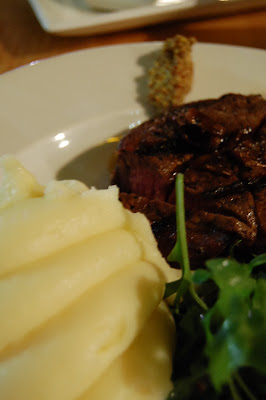 I was extremely happy that the weekend had rolled around as that meant I would get to take some time off before returning to work on Sunday evening. It's rare that I get to spend the weekend in one place, without travelling and I intended to make the most of it.

By the time I had finished my meetings on Friday, it was time for dinner. Luckily, as I was in Melbourne, there were ample restaurants for dinner and many districts that we could pick to go to dinner. As much as I enjoy Carlton and Toorak, it's unrealistic to think I can eat or even hang out there all the time. Most of my eating is in fact contained to the city area and I'm usually so tired that even St Kilda, with its numerous restaurants and bars just a straight tram ride down from the city, is out of the question.

One area that is a huge attraction for the corporate and tourist types alike, is the Southbank area. I've always thought that this was beacuse it was near the river and next to the Crown Casino complex. It's also a sort of promenande area where people can walk, show off and sit around in open-air eateries.

My personal experience with Southbank started on one visit a long time ago, when dinner plans for St Kilda were scrapped because of the lateness of the hour and the intermittant rain. My travelling companion and I shivered our ways down over the bridge to Southbank and through the hotel's concierge, fluked a reservation at what has become one of my favourite restaurants to return to. 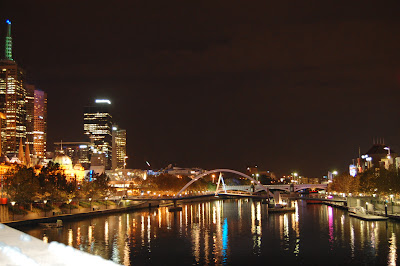 Both the restaurants I've listed here are right on the same river-side building at Southbank, Pure South on the ground level and The Deck on the mezzanine level. I didn't eat at both at the same time obviously but since they can be found together I thought I might as well post the pictures at the same time. Additionally because they are primarily meat restaurants, it provides a good comparison.

Australia has some of the sweetest lamb in the world. That's more a statement of fact. I am still partial to US or Japanese Kobe beef and the reality is most of Australian Wagyu isn't above 10 on the marble score (not that it isn't still great). The benefit of having aspiring Wagyu farms though, is that it raises the standard of the usual beef - the beef with marble scores of under 6 are released for supermarket sale, which is a wonderful thing for the consumer. I'm not a huge fan or consumer of red meat but when I'm in Australia, I like to order the beef or lamb on the menu because I really think the quality of their home-grown meat is singular. You know you're going to have a good experience when looking at a knife like this one! 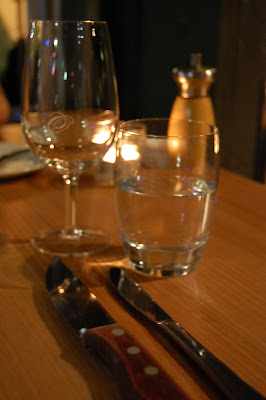 Pure South remains one of my favourite restaurants in Melbourne, although that may change as I've been told there are far better steak restaurants. What I appreciate about Pure South is that they have set up direct trade with farmers in the Islands of King, Flinders and Tasmania, firstly to ensure natural produce and secondly, to vouch for the premium of identifiable sourcing, down to the individual farmer and cow. It's really the direction that I see gourmet and single-origin food taking. 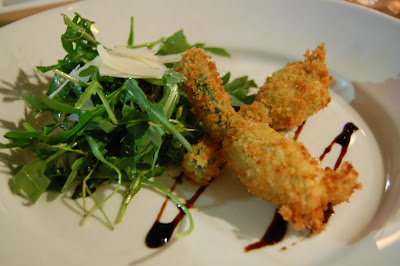 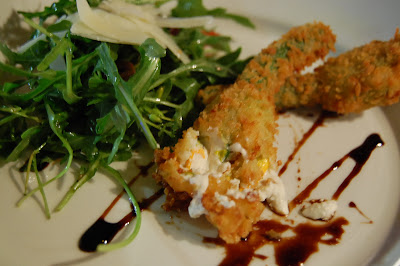 I was joined for dinner by my cousin Z. who lives in Melbourne and had sweetly offered to forego his usual plans and study to have a leisurely dinner. For starters, we tried the Highland goat's cheese stuffed Zucchini Flower ($17.90) and the Baby Calamari filled with Lobster, Whitefish and Tarragon mousse ($18.50). Here are the starters, broken open to show its cheese filling.

While both of them were excellent, I must say they were a bit light for a full appetizer price. Which is really one of my gripes about Australia, it's so unlike Asia in that going out to eat is a huge expense and a huge effort on top of that (to get the time off work, find a babysitter, commute into the city etc). I cannot really see that diners can enjoy appetizers when each small dish is so costly. 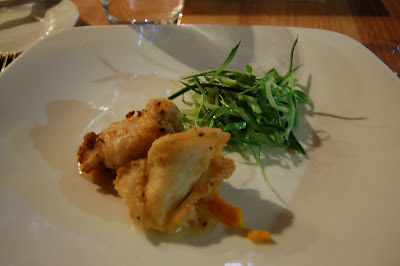 While there are other specialities at Pure South, like the Roast Bluff Point pork belly, Pelican Island Pacific Oysters, Spring Bay Jumbo Tasmanian black mussels and Flinders Island roast lamb, we decided to go with the Pure South Beef, which is all grass-fed for 24-36 months and then dry aged for 21-28 days.

(Dry aging basically relaxes the muscles in the meat and solidifies the fat particles which upon cooking, are then reactivated and melt better into the meat, creating a softer, more tender texture. Now you know.) 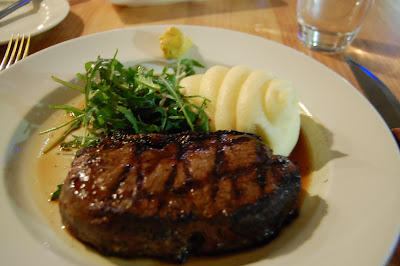 We had the Cape Grim Black Angus Scoth Fillet (300g for $38.90) and the King Island Hereford Porterhouse (300g for $34.90) with madeira and mushroom sauce. All the steaks are served char grilled and served with King Island double cream mash, wild rocket, radish and truffle dressed salad. 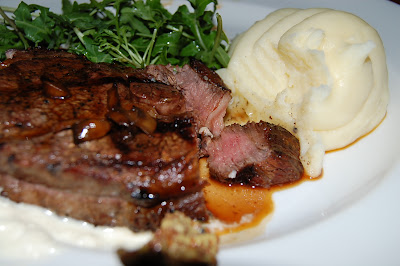 What can I say? The steak melts in your mouth, it's dry yet moist, it's
tender yet flavourful. It'll make up for the last ten mediocre steaks you
shouldn't have eaten. It's not a cheap meal but it leaves you feeling sated. It's a meal made better with good company but good enough to make up for poor company as well. Notice how I have often mentioned that steak floating in sauce is never a good sign. In this restaurant, steaks are always served dry, with the sauce as an accompaniment and you can see that even without the sauce, the inside of the steak is juicy and cooked to a succulent pink perfection.

I should also give especial credit to their bread. Having been back for this long, I sometimes go into sourdough withdrawal. There is no real good sourdough in Singapore (they make some shitty sour stuff at sandwich restaurants but that's not really Sourdough) and in any case, there wouldn't be anything like true blue American sourdough. The bread here comes close and has a wonderful crusty, tasty rind that is super flavourful even as it stops short of being savoury. I'd go to South Bank just for the bread alone and every time I'm there, I endure the haughty waiters looks to get extra pieces and eat it neat with butter till I'm satisfied. 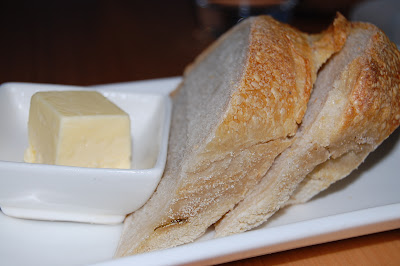 I've never had the stamina to try their desserts which all sound pretty normal but I do wish I had been able to try their King Island dairy cheese, especially the Triple (! Yeah arteries!) Brie with washed rind, sun dried muscatels and truffled honey ($19.50 for three cheeses). 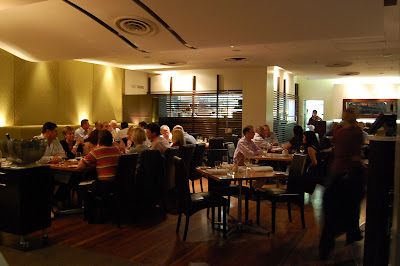 The decor of this place is very presentable, it has indoor seating capacity, where I love the lighting and hardwood floors and an equally-sized outdoor area with tables under canopies and in winter, heating lamps. As with the rest of Southbank, it's the view; a full panorama of the riverfront, that really complements the straightforward, whole-hearted, precise cooking and food. 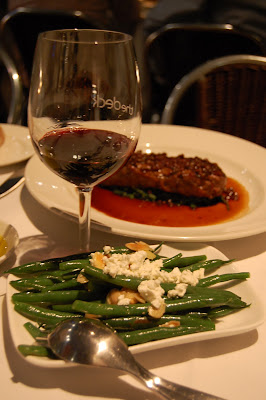 The other restaurant on the mezzanine level is called The Deck. Unlike Pure South, The Deck is probably a bit more corporate and doesn't take its meat quite as seriously. 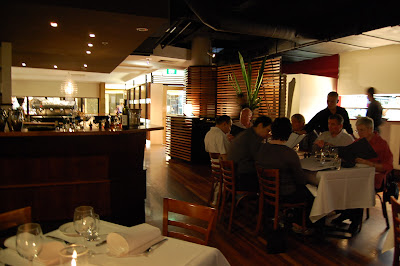 This dinner was a bit of a disappointment but I didn't much mind, given that I only stopped in for an appetizer (was too full for any other kind of dinner) and I had the great company of the delightful Brazilian boys. Like the restaurants below, the Deck has both an indoor space, as well as outdoor (this time balcony) seating. 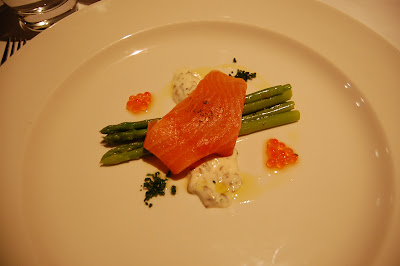 We started with a really measly asparagus with salmon and brioche taster, an argula salad, which was a tad bitter and platters of oysters. 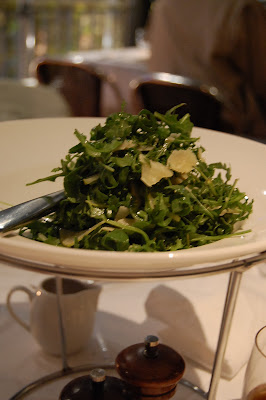 This was the corn soup and you can see from the texture that it really had grits of corn in it, with some strange topping resembling fried shallots. Edible but not that appetizing. 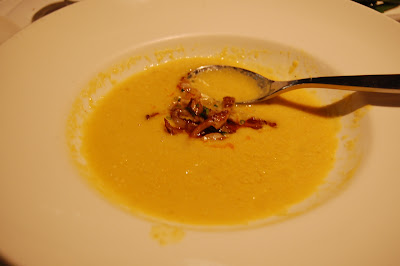 This was the meat, which remember as I said before, I really disapprove of meat swimming in sauce because if really well cooked, it should not need copious amount of sauce? The consistency was also missing as different diners reported that their meat was ok to very hard. 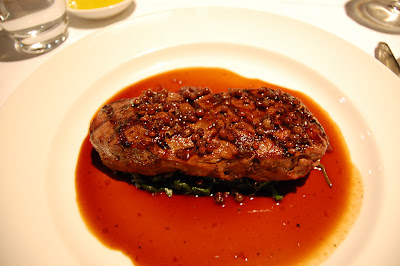 The desert was an apple tartin of sorts but the pastry it was sitting on had been charred at the bottom so it tasted fairly bitter and very dry, even with the ice cream and sliced apple. Not a very pleasant experience. Possibly the restaurant was just very busy, given this was a weekend night in a town hosting the F1 series, or perhaps the table was very picky, since most of them got off a plane and went straight to Vue De Monde for lunch earlier the same day. 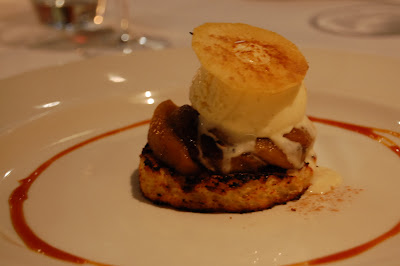 I would post the address and details and presumably (hopefully!) this restaurant is a lot cheaper than the others in the building, but if you're already in Southbank, I think there are better places you could eat at.