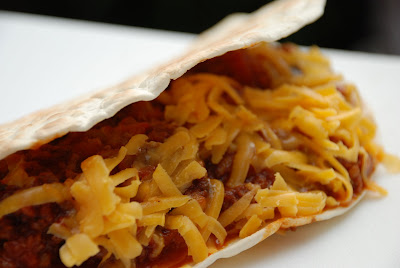 There are a few things I don't eat...this is a great subject for food bloggers. It's sort of the anti-Christ of Anthony Bourdain isn't it, what foods will you not eat for love or money?

For me, that list runs to believe or not, mint (yes, it took me years to switch to Colgate from my beloved non-minty Orange Lion toothpaste), capsicum and ang ku kueh (a Chinese dessert with peanut stuffing in a bright red glutinous steamed dough cake).

Actually, I am terrible with Chinese desserts in general, given my dislike for the texture of gooey paste. This is quite embarassing in Singapore, as the end of a Chinese banquet meal finds me ackwardly prodding the dessert round and round with a spoon, smiling brightly while pretending that its disappating.

That category obviously includes or-nee (a yam paste), yellow/red/green/mung bean soup/paste/buns. I also don't like almond essence/jelly/soup (though I like the real thing and almond cake) and while I like strawberries as a fruit, I don't like the ice cream. I would put this down to a dislike for artificial flavouring but the reality is I'm a huge fan of those multi-coloured bubblegum Paddlepop ice creams!

Mexican food, then, is probably my least favourite cuisine and Chili, which is a very American invention, was also something that, despite my years in the US, I avoided. After a recent trip back though, I started to think about Chili as served at a football game in the cold and somehow thought, well, perhaps it's not that bad and perhaps the recipe can be made to more Asian tastes.

I had my reservations about the recipe I found online, not because of the shortage of reviews (there were about 500 reviews but all from alumni of a university recipe) but because some reviews said it tasted like it all came out of a can, so I made some changes, largely to make it less spicy (I took out the jalepeno peppers), quartered the quantity of beans and to make it taste fresher (I increased the amount of sausage and vegetables, took out the beef bouillon cubes, changed the dried herbs to fresh herbs, increased the amount of Worcestershire sauce and changed half the cheddar cheese to Parmesan Reggiano, amongst other things). 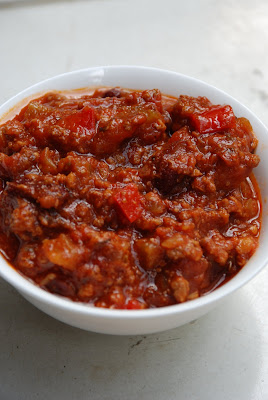 
DIRECTIONS
(1) Heat a large stock pot over medium-high heat.
(2) Fry up the bacon to release the pork fat, saute half the garlic and onions with herbs and all the vegetables
(3) Crumble the ground chuck and sausage into the hot pan, and cook until evenly browned. Drain off excess grease.
(4) Pour in the beans, tomatoes and tomato paste. Add chile peppers and beer. Season with chili powder, Worcestershire sauce, garlic, oregano, cumin, hot pepper sauce, basil, salt, pepper, cayenne, paprika, and sugar.
(5) Stir to blend, then cover and simmer over low heat for at least 2 hours, stirring occasionally.
(6) After 2 hours, taste, and adjust salt, pepper, and chili powder if necessary. The longer the chili simmers, the better it will taste. Remove from heat and serve, or refrigerate, and serve the next day.
(7) Serve hot, ladled into bowls or pan toasted tortilla wraps, and top with shredded Cheddar and Parmesan Reggiano cheese.

If given my own way, I would have changed the garnish to coriander (heavenly!) and served it with Thai rice crackers instead of tortilla wraps or nachos.

Shopping for ingredients also proved quite a challenge. For example, what exactly are chili beans? For those who don't know, they are pinto, kidney, navy or great nothern beans, never white beans or black-eyed peas. In Singapore, we are a bit short for choice, we have exactly one brand of canned kidney beans, then basically an entire shelf of baked beans (calcium, salsa, cheese and ayam, which is chicken, varieties), a weird Greek giant bean and white beans (which for some reason, are shelved with Progressive soups and not in the canned beans section at all).

If you are shopping in an expat supermarket, then you may also have a choice of Pinto beans, though if you are looking for beans that hold their shape better, I would suggest the harder kidney bean and not the more jelly-bean like pinto.

In fact, there is a big debate about whether chili should have beans at all. There is this website called the Great Chili Project which states that "beans are the biggest controversy in chili cookery" and quotes a book on just the subject of With or Without Beans as concluding that "an assay of all material accumulated indicates a preference for with beans."

That was in 1952. In 1981, when Bill Bridges wrote on chili, he cited Ray Shockley of Wolf Brand Chili as the source for the following statement: "In Texas, the preference for straight chili runs about three to one, while almost everywhere else in the country, chili with beans is preferred by the same majority." It turns out that pinto beans are the most popular in chili, if you add them at all (although I stand by kidney as much less mushy).

There are some pretty good reasons for cooking "straight" chili. The most basic reason is that once beans are in the chili, they cannot be removed. Also the popular belief is that chili made with beans can't be reheated, since the beans get sour and turn to mush and truly chili must be reheated to reach its final patina of perfection.

Other lesser reasons are the hemicullulose of the bean cell wall and the indigestability (read: flatulence) of the combination of the two non-absorbable carbohydrates of beer and bean. Note- bean chili Can be reheated, as I discovered this past weekend. 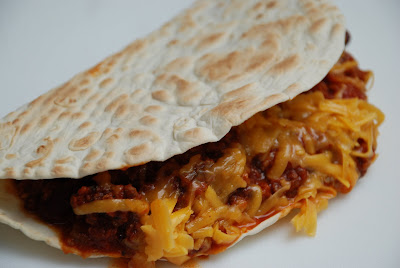 In any case, I suspect chili is so popular in the US because it's super easy to make (basically its like a stew with beef chuck), can be stored for days and weeks if frozen and when served piping hot, it can be very comforting. I liked this version, it has a good hot kick in the finish from the tobasco, though you have to re-add some if you keep it overnight as it gets absorbed.

The chili here is slightly watery and the reason is that after pan-heating the flour tortilla wraps, you want to put the chili on the pan, to let it sizzle, heat up and dry out which will also help the cheese melt onto the meat.

The recipe is very versatile, in its runniest form, it can actually be served over pasta. For our family dinner, I used it as a coffeetable dip with guacamole and nachos and my cousins unanimously loved it and wanted to have it again. You can also make a healthier and incredibly yummy version by saute-ing fat-cut chunks of mushroom and thyme and mixing those in with a half proportion of chili for the tortilla wrap stuffing.
Posted by Weylin at 11:53 AM