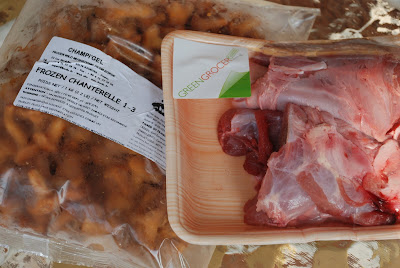 Before you accuse me of any bias, I am going to state upfront that I was given a number of vouchers to spend on the online grocery service, www.greengrocer.com.sg to test out their website. I wasn't obligated to write anything about it, outside of feedback to the organization.

Here goes...When I lived in New York, Freshdirect had just started service in Manhatten. Though sorely tempted, I never actually used their service because I lived in Soho, which was dead near restaurants and small grocers (and two steps away from Dean and Deluca, though I never did much shopping there) and because it was summer (ie. it wasn't so cold for a winter wimp like me to walk to the stores).

In the years since I've left though, the service has gone from strength to strength and I frequently hear my friends mention it now, as quite a regular part of their lives.

It stands to reason that as a society and city develops, door-to-door grocery delivery will become more popular especially among young couples who are short time. I myself quite like browsing in a supermarket, in fact, it gives me a great sense of joy and security to be amongst so much food (a fact that never fails to amuse less domesticated friends) but even so, it Is quite a luxury to have groceries delivered to you.

You come home and the meat, the pasta and the sugar peas are waiting for you and to be cooked straight in the pan for dinner. Although perhaps a trivial luxury and I guess for those who can afford it, I did think it was quite a treat, sort of one step down from having a meal cooked for you. 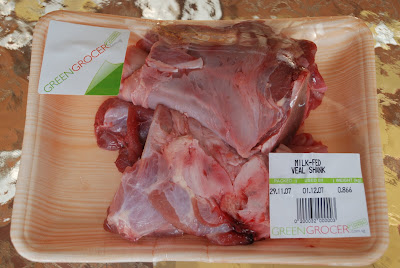 Ordering On The Website
In any case, I hope you guys do go take a browse through Greencgrocer. It's quite comprehensive but there are in particular, three things to note. One, the site does not sell duck. I was looking for it because it's one of my favourite meats. Two, where the item is preceeded by an FZ, it means it is frozen. For some reason, I didn't quite pick up on this and wound up with a pack of frozen rather than fresh chanterelles. Three, for the meats, the thickness depicted in the pictures can be a little deceptive, the steaks are thinner sometimes than the pictures suggest.

There is one other thing but I'll save it for later. Note also that the redemption and other functions are a bit hard to find, they are in smaller print, in green, on the left side of the screen before you hit the payment process.

I'd also like to order the 1kg piece of black cod for $41.90 the next time, except that I was wont to test their delivery of fresh fish and one can get it at the wet market on the day of eating. There are some items that are not very good deals, like the broths and herbs which can be obtained at competing gourmet stores for less.

Goods Delivery
The delivery process takes two days and for me, the experience was perfect. I ordered it at 11.50pm on Tuesday, just as the website said and it was delivered Thursday morning. I'm not sure how well it will work if you live in a high-rise flat or apartment though, I suppose it depends on whether they can find their way or are let through it you have an apartment entrance barrier. I also received a printed receipt (right now you can use your credit card to pay, although Paypal sent me subsequent emails about using their service to pay). Delivery is free for orders of over $150 but when calculating your total, don't forget you need to add in the GST, ie. the listed price of the items is not calculated as the total and final price. 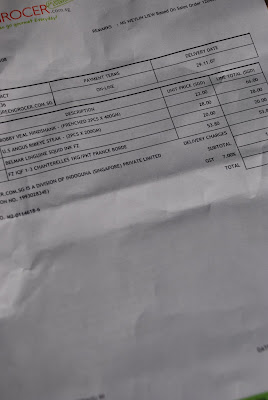 My Conclusion
While clicking out of the website, I discovered that the contact helpline was to Indoguna Singapore. How silly! Indoguna is where Colin and I have been getting our meats for ages, they are a wholesale importer located out in Woodlands and I guess Greengrocer is their retail operation. While they have their own abetoir, they are largely an agglomerator for other products and fine foods.

This would explain why the meats I received were very fresh but the other items were largely frozen and the squid ink linguine that I ordered was still in its original bag, with had an Italian brand stamped all over it.