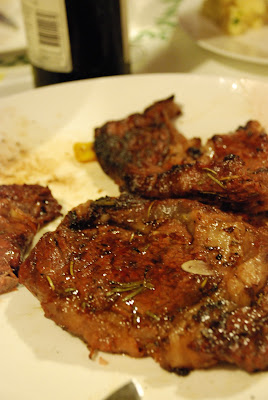 Remember those BBQs from your teenagehood? A gaggle of guys and girls crowded over a smoky pit eating half charred or half cooked pieces of skinny chicken wings, tough satay and canned Coke?

Those are terrible memories! Maybe it wasn't even about the BBQ at all, just to have something to do and a reason to invite people to gather. Since then, I've learned the value of a orangewood grill but never really been tempted to go back and stand over a charcoal fire.

Life throws you curveballs though. After many years of neglect and in preparation to host some college friends for a remember-those-times dinner, we finally got down to reviving the BBQ pit that my parents built into the garden many decades ago. It was exciting, building the grills, discovering that since my teenage years, Singapore has progressed to the point where we now have quick-burning charcoal (charcoal soaked in kerosene) and packs of hickory and applewood chips.

As luck would have it, the day dawned bright and windy but as it went on, grey clouds overshadowed the BBQ (although the weather was still perfect for outdoor eating). In the end, we had to make do with a makeshift BBQ but hey, it was worth it for a reason to wake up early to go to the market for some fresh produce. I was so happy I entirely overbought food (or so I thought but them good college friends came with matching appetites).

The beef above was a combination of 4 steaks of Grain-fed Ribeye and 2 steaks of Wagyu Ribeye from the Swiss Butcher and a 800g bone-in Cote de Bouef that I had bought and froze over Christmas from Greengrocer. The regular ribeye was surprisingly reasonable and very well marbled but the Wagyu is almost quardraple the price!

I must admit that the Wagyu does taste more tender and the Cote de Bouef was superb, of course the guys claimed it for themselves! I've heard it referred to as a super-prime, or a beef loin plus a beef rib, or in the US, a T-bone, which is the combination of a NY strip and the Tenderloin strip.

Sadly I have no picture of the largest cut of meat, since it took the longest to cook. The marinades were very simple, just lemon, a splash of red wine, rosemary, parsley and sliced garlic. The fragrance and juice was an explosion of meat, lemon and smoked applewood! 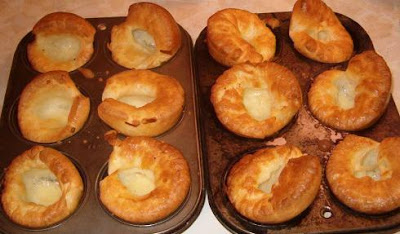 After a weekend of watching Jamie Oliver DVDs, I decided to make his Yorkshire pudding recipe, although the method of dumping batter in smoking hot oil struck me as a bit worrisome. I needn't have worried though, the recipe does work out perfectly and I'll definitly be making these from now on, it was both a cinch and a crowd pleaser!

1. Preheat oven to 220 C
2. Mix the batter ingredients together with a hand whisk or blender. Let rest for 10 minutes or a couple hours. The longer you rest the batter, the higher your puddings will be.
3. Preheat a Yorkshire pudding tray or a shallow muffin tin with 1/2-inch (1 centimeter) of oil in each section. The oil will heat up in the oven and when it's sputtering hot, quickly pull out the tray, ladle batter into each.
4. Put it back into the oven and cook for around 15 to 20 minutes until crisp and puffy, don't open the oven door before then or they won't rise.
5. Things to watch out for include, make sure your batter is not lumpy by mixing the eggs together first. Put a tray under the muffin tray in the oven to catch the spillover oil. Make sure your oil is Really Very Hot, or the batter will not cook immediately.

Don't forget to season the batter, as I did (producing somewhat bland although puffy puddings) and don't panic if the batter looks limp when you replace the tray in the oven, it Will puff up, just wait with the oven door closed! 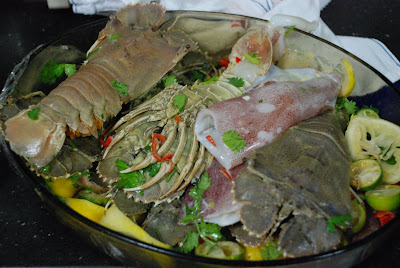 These are the crayfish and squid that I bought from Tekka market in the morning, marinated in ginger juice with cilantro, chillis, lemon and a splash of white wine. 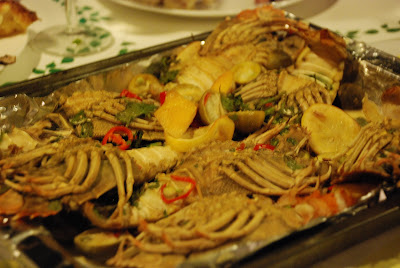 These are the crayfish after they're cooked, they don't entirely turn red so it's a bit deceptive. The BBQ squid was very good as well and significantly cheaper than the crayfish, which were about $22 for 7 medium sized ones, although they were fairly fat and meaty. 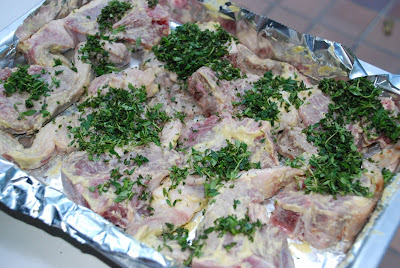 I also bought some lamb chops which I seasoned with herbs (thyme, mint and parsley) and ground cashew nuts and some sausages from Swiss Butcher, their white veal sausages and fat chipolata sausages are excellent and are I suppose, the higher grade alternative to the chicken picnic sausages or frozen chicken frankfurters from those teenage parties! 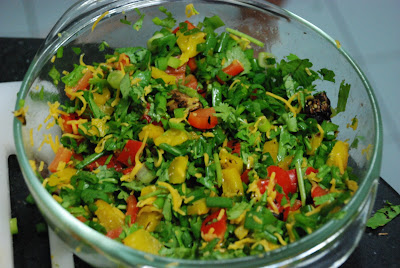 To keep the guests filled up while the meat was cooking, we made some quick vegetarian quesadillas. I'm slowly coming round to the idea that these are super effective and convenient snacks (this from someone who only ever ate egg white quesadillas with mushrooms in California). The filling of grilled capsicum, cheddar cheese and cilantro really is light and yummy. We omitted the roast chicken (which you can put in for a more filling regular meal) so that it would make a better snack and we finished several rounds of these. 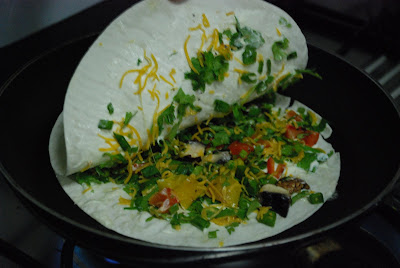 1. Roast two capsicums over an open fire till the skins are mottled black
2. Scrape away the skins and chop up the capsicum flesh
3. Roast two portobello mushrooms and dice it up
4. Mix into chopped cilantro and spring onion, mix in the chedder cheese
5. Pan fry some flour tortilla, spread the insides with sour cream and fill
6. Lay on a cutting board and quarter
7. Variations include adding sundried tomatoes, guacamole or shredded roast chicken. 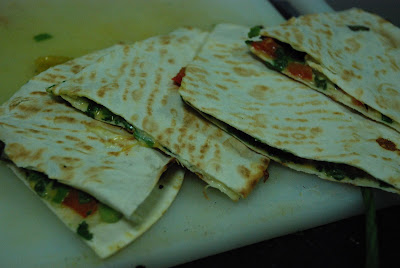 We also had an awesome salad from J. who completely outdid himself again. I entirely forgot to take pictures of it but it was particularly amusing because he snitched his mom's yu-sheng plate to contain the mountain of salad he'd made. It was a most imagenative combination as well, mixed salad greens with cherry tomatoes, sultanas, hazlenuts, walnuts, all mixed with a clever chutney jam sauce. Suffice to say it was a gigantic plate and it was all finished.
Posted by Weylin at 10:16 AM