This post came about because of a long-forgotten memory. Back at university, I used to make chicken claypot rice, or "sar-po-fun" in Cantonese, in the house rice-cooker. My housemates would gather at the kitchen table for dinner and my housemate from HK, R. would wait patiently for everyone to help themselves, then she would pick up the rice pot gleefully and scrape the bottom, where the caramelized rice had burnt into a crispy surface.

This is the best part, she would say happily. She's getting married in May. I had a sudden thought of reviving this dish over New Years and while shopping for "lian huo" or "New Year goods/food" at Chinatown, I picked up some chinese sausage (lup cheong) and fragrant dried mushrooms.

In Sinagapore (and probably everywhere else), there are two kinds of dried mushrooms. There are the chinese mushrooms, which are thicker, tend to have more white then brown surfaces and these are firm and turgid when cooked, providing excellent texture for eating but they have no real smell. The japanese kinds, tend to be flatter, with less bite but are more expensive becuase they have a nuanced and deep flavour and aroma. 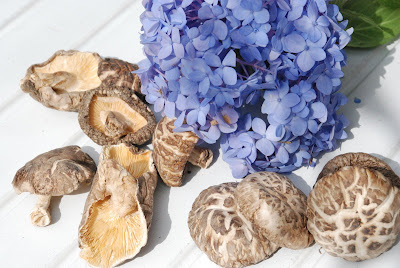 I like to make my claypot rice with both types, for a good hefty bite and good taste (the picture above shows the two kinds of mushrooms). I also like to find as many types of sausage, there's the regular lup cheong, there's also a darker liver sausage and in Macau, they make a really yummy, short, sausage, which I always thought, growing up, was a blood sausage, but I think it's some variation of the liver and extra fat pork sausage.

I've lately seen some websites referring to lup cheung (臘腸) as smoked sausage. Lap cheung is so named because its made during the lunar month of December, the 'Lap' Yuen (臘月) in ancient Chinese. It can be 1) wind-dried (most common; cookery classics say the wind can preserve the meat's 'umami' whereas sunlight can enchant its 'scent'), 2) baked or 3) smoked (least common; because the sausage is already well-seasoned).

The recipe that I use is fairly standard and general. The only thing that I think I do different and am fairly particular about is that I line my rice cooker with a lotus leaf. I feel that really gives the dish a unique and heightened flavour.

I tried to ask the proprietor at the dried goods store where to find lotus leaves. When I was in the US, it was very easy to find at any Chinese supermarket. My untrained non-Asian housemate went off and at my bequest, returned successfully with a stack of dried lotus leaves from Ranch 99, so I always assumed it was neither very difficult nor very labourious to procure. Strangely, in Singapore, they seem to be a lot rarer.

I was told to try some Chinese herbal stores but over the weekend when I was at Tekka market, I thought I'd test the hypothesis that you can buy Anything at Tekka market. The store keepers there are terribly helpful, they kept shaking their heads but pointing further into the market and saying "maybe there got". So I kept walking deeper and deeper into the market for a hot half an hour, losing faith with each row of stalls and almost giving up when I reached the very back and no one had any. 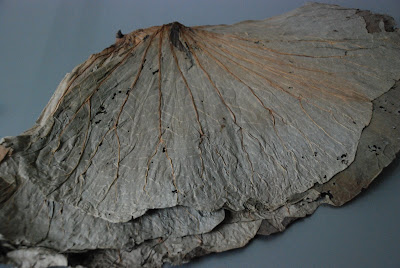 Then this old lady hanging about one of the stalls, pulled my sleeve conspiratorially and whispered "pssst, psst!" while pointing upward at a shelf in her neighbour's stall. Sure enough, right at the top, I saw two stacks of dried lotus leaves! I walked around to the front of the stall but the owner was nowhere to be found. Not wanting to leave empty handed, I stood on tip-toe and carefully extracted three dried leaves, then left a dollar on the stall counter before walking away.

The first thing you need to do is boil water and soak the dried mushrooms till they are whole again. Also, the lup cheong, like all sausage, comes with a skin, which needs to be removed. The skins are nowadays made of synthetic material- you need to plunge the sausage in boiling water, then quickly immerse it in ice water, then slice open one end of the skin and like a stocking, pull it off over the whole sausage.

Cut up some chicken meat (I like to use chicken thighs after removing the skin, as the meat is more tender than fillet) and marinade the meat with some dark soya sauce, a spoonful of oyster sauce, some chinese shao-xing wine, some sesame oil and a handful of diced scallions, cilantro and spring onions. You can choose to cut up the sausage and add it to the marinade with the mushrooms, or leave them both unmarinated. Marinate the meat for a couple hours or covered, overnight.

When you marinate, you don't want to drown your chicken in sauce. You need to stir fry the chicken, mushrooms and chinese sausage together and if you have drowned it in sauce, pour away most of it when frying or your rice will become too salty. Don't fry too long until the meat dries because the chicken will cook again in the rice cooker. 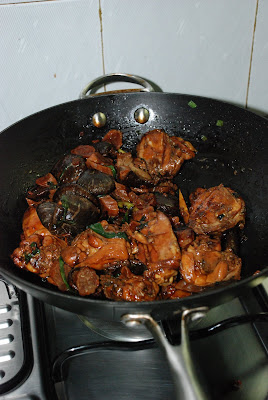 Then measure out your rice and wash it, draining out the water. Heat some sesame oil in a pan with chopped ginger, garlic and spring onions and dry fry the rice. (You're meant to fry the rice with the chicken fat that you cut off the thighs but it's optional).

Wipe and rub down the lotus leaf, inside and out, with warm water. You'll probably find that the water just trickles off the leaf, just like when it's in a pond. Spread the leaf open in the pot of the rice cooker, forming a rough bowl with the leaf. Tip in the rice and fill to required level with chicken broth (either home-made or packaged). 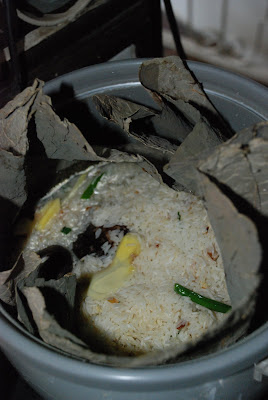 Ladle the chicken, sausage and mushrooms over the surface of the rice. If you want, wash some chinese green vegetables like bak choy or brocollini and lay it on top of the chicken. This will steam in the heat and cook naturally.

Wrap the edges of the lotus leaf inward, over the rice and ingredients. If you start with a decently large leaf, there should be enough to form a wrap over all the ingredients. Close the lid over the leaf and cook normally. When the rice is cooked, the chicken and vegetables will be steamed and you can unwrap the leaf package and sprinkle fresh cilantro and spring onion over the dish and serve. 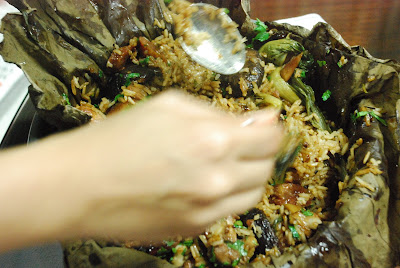 It has the most heady smell as and after its cooking, literally you can smell the meat and sausage juices melting into the cooking rice. This is a pretty rich and filling dish. If you have poor liquid to rice measurements, you may have to add a little more broth, or if it's too wet, open the cover and continue depressing the cooking switch on the rice cooker for some additional minutes, allowing it to cook and aerate at the same time. 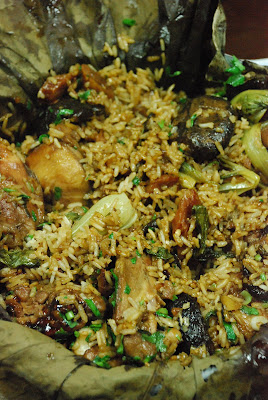 Variations include adding some salted fish to the dish, or marinating some hard boiled eggs and adding those into the mix. 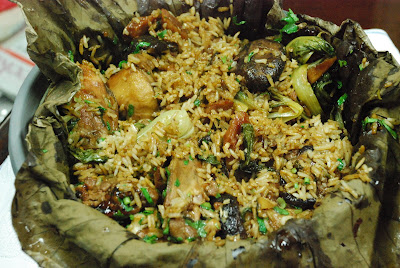