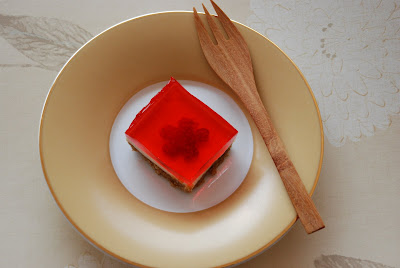 In Singapore, there is this cake-dessert, which is colloquially referred to as "Strawberry Jelly Heart". What it really is, is layered cheesecake squares, topped with heart-shaped strawberry pieces, encased in strawberry jelly. These trays of layered cheesecake are sold in slim boxes, usually by some home-baker, and have gained popularity over last few years.

Of course, it was only a matter of time before classes were offered and in reality, the core of the recipe is a simple one of a no-bake cheesecake. In fact, I'm not a huge fan of the combination of jelly and cheesecake and so I have never really pursued either the product nor the teaching.

However, I seem to be in the minority. When I announced I was going to make these, both my mother and Z. were really pleased. What I learned, is that while this recipe is simple, the assembly presents some engineering problems that I didn't quite expect to encounter.

The first part of preparing the base is simplicity itself. Crush 320g of digestive biscuits, melt 140g butter in the microwave, or in a saucepan and mix them together. Some people tell you to mash the biscuits with a mortar and pestle but I find the easiest way is to place them in a clear plastic bag and then steamroll them with a rolling pin. You can pick up a fruit bag from the supermarket for this purpose.

The finer the biscuits are crushed and the more butter you use, the easier the resultant mixture will be to press into a pan. There's a balance between not wanting to add more butter than is necessary and the ease of working with a stickier mixture - too dry and you wind up having a very flaky and uncooperative base.

This is the part that the kids can help with - using the back of a spoon, it's fairly quick and easy to get the biscuit crust even and smooth. Chill the mixture for at least 15 minutes (I like to put my crust in the freezer rather than the fridge because it's quicker) and when you take it out, prick the surface at regular intervals with a toothpick.

Before you even start on any of the liquid mixtures, I would suggest putting the kettle on for a fairly large quantity of hot, boiling water, as it is called for twice in the recipe. While it is boiling, cream one pack of Philadelphia Cream Cheese (250g) and 1 tsp of vanilla essence together in an eggbeater and start to fashion your strawberry hearts. 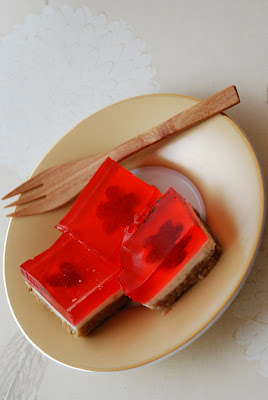 There were a few problems with my strawberries. The first was that the supermarket did not present much choice - either I could pay $8 for Driscoll strawberries from the US, or $3.45 for a smaller pack of unbranded but fresher Australian strawberries. I don't think it makes much difference, except that you should try to get strawberries that are slightly unripened. Mine were very ripe and you can see from the picture that they look a little too dark red.

The second part is the stamping. I didn't have a 1 inch heart shaped cutter. What I did have was a drawer-ful of random shapes, left over from our nanny, who liked to use them to make cute little carrot and turnip shapes for stir-fry or garnishing. I was able, for example, to make an entire suite of card-themed shapes from club and spade-shaped cutters. The only heart cutter was but 1 cm long and in the end, I wound up using a flower shape which was the right size. If you use a smaller sized cutter, trust me, you'll be stamping for an uneccesarily long time.

Even so, I found that strawberries don't stamp easily. They can be fairly thick and these ripe ones especially, were turning quite soft. More often than not, I found myself using a knife and slicing off uneven ends that straggled on the cutting edge. I guess this is one more reason to use less ripe strawberries and also, to remember to place your strawberries, after stamping, on kitchen paper, so that the mushy inner, pulpy side dries up.

It was probably at this point that I stopped envying all the home-bakers who made strawberry jelly hearts for sale. It's not as easy as it looks, I thought silently, with my hands dripping in messy strawberry juice and fibres.

At some point, the water in the kettle would have started to boil. Take a rest from the strawberries and in a medium-sized bowl, spoon out 50g of sugar and 10g of gelatin powder. Pour 1/2 a cup of your boiling water into the bowl and stir quickly to dissolve the gelatin powder and sugar. When it is cool, pour the gelatin water into the cream cheese mixture and continue to beat till smooth. This, essentially, is the cheesecake mix. Spoon into the biscuit crust, smoothen the top and pop it back in the fridge for 20 minutes. Warning, the cheesecake mix is slightly liquidy and discoloured looking, which might cause some concern but relax, this is normal.

The other thing to do now is to dilute 2 packets of strawberry-flavoured Tortally jelly in 300ml of hot water and 300ml of cold water (I used water from the fridge, made especially cold). Then, you can either stir the mixture till it cools or put it in the fridge for 15 minutes (but stir occasionally to make sure it doesn't set and harden).

Retrieve your tray of cheesecake from the fridge and press the strawberry hearts into the cheese at regular intervals. Envision cutting the tray into squares at the end of it and that will give you some idea of how far apart to space the hearts. You do have to push them a little into the cheese, otherwise, as I discovered, they tend to float up when you add the liquid jelly. When the liquid jelly has cooled (and hopefully, remained liquid), pour the jelly over the cheese layer, spooning it gently, so as not to dislodge anything. Then, place the whole tray back in the fridge for 2-4 hours.

Just to be safe, I waited till the next day to unwrap my jelly hearts and upon pulling the tray out of the fridge, I was quite pleased at both the depth and the consistency of the jelly layer. Gripping the aluminium foil firmly with both hands, pull/lift the tray of cheesecake entirely out of the pan and onto a flat surface. If you try to cut the cheesecake jelly inside the pan, you will wind up with rather crooked lines and messy edges (witness my prototypes).

What I learnt from this recipe is that even though the process is simple and no-bake, presentation is everything. These small steps, details like covering the tray base and sides properly with aluminium foil, spacing the strawberry hearts evenly, lifting the cheesecake out to slice on a flat surface and wiping the knife between each cut, are all essential to getting a product that looks respectably-made rather than crudely fashioned.

I got many positive comments on my strawberry jelly hearts so that is proof that you can score a success on the first attempt with this recipe. Have fun!
Posted by Weylin at 1:03 AM

thank you for sharing this! they look great :o)

hi there! would like to know the recipe for this jelly-hearts, what's the quantity that is able to produce? cause i'm actually intending to make that using quite a big heart-shaped tin. thanks! =)

I made just a small quantity of them, a 9 inch by 5 inch tray. If you want more you should probably double the recipe.