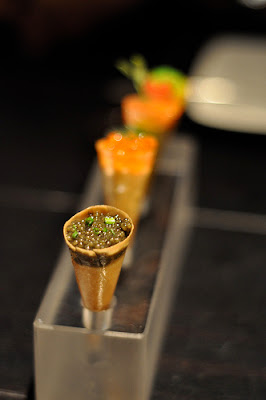 I have managed to fall in love with a lens, even though I don't have a camera with me! These are the gorgeous photos from our meal with M. at Bazaar at the SLS Hotel in West Beverly Hills. It was a wonderful treat from a wonderful friend and everything about the dinner was so special.

What I read about Bazaar is that it cost more than $12 million to build and grossed more than $13 million in its first year and that it attracts celebs like Natalie Portman and Selma Hayek. I would imagine most of that money went into the kitchen and the army of chefs in the kitchen, although the bordello style dancefloor dining room and spanking white bathroom with reflective surfaces and a throne-like white leather studded armchair might have cost a little more than it looks.

The restaurant serves no appetizers or entrees, all meals are made up of tapas, and signature items include drinks and canapés dipped in vats of liquid nitrogen. The menu is Spanish, divided into dishes that are traditional and "modern"—the unusual creations of Mr. Jose Andrés, who in his youth cooked at surprise, surprise, Spain's El Bulli. The style of 'small plates' is something that is picking up popularity or faddishness, depending on how you see it.

This prelude might sound hokey but this meal immediately shot to the top of our LA list, no mean feat given that we were already very happy campers after the JAR and Daikokuya experiences. Although there were some elements of molecular gastronomy involved, it was done with a very light hand and the cooking was wholesome, creative and very tasty. We were four people, two omnivores, one pescetarian and one vegetarian, so we managed to try a real spread of their tapas dishes. 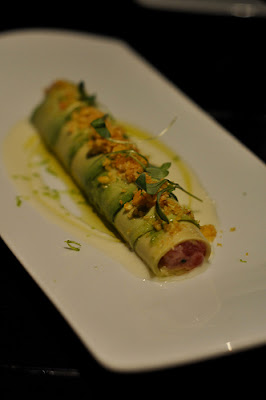 You can find the full menu on Zagat by searching the restaurant name, as well as the per-dish price (which was about $7-12 per plate), suffice to say that we did not try even a quarter of the many interesting dishes, so I am looking forward to a brand-new meal there in the future! I'm not sure if there was a particular order to the way that we received the tapas, in fact it probably adds to the diversity to mix up the cold and hot, modern and traditional tapas.

The cover photo is of the caviar cones, the one in focus is the American Caviar Cone, then the Bagel and Lox Cone, the Californian Cone (guacamole with tomato hearts) and the West Hollywood Cone (with rainbow tobiko). These were light and airy and the tranluscent thin spring-roll-like skin was a great counterpart to the sweetness of the cream cheese and the saltiness of the caviar. Visually, this was just a great little treat.

The first plate to arrive was the tuna cerviche and avocado roll, with jicama, micro cilantro, coconut dressing. While the execution of the avocado roll was charming, it was the addition of coconut, cilantro and jicama to the dish that really amped up the flavours and succulent quality of the cerviche. This went really quickly- four bites! 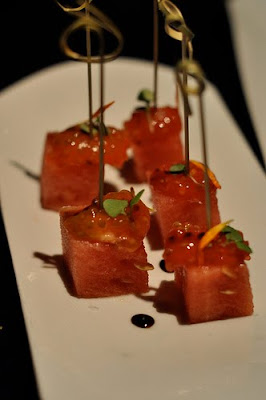 The second plate was the watermelon skewers with the tomato hearts. This plate also had great flavour but I was a little less impressed because I surmised that tomato hearts basically means tomato pulp and seeds, which were extracted from the rest of the tomato that probably went into their gazpachos and cocktail drinks. This is definitely something that we can easily do at home for appetizers though and a really good combination. 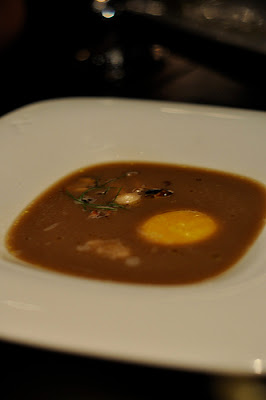 The third plate was the wild mushroom soup. What I loved about this dish was the presentation. The waitstaff (all very knowledgable, discreet and smiley) plopped an egg yolk, a stack of shaved Idiazábalcheese, minced herbs and I think some sauteed onion on the plate and then poured a steaming mushroom consomme over them, from a sauce jug. We were then instructed to whisk the soup together and boy, you could taste the addition of the cheese and egg yolk alright. Rich, sweet and savoury, the whole bowl of soup was demolished and praised. 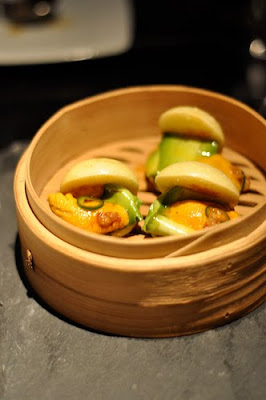 The fourth plate was one that I picked because of its ingredient, sea urchin. The sea urchin pieces came nestled in steamed buns, almost reminscent of chinese dim sum and were accompanied by slices of avocado. It seemed really easy to make but sea urchin is becoming such a common addition that the combination of the richness of the urchin and avocado and the bland sweetness of the bun was quite simple, yet unexpected. 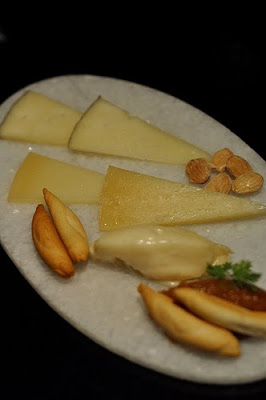 The fifth plate was also me making up for a disappointing cheese plate at Mozza the night before. This cheese plate was the Manchego 'Pasamontes', Murcia al Vino and the Idiazabal cheese which appears often throughout the menu. 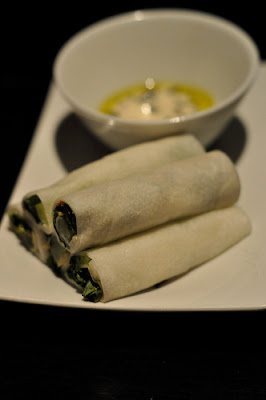 The next plate, jicama rolls with mint, basil, pickled ginger, cucumbers and coconut dressing was probably the best. The jicama exterior was shaved thin, rather like the japanese restaurants do but the application and flavours were very different. The total taste was very balanced, yet light and juicy and somehow you just got the feeling that it was healthy and good for you- this is the one dish that I would have loved to learn the proportions for. 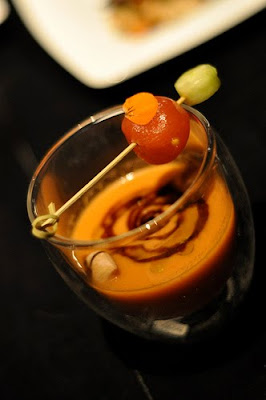 The seventh plate was actually another soup, this time a cold tomato gazpacho, with a pretty garnished, a peeled cherry tomato skewered with a flower petal. The gazpacho was unlike the deeper lobster and tomato bisque that we had at JAR, this was chilly, yet deep, nuanced and spicy, probably with the addition of the dark sauce, perhaps caramelized, reduced balsamic vinegar? I guess if I were to make it, I would mix the vinegar with a smidgeon of fish sauce, just to confuse. 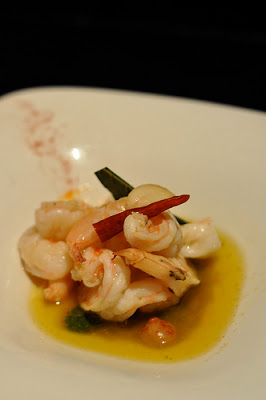 The eighth dish was sauteed shrimps with garlic ajillo and guindilla pepper, this was tasty but less interesting to me, very much like a chinese stir-fry, just with different flavours from the olive oil and peppers. 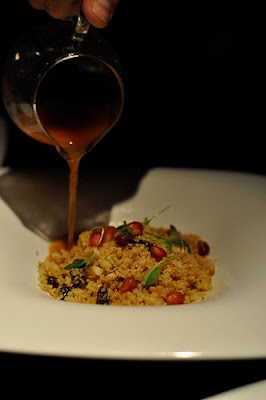 The following dish was the one that some of the others thought was the most creative and unexpected. This was a cous cous made from cauliflower puree, harissa, lemon, fried quinoa. It looked like a fairly ordinary cous cous, studded with pomegranate seeds but the cauliflower puree had really been infused into the rice and it was delicious! Again, it would be interesting to know more about how this dish was conceived and cooked. 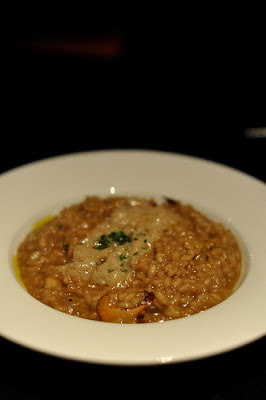 The plate that followed on was a little similar, a risotto of wild mushroom with cheese. What made this plate was the beautiful consistency of the rice, the thick, chewy, pungent mushrooms and the wonderful creaminess of the dish, it was one of the best risottos I've had and it's amazing that the kitchen can sustain that kind of quality over small plates and quantities of risotto. 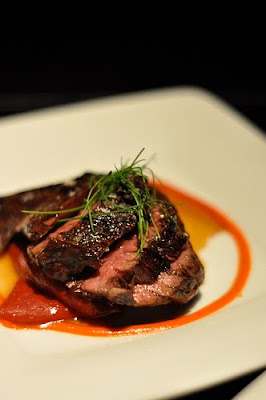 We had come to the part of the menu chosen, clearly, by the omnivores. This was the Hanger Steak with piquillo pepper confit accompaniment and dill, grilled and crispy on the outside and soft and juicy on the inside. After the vegetarian and pescetarian dishes, it was almost shocking to see the bright waves of red on the plate. The steak was about the size of my palm and cut into luxuriously thick slices, my fellow omnivore cheered when he saw it arrive. The strange thing about the meal is that often, you imagine that small plates don't really fill out up but this was like eating a good dim sum meal, the speed of the food was just right and we left feeling, actually, really sated. 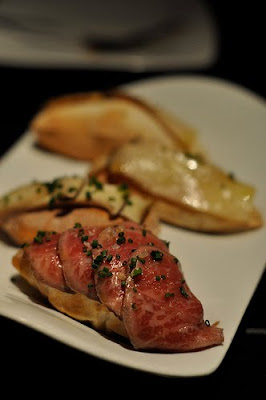 The next plate was the cleverly named ‘Philly cheesesteak’, consisting of air bread filled with cheese and topped with Kobe beef. There was also Hilly cheesesteak, which was airbread topped with melty cheese. I chose the latter which I think was the wrong choice, although both were beautifully executed. 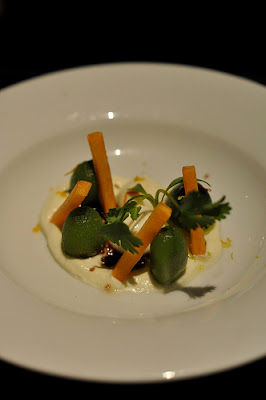 The fourteenth and last plate was not a dessert but it almost functioned like one for us, it was Japanese baby peaches and persimmons with yogurt and olive oil. I didn't really taste the peaches, these tasted more like sugared kumquats and kiwi but they were really sweet and contrasted well with the yoghurt. It was a great way to round off the heaviness of the beef and cheese. The only thing that I would say about Bazaar which was a little wanting is that although the service is great, the dramatic lighting, hotel lobby location and lack of a chef leave it feeling a little impersonal but perhaps it is better that the food is the focus. Do yourself a favour, even if the photos don't have you already drooling, take it on my word and book this place (I hear it is not that easy to get prime reservations) if you are in LA, it is the kind of place of happy eating, one of those meals that effortlessly dispenses all thought of diet.

Anonymous said...
This comment has been removed by a blog administrator.
2:09 PM

We are a food delivery service operating in Singapore. I am writing to see if you might want to work with us by exchanging links
with us. Meanwhile, You can look up our website for some info on what we do.

If you are interested, kindly email me at peterlim@fooddelivery.com.sg.

Hope to hear from you soon. Thanks!