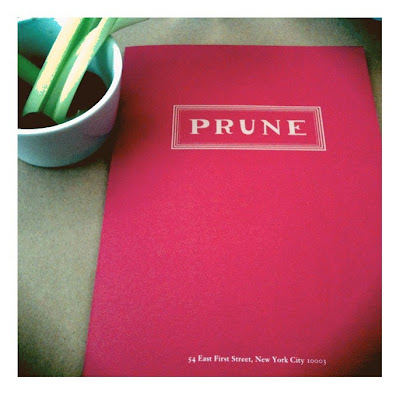 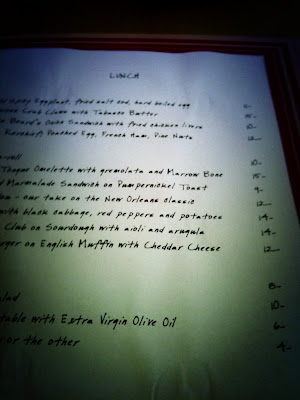 The next day, we had made a lunch appointment with an old friend and we decided to try our luck with Prune in the East Village, which has no reservations. Arriving at 1pm, we were shown into a faux-vintage French street corner bistro (complete with coppered mirrors and shabby tables and a shabby hairy old man in the corner seat, poking at his very raw steak tartar). 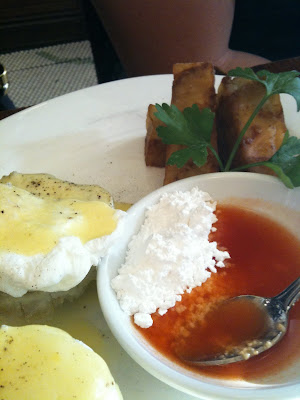 Secretly, I wanted to find Prune poor because it would vindicate my prejudice against restaurants that won't let you make reservations and which have perky blonde pink-teed waitresses that look like they were mean in high school. However, having been recommended it by a fellow blogger, as well as a chef-friend, I knew it probably would not be. 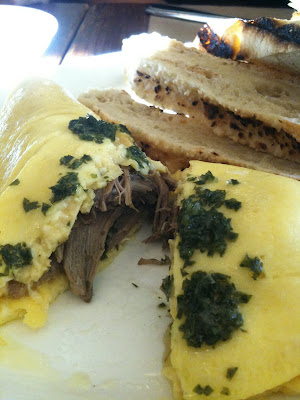 What I was not prepared for though, is how clever the cooking was. M. and I shared a tasty French omelette of beef tongue and bone marrow and an Eggs Sardon, a wicked take on the Eggs Benedict, with a poached hollandaise egg on top of a steamed artichoke heart, served with a slightly tangy Thai chilli sauce. The beef tongue was braised till it was tender and falling apart with the juices and sweetness of onion and stewed accompaniments. It was fantastic and comforting, I could have eaten one everyday. 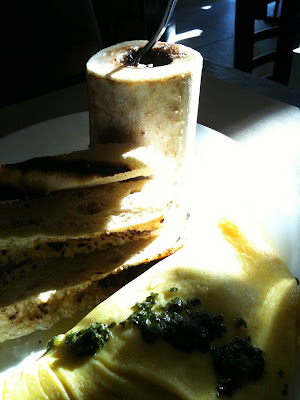 The sea bass that Z. had was also very good, well-crisped on the top and sitting in a comforting soup bed of salted vegetables. 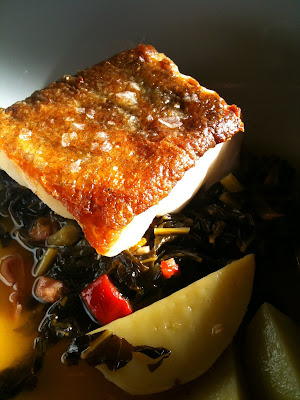 At $12-15 a plate, I had to concede that Prune was a charming, lovely spot for an off-peak meal and that the food was some of the best casual combinations I had tasted in a long while. If I lived in New York, I would go every time I didn't have to queue. (Only much later, did I discover, to my horror, that they Do take dinner reservations!) 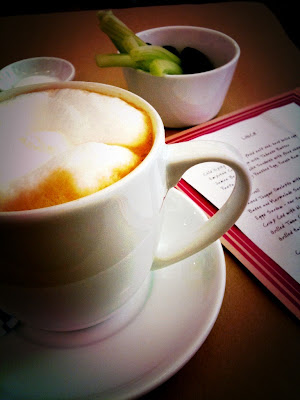 After lunch, I wheedled M. into a search for the best Tres Leches cake in New York. I had read an article on Chowhound which suggested that two of the best were to be found at Cafecito, Cafe Cubana and Ideya. Ideya I actually knew, I often passed its blue and white tiled interior on my way to work, many years ago but I had never stepped in. In any case, their Tres Leches was only voted on the strength of its unusual banana topping and I was after the original. I was really keen to go to Cafecito, which was all the way out in alphabet city- Avenue C.

It must have been because she had not seen me in a long while, for her residual guilt caused her to trudge semi-willingly, a great distance, to reach a shacky Mexican street. The cafe seemed closed but luckily, we were directed to the restaurant of the same name next door and two aluminium foiled plates were shoved at us. This cake was topped with cream and pineapples, a nice touch, but it was dense and crumby. It didn't have the lightness of the Cafe Lalo version, instead it was reminiscent of a rum baba, except with milk.

On our way back to Chelsea (we had decided to walk because it was one of those bright glorious days where the smoke billowed white against the red brick and river blue sky, where the sun shone warm but the wind blew cold), we passed Ippudo and decided we should have ramen.

Half an hour later, we walked passed a Singaporean-Malaysian restaurant Laut and decided we should spend $13 on a sub-standard Chicken Rice- they were still closed before dinner, so we had them deliver when we finally got back to the apartment. We were recommended the prawn noodles at this restaurant, which was better than the Chicken Rice but neither were really South East Asian standard. I'm not entirely sure what made us eat literally, every few blocks but I guess that's just what you do with friends you haven't seen in awhile.

Less than two hours later, we were due at Convivio for dinner with another couple of old friends who had generously offered to take us out to dinner. Our plans were slightly curtailed by one of them having to hightail back to work, so we decided to have the two item set menu- the

Convivio is one of Michael White's trio of Italian restaurants and has a Michelin star, it's the sort of restaurant dating couples would praise, with its slightly reverbatory atmosphere and dim lighting. The food, especially the pasta, is certainly excellent and it's one of those places my parents would like, if you know what I mean. I have a feeling one word that would describe it is "consistent". It's old, it's well-heeled, it's sensible but slightly lacking in personality.

On Friday, I had a letterpress class in Brooklyn that lasted till the afternoon. Had I thought about it better, we could have gone to this Danish Vintage Furniture warehouse next to the studio and tried to get seats at Franny's or Purple Yam in Brooklyn. I had heard much about Franny's, its genesis, its founder’s commitment to local, sustainable agriculture and it's delicious, environmentally responsible cuisine. I had also heard about the crazy queues and their no-reservations policy, so even for a restaurant that had me at "franny's is a team of over 20 hardworking and loyal people who are committed to giving our guests the highest quality and most consistent food experience possible", it was a bit of a stretch. Purple Yam is a brilliant Pilipino restaurant, run by the folks formally at Cendrillon (till the high New York rents ate them and spat them out in Ditmas Park, Brooklyn), which I'd been meaning to try.

However, I was too keyed up and full of letter pressing information to think straight, so we skipped lunch and ran some errands until dinner at Dovetail. The dinner at Dovetail was with The Alpha Male, so I can't really say anything bad, can I? I was a little surprised because I thought from the pictures and review that Dovetail was a hole-in-the-wall and thus was giving him major props for having found a gem of a place in the swanky upper west of all areas! Five years after the day, I still remember his rather-seductive description of making your own sushi with ponzu sauce, so that boded very well but as it turned out the place was actually a fairly large, very corporate looking- non-descript decor restaurant with chandeliers, thick napkins folded in fans, condescendingly beautiful staff dressed in black who take your coat (and it was next door to the new, indoor Shake Shack). It filled up with immense speed over dinner and the food was really good, just really...well, safe.

The restaurant was the 2009 NY Mag's critic's pick for 3-star restaurants and the chef, John Fraser, a veteran of some of the world's great kitchens, including Thomas Keller's The French Laundry. The disappointment was that the food was well executed, but more like a study in French cooking, than an exercise in creativity. I had a beet-related appetizer, a duck breast with a cherry reduction and pistachios and a cheese plate for dessert. The most exciting part of the meal was the conversation (not necessarily a bad thing) and skating at Bryant park in the chilly cold after dinner. 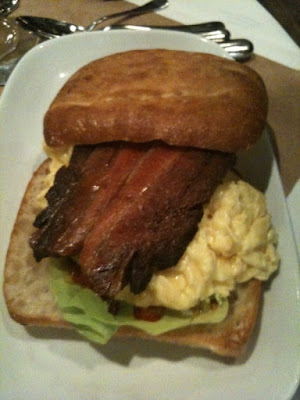 Sadly, our holiday was coming to an end, marked by a weekend stay with old friends and Saturday brunch at Craftbar. Craftbar is Craft's informal sister-restaurant, helmed by Chef Tom Colicchio. It was very crowded for brunch when we went and the food was not bad but not exactly innovative (then again, it was brunch, not dinner). 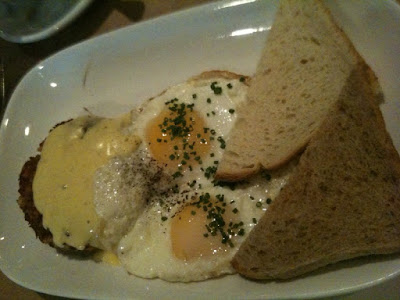 The space and decor were modern-cool but again, rather crowded in a city with style to spare. We had the staples, the breakfast sandwich, sunny-side-up eggs and hashes and then a few more interesting dishes like the French toast (mediocre) and the spinach egg white frittata. 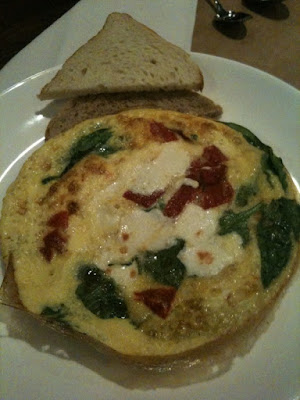 That night, we went out for a late dinner at Pearl Oyster Bar, an old haunt I had not revisited since college days near NYU. This place is quite a gem, it's a little hole in the wall oyster counter, serving up mussels with frites, shucked oysters and the most gigantic lobster roll you've had in awhile. It doesn't take reservations for dinner, is thus invariably crowded and the line forms out the door (a pretty good feat on a bitterly cold night like the one we were there on). 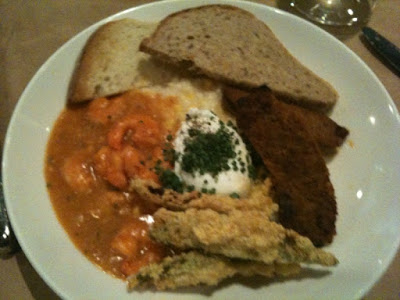 We declined to wait for a table and got seats at the narrow marble wall-facing counter straight away. We brought our friends, one of whom isn't even a big seafood lover but the lobster roll, with its sweet mayonnaise meat and toasted glazed bun and mountain of shoe-string fries, convinced her. It is as good as I remembered it, although now that I have a better comparison, the clam chowder and oysters are better at Swan Oyster Depot in San Francisco but the lobster roll is better here. Till 2011!