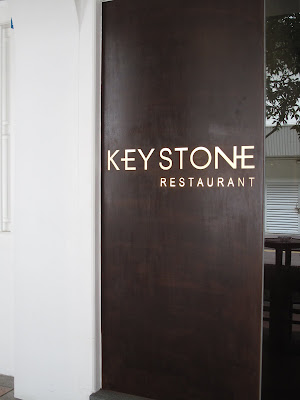 Whoever owns Keystone Restaurant really has a thing for rocks. "By its nature, a Keystone is an architectural feature, which... encompasses strength and resilience, and its mighty characteristics make it the most integral part of every structure", the restaurant's website declares. 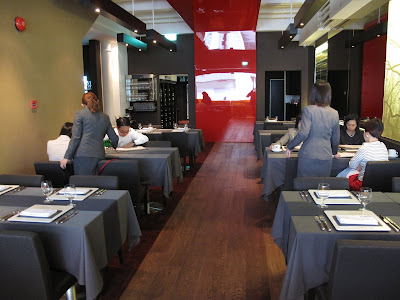 Fair enough, I suppose, but it's only if we remember that "keystone" also describes a type of limestone does that explain why all the tables are set with grey and black tablecloths, or why the waitresses are all kitted out in ashen suits, and why the plates have slate inlays. 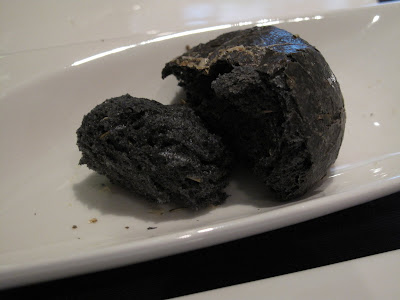 Even the bread, it would appear, is in theme. Not that I'm complaining; the jet black sphere of focaccia bread, dyed with (I think) squid ink, is served piping hot, and when broken open exudes a lovely aroma of rosemary and olives. I'm not usually impressed by bread at restaurants, but I must say this was excellent. 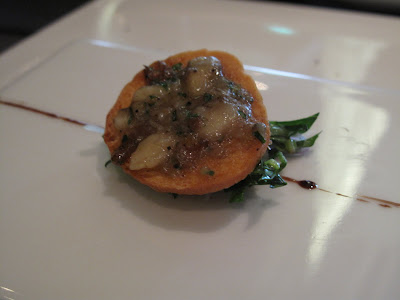 The restaurant considers itself modern European, which unfortunately means a penchant for the menu to describe everything in only proper nouns ("Pistachio & Peanut Butter | Custard | Brittle | Chocolate Pool"), but, more positively, also a willingness to explore different flavour and texture combinations, such as an amuse-bouche of toasted tomato crostini with bone marrow, which was both crunchy and unctuous. 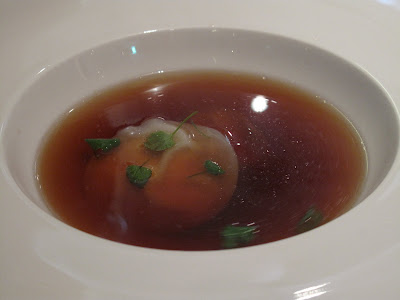 Modern European doesn't necessarily mean a lack of Asian flavours though, as the lobster and ginger consomme demonstrates. The broth, perhaps darker than I would have imagined, carries with a subtle heat and the distinctive taste of the ginger rhizome, while the supple ravioli enfolds the lobster meat like an upmarket shrimp wanton. 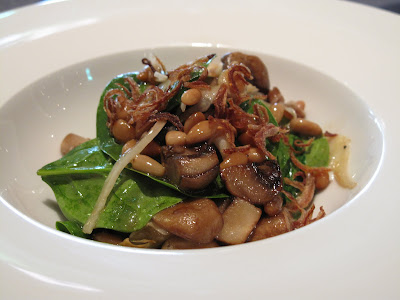 A starter entitled "Shimeji and Shiitake" was not exactly what I had expected, for I had envisioned the mushrooms being the main event, but it turned out that "Baby Spinach | Asparagus | Fennel | White Truffle Emulsion" meant the dish was in fact a baby spinach salad with mushrooms. Still, the delicate nuttiness of the spinach leaves, together with the earthy mushrooms, and what appeared to be pine nuts rather than fennel seeds, made for a fairly enjoyable salad. 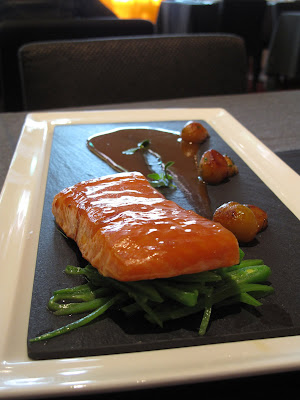 The petite portions of the appetisers are misleading, however, as the main courses soon revealed. The sous vide Norwegian salmon, glazed with kome migu miso, is enormous, and a generous bedding of julienned sugar peas ensures that there's always something to go with it. Sous vide is a marvellous way of cooking a fatty fish like salmon, for it ensures that the salmon does not become tough and leathery, but instead retains its oleaginous mouthfeel and beautiful colour. 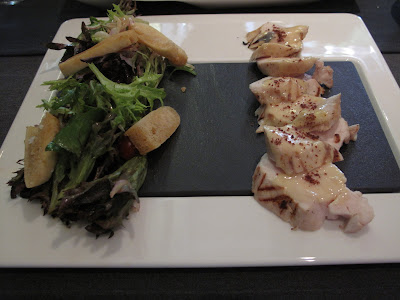 Unfortunately, sous vide technology was not entirely sufficient to prevent my La Sirena chicken breast from drying out slightly (as far as I'm concerned no Western chicken breast can beat a properly-prepared Hainanese chicken rice breast), though it was a valiant effort, and with a sauce of melted Gruyere cheese, it was easily overlooked. 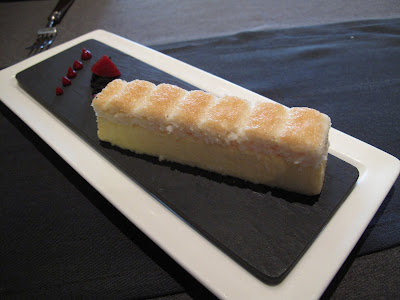 The desserts at Keystone are, perhaps, the keystone, for the passionfruit cake was the perfect combination of light, fluffy coconut sponge and sweet passionfruit sorbet, served with an intense raspberry sauce to counterbalance the sugar content. 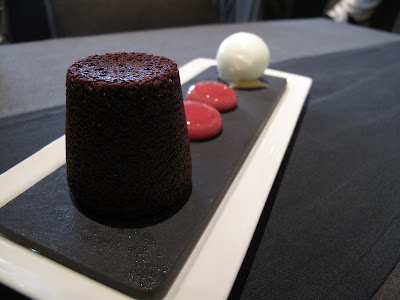 The valrhona fondant I had was a thing of beauty - having baked these things myself, I know how difficult it is to make them appear attractive, but Keystone's version was perfectly formed, without any hint of cocoa dusting or any of the other common imperfections. Served with a sudachi (a Japanese citrus fruit) sorbet, and with peach spheres (really they were globules rather than true spheres), I could think of no better way to end the meal.

Food at Keystone certainly does not disappoint, but at $38 for three courses and coffee, Keystone's set lunch seems somewhat steep to me, especially for a relative newcomer located in Stanley Street, which is its biggest drawback, for it is impossible to find a parking lot at lunchtime. Perhaps it would do well to remember that a "keystone" species is also one that has a disproportionately significant effect on its environment, and if Keystone Restaurant aspires to that position, there is still some evolution in its future.