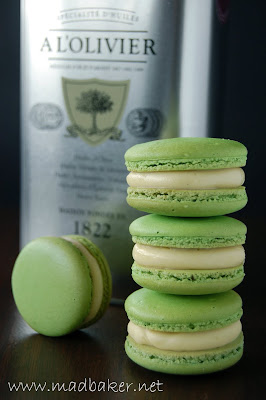 This week, I celebrated the launch of the Pierre Herme book in English in a big way by baking with C. and K. of MadBaker fame. I picked the two flavours that had the biggest impact on me when I tried them in Paris, Jasmine and Olive Oil. These were flavours that both my baking buddies had never considered but they gamely agreed to have them a go. K was even gracious enough to lend her gorgeous photographs to the occasion, please visit her blog for more beautiful macaron creations here

The session was relatively without incident. Clearly, the baking gods were smiling down upon us, even with white chocolate recipes that are prone to seizing up. The Italian meringue recipe for the shells is not different to what I usually use, only the addition of colouring surprised me- there is quite a lot of colouring added and it makes the batter somewhat softer than I am accustomed to.

For the first recipe, we steeped jasmine tea in cream, which was then added to the melted white chocolate. K's concern was the too-high proportion of liquid to solids in Pierre Herme's ganache recipes, which is something that has been brought up before. Mine was the amount of tea used, I knew from my experience with Darjeeling tea tarts that a copious and wasteful amount of tea must be used to extract flavour in cream or custards. The recipe called for just 25g of tea, which seemed improbable, given that we were then diluting it with a far more flavourful white chocolate.

Both concerns as it turned out, were accurate, we reduced the cream:solids ratio to 1:1 for the jasmine recipe which worked out well but the flavour was still weak and like the earlier Earl Grey macarons, dissapated fairly quickly. In his footnote, Pierre Herme says he uses Sambac jasmine essence for this macaron, which is definitely something I would consider if I made this again.

The book, I concluded, is quite a fascinating read about all the different flavours, sorted in buckets like staples and then "fetish" flavours. Some of the photography is just beautiful and breath-taking, for example, the pure-white Alba truffle macaron, which is shot against a panel of mirrored glass, or the ostraica caviar macaron, sitting amonst jet black caviar in a vat of dark lilac ice cubes. However, some of the photography shows smashed macarons and collapsed interiors.

There are also some inexcusable errors in the book, which really should have been spotted by the copy editor and which leads me to suspect that there wasn't a recipe tester. For example, in the carrot macaron recipe, the ingredients list excludes the chocolate ganache, while the method includes it. For the Milk Chocolate and Earl Grey Tea Macaron, the ingredients list includes 12g cocao pate but nowhere in the method does the ingredient appear. 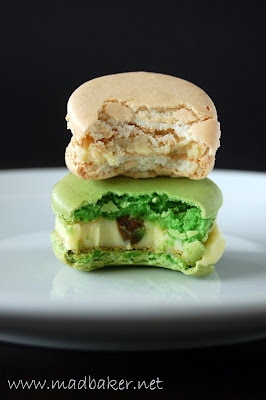 For the olive oil macarons, we used a strong, fruity Provence oil from A L'Olivier, which wound up being somewhat too strong. I was looking for the greenest Italian olive oil, thinking this would have the strongest flavour but we would have been better off with a young but fruity French olive oil. If you are going to try the recipe, I would strongly advise using a single vineyard oil, I've bought one before from a Parisien farmer's market that would have been perfect for this purpose.

We emulsified the oil into the ganache, which formed a fragrant, smooth paste, then loaded the inside of the macaron with diced Sicilian green olives that had been washed of their brine. These Silician olives are darker green, larger and sturdier then the regular Greek Kalamata olives and they are fantastic, turgid and chewy, with a real salty kick.

K. did most of the heavy lifting of sifting and macronage for these, while C. and I got to do the fun parts, like slicing, piping, matching and filling. I stacked them with dark chocolate ganache macarons in assortment boxes and overall, I'm really happy with the way the recipes turned out, even if we probably will move on to the more conservative flavours!

* Having now made some additional flavours, I realize that there is two added issues- first, the addition of colouring to the egg white tends to make the shells soft and wet. Also, some recipes call for compotes which are frozen into jellies (like in the Arabella macaron), without gelatin. These frozen jellies are then sandwiched within the ganache but when they start to melt, they also make the macarons shells wet and soft.
Posted by Weylin at 11:23 AM