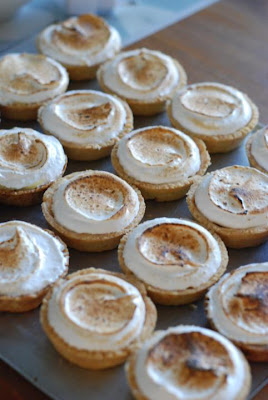 I don't know if you've heard me say it before but my favourite bakery in the world is Miette, in the San Francisco Ferry Terminal. My friends all cringe when they hear me talk about it yet again but you have to remember that back in the day, it was one of the first bakeries to champion the use of local produce, organic, fresh dairy and it was helmed by a home baker who got her start running stalls at farmers markets.

I loved everything about them, from their little loaves of lemon tea cakes to their packagine, stickers in cool powder tones and cursive fonts that walked the fine line between elegant and cute. Miette's tagline is American, impeccable and charming. Even the owner's name, Meg Ray, is so impeccably and charmingly American, don't you think?

When the Miette cookbook eventually hit the market, I didn't hesistate to pick up a copy and was excited to finally be able to execute some of the treats that I had enjoyed for so long. For those who are interested, yes, the book is much cheaper online then in Singapore bookstores.

No sooner had the book been delivered, I received a retraction notice for mistakes in the book. Upon reading the book, this is very apparent, in one recipe, 1 1/2 cups is converted as 7.5 oz while 1 1/4 cups is converted as 4.5 oz. The 61 reviews on Amazon point similarly to poor technical editing and poorly-written and therefore unclear directions, and the price has plunged from the initial $28 to $15. Luckily for me, American consumer rights meant that Amazon would send me a new copy of the corrected book in October and I could also keep the copy that I had already received. No such luck for people who bought it in stores in Singapore. 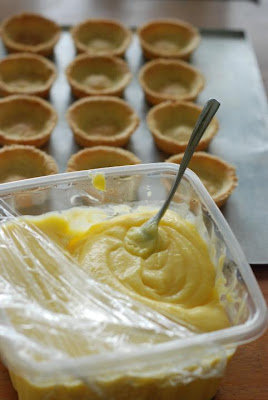 We had decided to test two of the recipes, the first the lime meringue tart and the second, the tomboy cake and the third recipe we made was David Leibovitz White Chocolate Ice Cream. However, this day of baking was not destined to be as successful as last month's. First, I bought lemons instead of limes. Nothing loath, we made the custard for the ice cream, melted down the white chocolate and churned the ice cream and swirled in some artisinal grape jam from Lisbon that I received from my Portugese neighbour (no incidents here).

Then we grated the lemon, squeezed the lemon juice and stirred the curd over a water bath. Ray's lemon curd recipe is not unusual, but what stands out about it is a high proportion of lemon rind and a huge amount of butter that is stirred and melted into the cooling lemon curd. We doubled the recipe but if it seems too little, not to worry, it really lightens and puffs up as butter is stirred in and as the mixture cools.

We used her sweet tart pastry for the tart shells, as opposed to the graham cracker crust, graham crackers being in rather short supply in Singapore! This doesn't give you as nice a honeyed colour on the tart but the texture is lighter, flakier and saltier. It is a really interesting recipe, it calls for cream into the tart batter, which I'd never done before (but which makes a lot of sense). 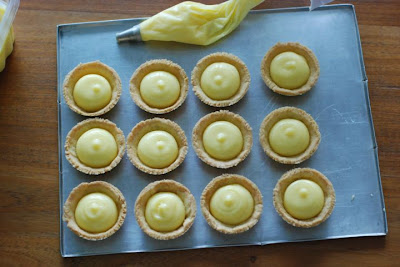 The most annoying part of the recipe, for me, was the boiled icing. In theory, this shouldn't be hard to make at all. Boiled icing is the starting point for macaron meringue, for marshmellows and for buttercream icing, utilising the same method of heating a sugar syrup and pouring it into beaten egg white. The first time though, I didn't read the recipe carefully, which said, beat for 10 minutes only, if you continue beating, the icing will become hard and stiff and impossible to swirl. I realized this mistake precisely as I was trying to swirl the icing. We wound up beating the whole lot into buttercream and starting over.

The second time, I neglected to use a candy thermometer and the mixture became too hot. C. turned off the flame and the sugar started to caramelize. I turned the flame back on, realizing this but then even as it uncrystallized, the mixture became even hotter. When it was poured into the egg white, we started to see little grains of sugar, becoming visible in the previously smooth icing. Great. From then on, it was a balance of trying to smoothen out the icing without beating it stiff. 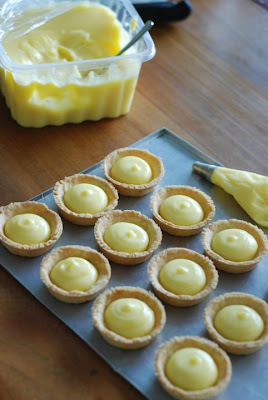 This recipe really does work well and the lemon tarts are gorgeous when they are cold. However, I started to feel that Ray leave out a lot of the technique in her writing. The recipes are okay, in fact, the lemon curd recipe is excellent but there is very little instruction on presentation and what there is, is pretty skimpy. It makes it sound like everyone should know how to level a cake evenly or swirl icing with a spoon. There aren't really step-by-step pictures in the book either, the pictures unhelpfully cut out when the going gets tough. 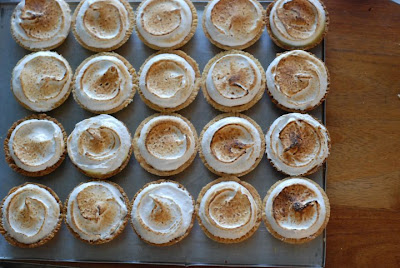 For example, what I did at first, pipe the lemon curd with little tips in the center, is actually not helpful to layering on the boiled icing. To ensure that the icing covers the curd, it's better for the curd layer to be flat, rather than domed. It is also easier to work with cold curd, so that it doesn't shift around as much, when the icing is piped on top of it. It would also have been helpful to have some idea of how much icing to pipe in- too much and you wind up swirling the meringue out and overflowing the tart shell, too little and it can be hard to form any swirl at all. It took a long time to get these going and they don't even look anywhere as pretty as in the book. 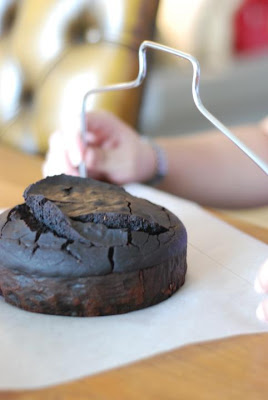 The tomboy cake is another example of a really interesting recipe but a rather screwed up presentation guide. This is one of the first instances where I've experienced a recipe where the chopped chocolate is melted with hot water! This is added to eggs beated with oil, then buttermilk and vanilla essence are added and the dry ingredients, flour, cocoa and leavening agents. Most of the chocolate from this recipe actually comes from the 1 1/4 cups of cocoa, because there is only 60g of actual chocolate. The resulting mixture is somewhat thick and gunky.

This went into two 6 inch pans and the recipe actually says 2 6-inch cakes can be made. However, we experienced two exploded cakes and were only able to salvage enough layers from both to make one cake. This was my first experience with a cake doweler and I have to say, it's a really nifty little device. It's essentially two levels, attached by a thin wire that cuts through the cake. 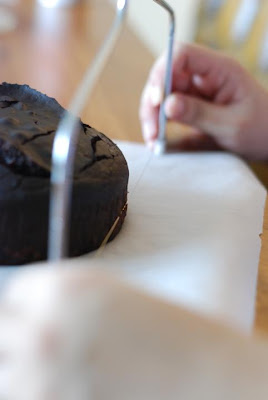 As we started to stack the cake, the puzzled of why the cakes seemed to be a little dry, so low and violently bloomed was solved. C. picked up the crumbs of the cake cap, expecting to taste something really fudgy and moist, instead she let out a scream. "It's tasteless, it's tasteless!" Alas, between the both of us, we had neglected to add the substantial amout of sugar, right at the end of the recipe. One of the odd things about the recipe, was that the sugar was added right at the end, with the dry ingredients. Having got to that stage in the recipe, we'd both assumed, incorrectly, that the sugar had already been incorporated and hadn't given it a second thought. 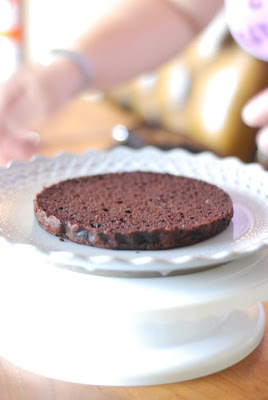 The only good thing about baking mistakes is that if you make them with the right person, gales of laughter ensue. We were already well onto piping the layers with raspberry-flavoured buttercream and it was much too late to cry about spilt milk. Tasting the cake with the buttercream seemed to suggest that the buttercream had more than enough sugar for the both, in fact, as C. corrrectly surmised, people would probably like the cake for the often-quoted reason "it isn't too sweet". 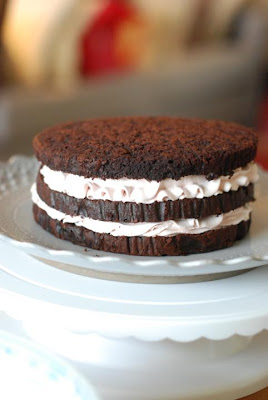 Piping a tomboy cake is not easy and I felt there were insufficient instructions to making it look presentable. Although there was a fair amount written about each layer, there really needed to be more photos that showed in between steps, rather than each layer as completed. As you can see from the photos, we would have done better if we had used a larger star tip, if we had known to only pipe one layer of icing on each cake base and if we'd known better how to smoothen the top surface. You can really only take one shot at doing the top surface and often what happens is that the icing gets pushed out toward the edges of the cake, in fact overflowing the cake surface.

That's how we wound up with the crumbs and smears on one part of the cake (near the top layer). This is a really fiddly cake to ice and doesn't allow any room for mistakes as all the layers are exposed. I also don't know that it's the best chocolate cake that I've eaten but it is pretty good and dense. C. had also tried the hot milk cake and found it quite dry, similarly, this cake was not very moist but it did have a slightly sticky texture and thick crumb, if you like this sort of very typical dark American chocolate cake. 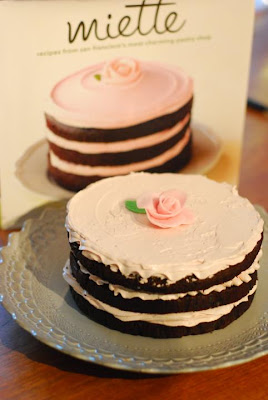 All in all, I'm not sorry I bought the Miette cakebook but I do think it's more of a charming book than it is an instructional one. C. contrasted it to Dorie Greenspan, whose products are quite rustic and not good to look at but which have a great taste and technicality. Also, we weren't sure how much would be omitted, given that Ray is the proprietor of Miette, she might not be able to share all her secrets with readers.
Posted by Weylin at 7:36 PM

ooH! so that's where the tomboy cake came from. it was delish :) thanks for lovely cake and merry evening wey.