Despite being so out of the way, the Pan Pacific Hotel has a rather impressive stable of restaurants catering to a variety of tastes: you have Hai Tien Lo serving high-end Cantonese cuisine, Rang Mahal handling posh Indian food, and Keyaki's dependable Japanese offerings in their adorable rooftop garden. 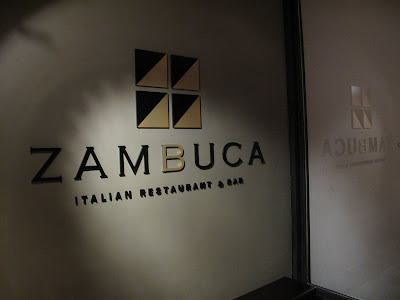 Strangely, however, I don't think I've ever been to Zambuca, a stalwart of the Italian dining scene. 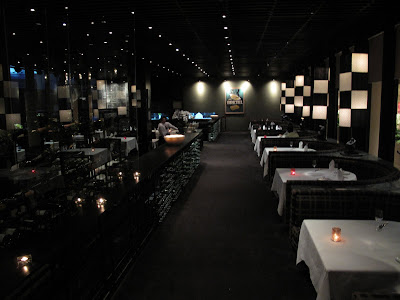 The restaurant is a rather dramatic affair at night, as the liberal use of dark colours throws the pristine white tablecloths (which are illuminated by spotlights) into stark contrast, and suffuses the entire restaurant with an intense, respectful, and indeed almost sepulchral atmosphere. 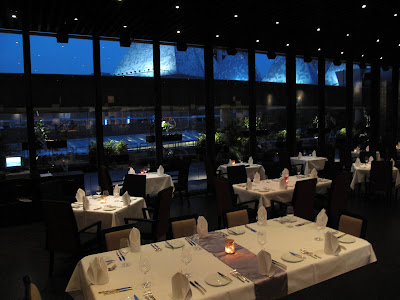 Seated in couches at the right of the dining hall gave us a clear view out into Suntec City, which, for some reason, cast a rather ethereal blue light on its surroundings. 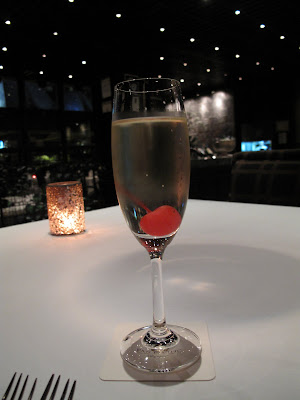 A lovely champagne peach Bellini as an aperitif, and dinner was ready to start. Zambuca is one of those rare restaurants that offers a set menu for dinner, and what is even rarer is that the set menu price can be discounted with the use of appropriate credit cards. Although I cannot now remember how much dinner cost, I do recall thinking at the time that it was surprisingly affordable. 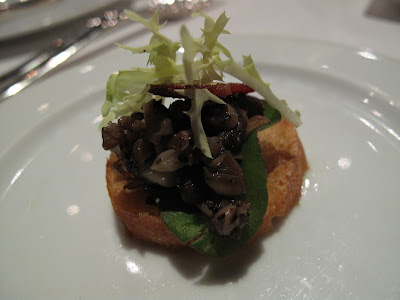 Our amuse bouche was a delightful mushroom-topped crostini, which married the crunchy toast with the slippery, supple mushroom bits in a delectable bite-sized morsel. 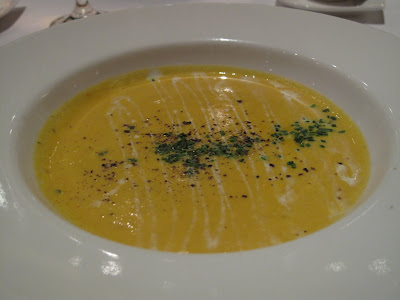 I was under the impression that a waitstaff had told me the soup of the day was "mushroom soup", so I was somewhat surprised to receive a pumpkin soup, but it may well have been that I was not listening very carefully, and in any event the pumpkin soup had a wonderful golden hue and a lovely velvety texture, with just the right amount of natural sweetness, making it an extremely enjoyable first course. 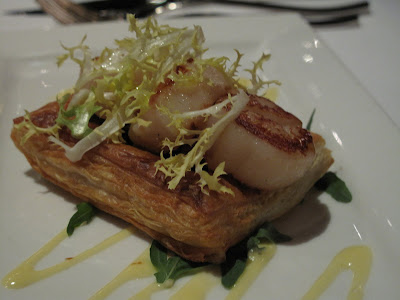 S had a pair of grilled scallops on puff pastry and accompanied by some chicory. The scallops appeared to me to be plump and delectable, and sure enough they were wolfed down without much difficulty. 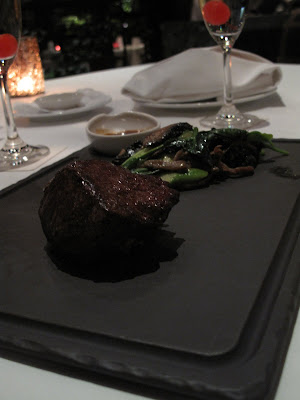 The problem, I find, is that while serving food on slate plates or tablets is visually quite attractive, they make for terrible photos because the dark rock absorbs a great deal of light. Still, I had no complaints with how my tenderloin actually tasted, and the vegetables with which it was paired (some sliced asparagus and wilted spinach) provided sufficiently contrasting flavours and textures to liven up the medium-done steak. 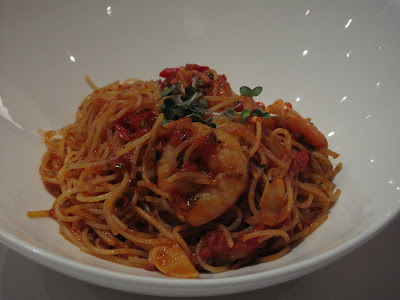 S's prawn capellini looked a little heavy-handed with the tomato sauce, but I suppose this sort of thing is to a large extent a matter of taste - in particular, how much of a taste you have for tomatoes. 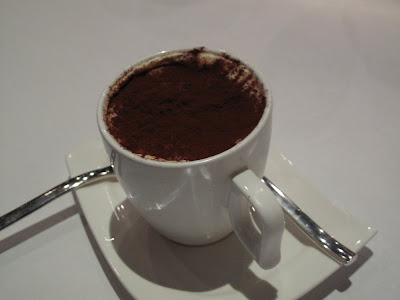 We shared a tiramisu, which no self-respecting Italian restaurant can afford to leave off its menu, but unfortunately I was not particularly impressed with Zambuca's offering: it was rather thick and dry, with very little sponge, so it felt like I was eating a particularly dense clotted cream which had hardened after being left untouched for too long.

Overall, Zambuca serves extremely respectable Italian cuisine in a classy and comfortable setting, and with a fairly unbeatable set dinner, there's really no reason not to come here with friends or loved ones to unwind on a Friday night.