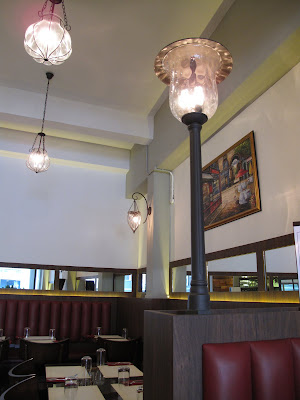 As the 10th year anniversary of 9/11 came and went, I couldn't help recalling what the dining scene was like 10 years ago, and musing to myself that, although there've always been hotel restaurants, it wasn't that long ago that the only place you could generally go for French bistro food was Au Petit Salut at Holland Village. 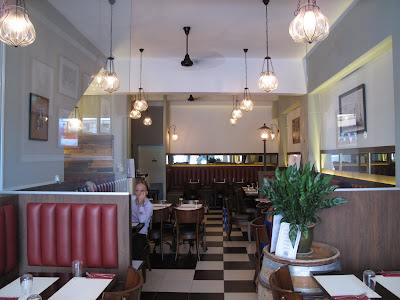 Times have changed since then, and these days you're more likely to find French food in the CBD, as is the case with Taratata Bistrot, a restaurant that's one of the latest editions to Keong Saik Road. Certainly, as you can see, the look is absolutely spot-on, what with the maroon-backed booths, salt-and-pepper tile flooring, and lamps that could pass for being gas-fired, though I'm not entirely sure about the lack of the door; the proprietors may have been trying to go for that Parisian summer feel, but it does get somewhat uncomfortable.

Set lunches are priced at $28 for two courses and $32 for three (including coffee), and the menu changes pretty frequently, but hostess Beatrice is always on hand to explain what's on offer, which, as you'd expect, is classic bistro fare like charcuterie, boeuf bourguignon and cassoulet. In the kitchen are the owners, Philippe Nouzillat and Bertrand Raguin, who are obviously old hands. 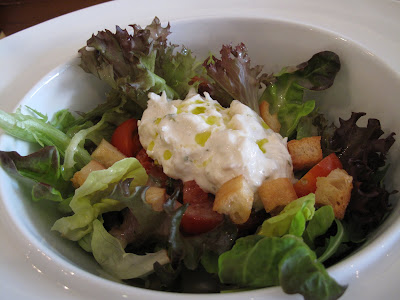 My crab starter salad was a little unexpected; the menu had said something about "stuffed tomato", so I envisioned an enormous heirloom tomato stuffed with fresh crabmeat, and as a result I was disappointed with what I received, as it was essentially a garden salad with some crab mayonnaise, which was resting on rather than stuffing a tomato cross-section. 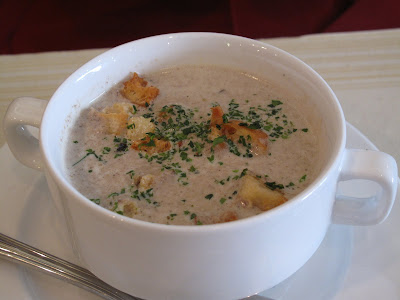 The soup of the day was a mushroom soup, which was quite decent, if a little light-coloured. It is a bit unfortunate that we generally do not get tasty mushrooms in Asia, as it makes it difficult to satisfactorily produce staples like mushroom soup: it's a little bit like trying to create good sushi in Liechtenstein. 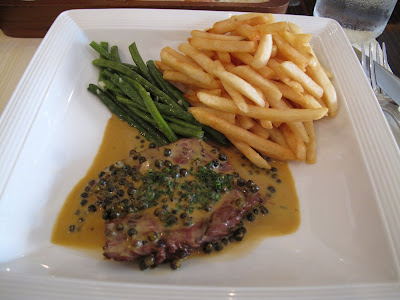 Sadly, I was rather underwhelmed by my main course, a grilled onglet steak served with a Madagascan peppercorn sauce. The steak was rather small, and it was smothered with sauce which contained a great deal of peppercorns, and as a result went from being piquant to excessively peppery quite quickly. The beans were nothing special either, but the fries were actually excellent. 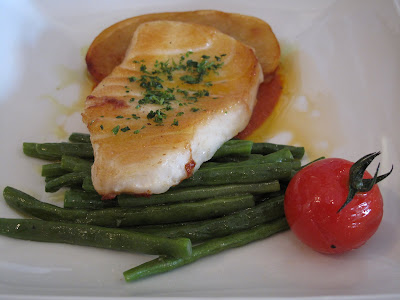 I didn't try the sauteed cod fillet, but it seems the fries don't come with everything, while the beans do. 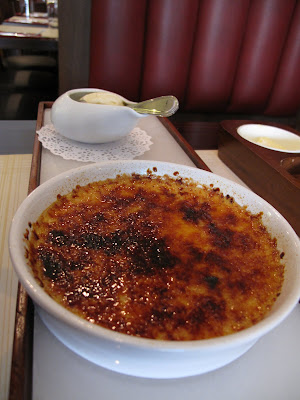 The creme brulee was served in a classically shallow dish, but also rather untraditionally accompanied by vanilla ice cream. Although it looked spectacular when it was first served, with a brilliantly scorched surface, I soon discovered that underneath that attractive crust, the creme brulee was in fact very runny, which is probably the last adjective you want running through your mind when eating a dish with eggs in it. 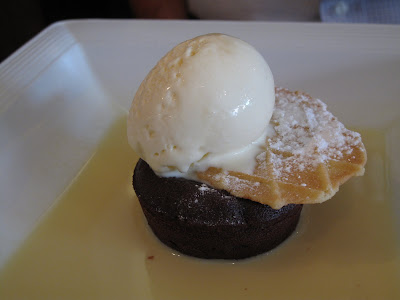 The molten chocolate cake arrived with some luscious vanilla ice cream and an unexpected moat of creme anglaise. The problem, I find, with serving something familiar like warm chocolate cake, is that small errors are instantly magnified by the lens of ubiquity, and as a result, the fact that the caked had been slightly over-baked was instantly recognisable due to the unusual viscosity of the chocolate lava.

Overall, I wasn't all that impressed with what Taratata had to offer. Still, the restaurant is new, and it looks like they're putting a lot of effort into new dinner menus, so we may yet see exciting things from the Nouzillat-Raguin duo. In the meantime, though, it's probably safe to say that the French bistro scene in Singapore is not yet exhausted.