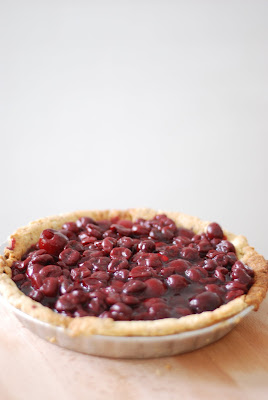 Here we are at the height of Olympic fever and I felt like eating something super-all-american, like Cherry Pie. You know, with a proper lattice and everything, maybe even a Sour Cherry Pie. The prunus avium is the sweet, black cherry, while the prunus cerasus is the sour cherry, which is shaken off its stem early and immediately plunged into water. The sour cherry is less sweet, firmer and is one of the superfoods, that is, aboriginal science has it that they have medicinal properties to cure tummy aches, sore throats, relieve pain and you know, improve your golf handicap. 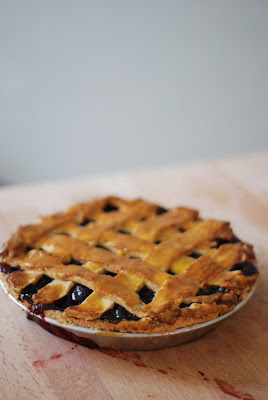 I digress, I had just picked up a cherry pie from an eatery and it was good (with apple pieces and a sugared crust) but not sublime, so I perused some 20 recipes to come up with something better, and again, it makes you wonder how much time you would have spent on sub-par recipes if the internet didn’t exist.

One of my largest concerns was that the filing would be too wet (this tends to happen with even berry pies), as such, I felt that ideally, the recipe would involve cooking the cherries first, to extract and thicken the liquid, instead of having this process happen in the oven, which would wet the dough. However, very few recipes, as you can see from below, actually called for cooking the cherries.

Smitten Kitchen: Stir together the 4 cups/2.5 pounds unpitted cherries, 4 tbsp cornstarch, 2/3 – ¾ cup sugar, 1/8th tsp salt, half a lemon and ¼ tsp almond extract gently together in a large bowl. Spoon filling into pie crust, discarding the majority of the liquid that has pooled in the bowl. Dot the filling with the 1 tbsp bits of cold butter. Bake for 25 min at 400F, then reduce temperature to 350F and bake for 25-30min more. 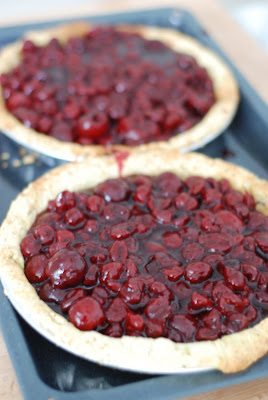 There really wasn't a whole lot of difference between the recipes. The Epicurious recipe will have more liquid from the cherries but then it’s baked somewhat longer. I was most inclined to go with Baking = Love because of her lovely photos, which were posted on the day of my cherry pie craving (what a coincidence, she was watching the Olympics too!)- hers seemed to have the kind of thicker texture that I was after and was a combination of Smitten Kitchen and The Pioneer Woman’s recipes- not hugely different except that the filling sat for 15 minutes which might help to leach out some moisture.

The second concern that I had was that the filling would not be dark almost blackish red that I was after, as some of the blog pictures showed a more vicious or slightly pale filling. I suspect this has to do with the thickening agent used ie. whether it was cornstarch or tapioca flour (as it turned out, it was more about the kind of cherries used).

Colleen’s Best Pie recipe: 2 14oz cans of pie cherries, 1.5 cups sugar, 4 tbsp+2 tsp cornstarch, pinch of salt, 1.2 tsp almond extract, 2 tsp butter. Cook one cup of drained cherry liquid in a heavy saucepan with corn starch, salt and half of the sugar, boil until thickened. Stir in the butter, almond extract and the other half of sugar, then gently fold in drained cherries. Bake 45 min at 375F. 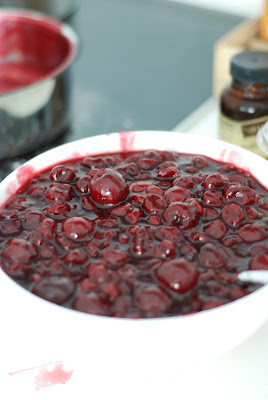 When it comes to crust, I usually use Dorie Greenspan’s All Purpose Crust Dough or Miette’s shortcrust pie dough, so I wasn’t overly concerned. An additional plus is that Greenspan’s pie dough uses ground almonds or hazlenuts, which would allow me to skip the almond essence in the filling itself. The variables in pie dough are usually a combination of a few factors, the use of shortening, the use of cold water and acid like lime juice or vinegar, the mixing process, the resting time and the baking time.

Most of the pie dough recipes will advocate the use of shortening, which I know, I know makes crispier pies but I cannot bring myself to put these hydrogenated, literally, plasticated fats into my food! I use shortening to prevent fondant from sticking to my hands and to moisturize, it smells awful and is truly elastic in nature. I just can’t fathom using it, no matter how superior the taste of the crust. As such, I had to experiment with several different crust recipes, replacing the shortening with butter. Also, and coming back to my first concern, very few of the recipes called for a blind baking of the bottom crust, which I suspected would help with the wetness of the bottem filling layer.

Coleen’s Best Pie: This is essentially a rubbing-in mixture which Coleen claims can be baked without resting. Mix 1 ¾ cups shortening with 4 cups all-purpose flour, mix 2 tbsp sugar, 1 tsp salt, 1 egg, 1 tsp vanilla and ½ cup ice cold water together, until well mixed, then add it to the flour mixture.

In the end, I made one portion of Baking = Love's crust recipe (including the vinegar) and one portion of Dorie Greenspan's All Purpose Pie Crust recipe. I replaced an equal measure of flour with 50 grams of ground pistachios and 30 grams of ground almonds. It may have been the nuts or our humid climate but both doughs were incredibly soft. I added an extra 3/4 cup of flour to the Baking = Love recipe and left the Dorie Greenspan dough alone but in the end, I wound up rolling both the portions together and using the combination to line both pies, which I did bake blind.

In retrospect, first, I didn't need to worry about the soft dough but it should bake directly from the fridge, to the oven. Also, it is typical for the dough to melt in the oven and then reform in a buttery crusty pie dough. If you are uncomfortable with such a soft dough, you can add flour as I did but it does toughen the dough. For me, this was not a problem, I liked that the dough could hold it's shape a bit better and add some crunch to the pie. When you bake your pie lattice, remember to brush it with egg yolk and dust it with granulated sugar for that finished touch!

The last problem, as pertains to Singapore, is where to get sour cherries and whether to use all sour cherries, or some sweet and some sour. Unfortunately, unlike in the US you can’t get fresh sour cherries. You can get them at Phoon Huat for $10/kg, however, if you have issues with the quality of Phoon Huat’s fruit, you can get them at the German Marketplace along Bukit Timah or Tierney’s at Serene Center. You can also buy them for $18/1kg at Delicia’s online gourmet delivery, the only issue is that these are small red sour cherries, which to be honest, don’t look like the ones I saw in the blogs.

In the end, I used a mixture of half black, fresh, sweet cherries (be careful when you de-pit or halve them if you are uncertain, I found three cherry pits in my pie despite my best attempts) and half frozen sour red morello cherries. I strained out the juice from the frozen cherries and cooked that with the fresh cherries. I then added 1 cup sugar, ½ cup brown sugar, 1 tsp cinnamon, 4 tbsp cornstach, 1 tsp vanilla extract and stirred till thickened, then adding the rest of the cherries (as per Miz Helen's recipe). I found that this combination produced a pie that had a slightly sour but still mostly sweet and it also simmered into a thick black, rather than red, filling, as I was after. This pie is best eaten warmed and with vanilla ice cream- easy as pie!

Hi there, just wondering where did you buy your morello cherry?

Hi there, just wondering where did you buy the morello cherry from?

Hi, you can get them at Phoon Huat, flash frozen.