Esquina had been around a good many months before I’d heard of it and for awhile, I avoided the place because I’m not a fan of tapas, particularly cold tapas. What a mistake! While it advertises itself as a modern tapas bar, the food is much more in the style of small plates, inspired by Spanish cuisine. The restaurant is helmed by Jason Atherton, a protégé of Gordon Ramsey, but I have never seen him at the restaurant, it is usually headed by striking but moody executive chef Andrew Welsh. 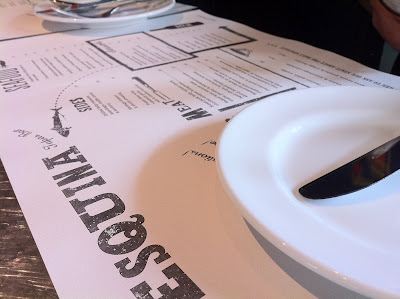 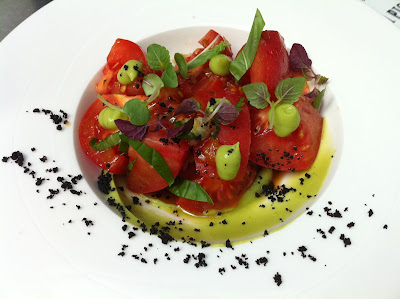 There is a deceptively curated menu, with many choices in the starters, entrees and seafoods sections. Over the times that I’ve been there, there have been numerous changes to the menu of select items but some of the signature items like the heirloom tomatoes and salt and pepper squid remain the same. 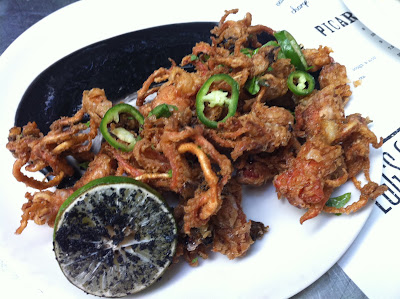 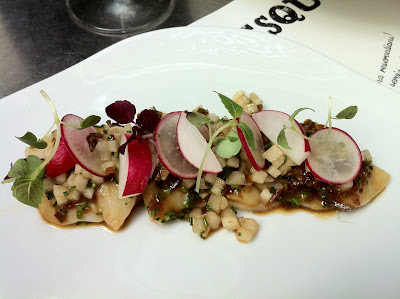 The bar itself is tiny, about 18 seats along a narrow counter and a few single high tables. The atmosphere is hot and languishing, in a rather cool, evocative way. Just stepping in, I could see that this place was going to do well. It had that indescribable joie de vivre of places that ooze confidence, consistent style and ‘done-ness’, the kind of places that people enjoy to see and be seen at. The décor was simple and yet deliberate, the bar stools are uncomfortable steel bike seats, welded in beautifully heavy, industrial plate and bolts. The bar was set with simple paper placemat menus and water was free; they hardly push you to buy any drinks (but in the evenings, the drinks flow freely and the bar is stacked three-deep with a 45 minute wait). This is food at its finest but not by any stretch of the imagination, a fine-dining establishment.

On the first visit, I ordered the tuna tartar and the salt and pepper squid as two of the starters. The tartar was fresh but not extraordinary, the squid was one of the best I’ve had, tart, crisp, juicy and bursting with the flavour of the lime and crushed, dehydrated black beans. Over subsequent visits, I also had the heirloom tomatoes, which I really enjoyed. On one occasion, they were the multi-coloured hue of those expensive tri-coloured tomatoes, all green with watermelon stripes and yellow and dark kumatos, those were amazing. The second time, they were regular albeit premium juicy tomatoes and still good, drizzled with a simple white wine vinegar, olive oil and served cold. 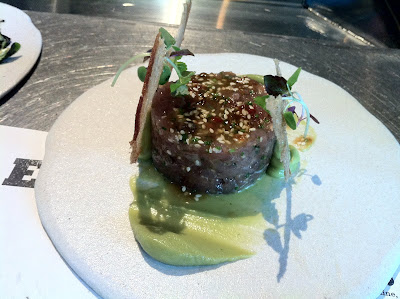 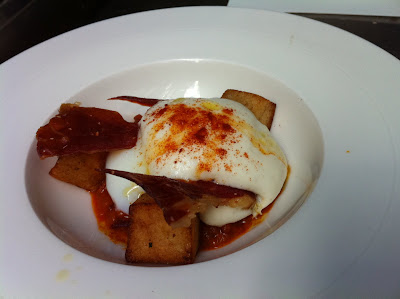 The other starters I’ve had are the Scallop and radish cerviche, a soothing mix of briney freshness and translucent radish and a salad of warm romaine lettuce, anchovies and hard cheese, wilted through with balsamic vinegar. 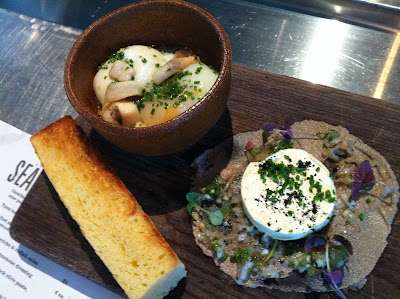 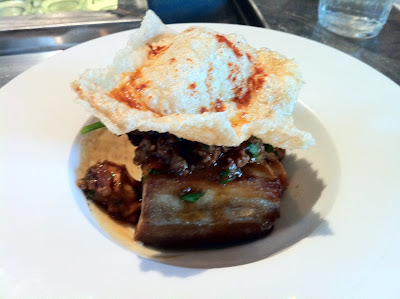 For the mains, I’ve tried the bone marrow which was delicious and their two specialties, which are the crispy pork belly and wagyu beef sliders. My opinion was that they were good, but not out of this world, the crispy pork belly didn’t have much on the Asian version and it wasn’t large, the sliders were juicy but tasted blander than I would have expected for wagyu. In terms of prettiness and delicacy or unexpectedness of tastes, they definitely lost out to their entrée cousins. Another restaurant specialty is the slow cooked egg, this is a bit like the 2 minute, soft-boiled egg, on one of the visits, it was served with toast and black bean paste and brie, on another, it was served atop crispy potato bravas and a rich tomato cassoulet-type stew. 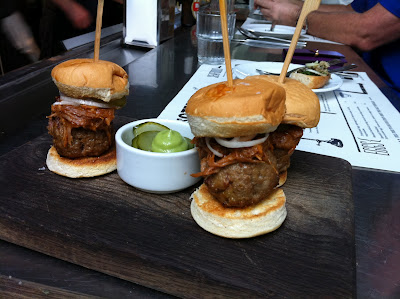 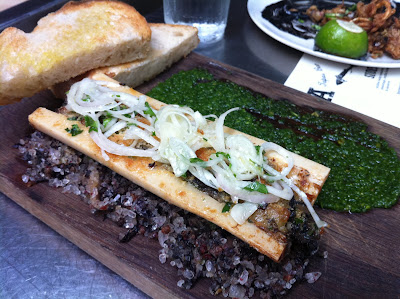 The dessert menu is very short, usually just five items but they are quite good, my favourite is the warmed pistachio cake with raspberry and ice cream and the other two that I tried were the chocolate mousse with chocolate soil and the caramelized pineapple with sorbet, to my mind, the latter was a little too simple and insubstantial and I feel the dessert menu could be much, much improved and is probably the weakest part of the meal.

The prices are not hefty, about $8-12 for a starter and $20-24 for a main but these are really small plates so I don’t know that the men wouldn’t find it on the pricey side; I also find the food a little salty. I appreciate that they don’t charge for water and concentrate purely on honest food, cooking and ingredients. It really is a place for people serious about taste and serious about eating, so it will win over even the more particularly critics. The restaurant has a no-reservations policy but lunch seats are much easier than dinner, if you turn up at 11.45-12noon.