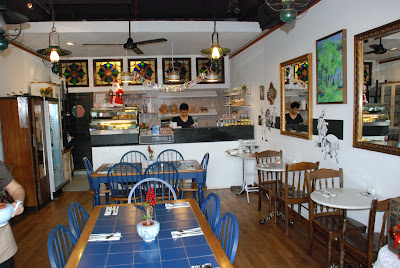 The day after Christmas, my dad came up with an edict that we were all going out for lunch. Where? We asked. This place I found, he replied.

Curious and to be honest, somewhat sceptical, my brother and I got dressed and trotted out to Cluny Court, where the place my dad had read about was Karma Kettle and Rhapsody, a little British-Indian styled cafe tucked in the bottom of a shophouse along the Cluny cluster, a few doors down from Awfully Chocolate and Cold Storage.

The set-up is cute, picnic tables sit outside the white cottage windows and the interior is decorated with wall sketches and paintings reminiscent of the old English Enid Blyton storybooks and hand-painted signs touting the goodness of tea. 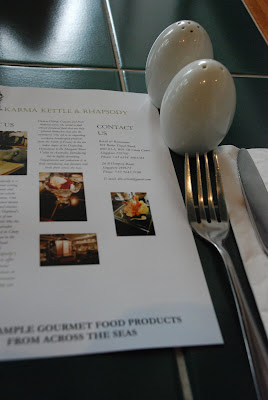 First off, I must say that Boxing Day is a rather abysmal time to be visiting any restaurant as you're invaribly served a mish-mesh of leftover turkey meat by curt waiters. That being said, I was charmed by this place, their friendly entreprenuerial owners from Darjeeling and their helpful if slightly inexperienced Nepalese staff. 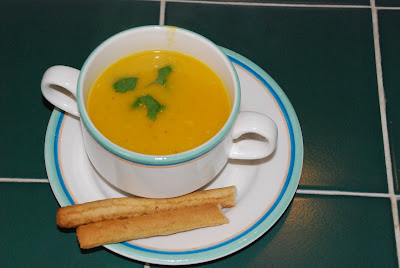 The young couple, Dhiraj Arora and his wife Preeti, have a background in hospitality and have set up shop in Singapore with this little cafe and also a large establishment in Dempsey (the Dempsey outlet has just European food). They are very brave. I'm not sure the casual cafe segment is where I would choose to set up in Singapore, especially in Indian food, given that you often get sandwiched between the food centers and the more upscale ambience eateries. There is also an associated shop nearby where they purport to sell gourmet items which have struck them on their travels and overseas adventures. 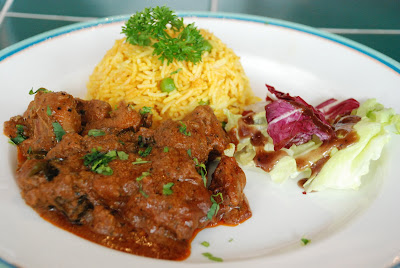 Colin had a pumpkin soup, which while a little watery, had a good spicey taste to it. He also had a lamb Rojan Josh of sorts. My mom had a Chicken Tikka Masala and I had a Vegetable Curry. 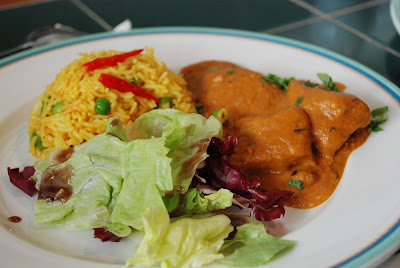 I really enjoyed these dishes. The cooking was light and deft and the freshness of the vegetarian meal revived me after the heavy eating of the Christmas season. 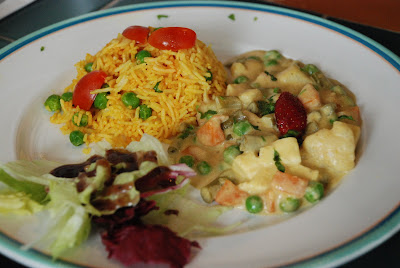 My dad, to the surprise of all, ordered the English Lavender Chicken ($15.50) served with herb rice and asparagus, primarily because he didn't like the idea that any of us should order the same thing. 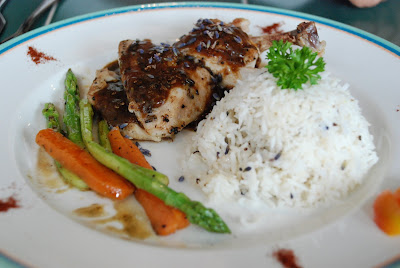 The idea of lavender with savoury chicken sounds a bit like mixing English soap with meat but these pan-fried and herb-reduced chicken breasts were tender and juicy. I must say that the taste of the generously studded lavender sauce is still quite unintuitive but it is unique and rather enjoyable, with the relatively coarse grains of herb rice. 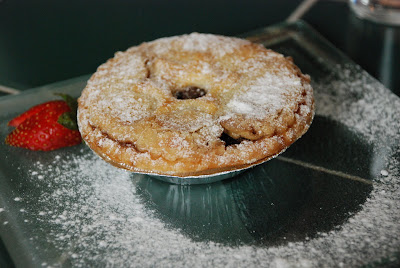 For dessert, we had the mince pie and chai lattes. Their chai is a bit milky weak but the spice content is incredibly strong! The mince pie was sadly, really very small for its price. Their signature dessert, the only one that's really listed on the menu, is the Eton Mess features a sweet combination of strawberries, meringue, vanilla sponge and marmalade but it sounded overpoweringly sweet for my mom.

The bill for four people, on a very light, one-dish lunch, came up to more than $100 and this is probably the problem with the premise of this restaurant. I liked it and I wish the owners nothing but the best, but how many people in Singapore are going to come and pay $17 for a small plate of vegetable curry rice? Or $8 for little bowls of soup or small mince pies? It just isn't value-for-money, in a food society that is very value, or else status concious. I also didn't really like the idea of sitting by the noise pollution of bukit timah road (which from my travels in India I know is much more acceptable than it is here), nor the kitschy decorations. though I thought the food pretty palatable, if pricey.