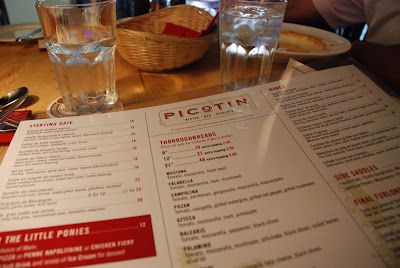 Dad strikes again, he is on a roll. I join him and Colin for lunch at his newest find, a quaint french bistro called Picotin. The restaurant is accesible from Turf City Road, near the Eng Neo turnoff to the Pan Island Expressway and the entrance is marked by a jaunty lit balloon. The actual turning into the restaurant is quite squeezy (I came within inches of a lovely Ferrari parked on the side, yikes!) and the owners have vowed to get two valets for the convenience of guests. 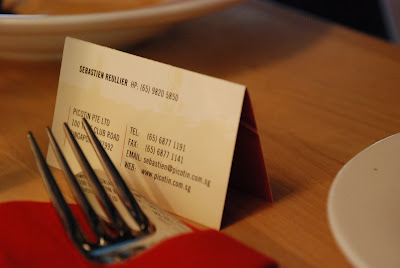 Picotin is a collection of stables that have been rejuvenated by Sebastien of Greenwood's Sebastien. I believe this is a joint venture with Emmanuel Stroobant from Saint Pierre who runs the store appending the restaurant, selling breads, gourmet goods and deli foodstuffs from his brand Archangel. 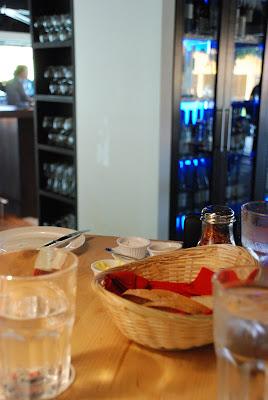 The style is french modern and the kitsch factor is red napkins, high polished wood tables, a pizza grill and horse-themed menu items. Oh yes and the two additional points for being within a near radius to my house. 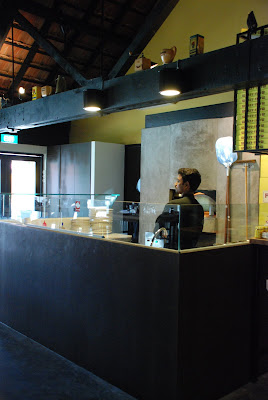 This is their pizza grill, which I believe is actually not a wood fire but with an interesting contraption that trickles a roaring flame out from the sides of the oven, heating the clay floor and sides. 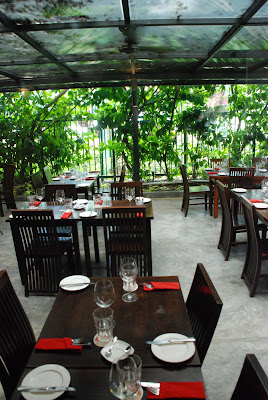 They also have a sizeable outdoor seating area that's at least as big as the indoor part and they were elaborating plans to push back the verendah at the back to create a better garden vista and more parking space. 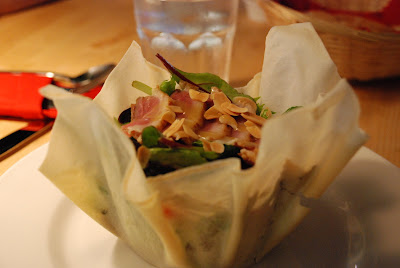 This was the duck salad starter I had. I would have preferred a lush flaky pastry basket and the filo was a bit...hard but the duck meat was tender and soft and made a good contrast to the citrusy salad. We also had a lobster bisque which wasn't steaming hot, which caused it to be a bit fishy and rather thin in flavour. It was also pretty unsubstantial for $16. 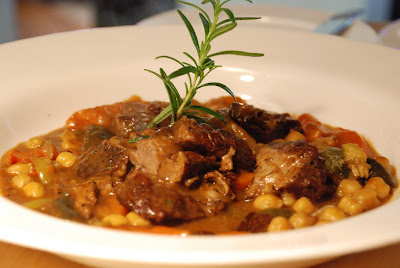 Colin had the lamb tagine, which was good but much weaker than the proper Moroccon ones that he's experienced before. It came served with a bowl of cous cous. 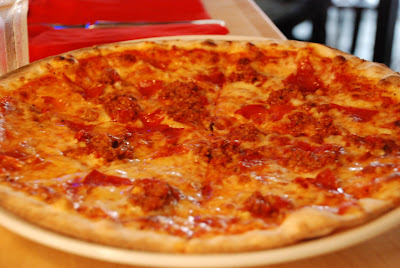 We shared two pizzas, a ham and cheese and a meat pizza. While maybe not the best I've ever eaten, they were pretty good and I liked how the crust was thin but not too cracker-like and the flavour was very strong. Good cheese too and piping hot when it comes out of the oven. 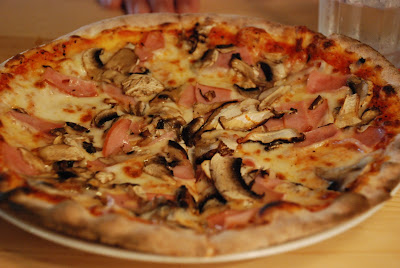 My recommendation would also be for the meat pizzas though you might like to try the vegetarian options, like the palomino version which had artichokes, olives, mushrooms and tomatoes. 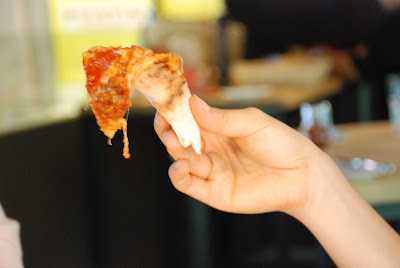 On seperate occasions, we went back and tried their duck confit (not dry nor crispy enough) and their beef short rib (excellent, with a giant bone poking out of the soft braised meat). The atmosphere is very convival and yet not unbearably noisy, such that even our mature guests had a good time, although they did complain about the discomfort of the high seats. 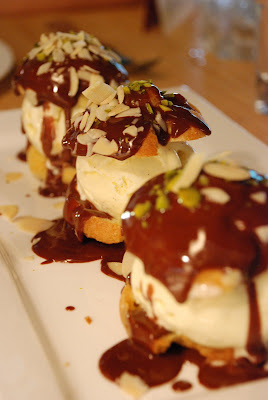 The desserts are the usual creme brulees and tarte tartins but the one standout is really their profiteroles, which are generously stacked with vanilla ice cream. My dad's favourite dessert I now think is profiteroles, so I've tried, oh every one at every restaurant in Singapore I imagine. By comparison, these are ice cream profiteroles, not angelica cream profiteroles like those at Cicada (though those were good too) and they are similar to the ones at PS Cafe, except supersized and they are both better than the chocolate sauce-drowned little balls at Au Petit Salut.

Go have a hangout at this cute little manger! It's not cheap though and more a fun drinks and pizza place than a location for a romantic dinner. You should expect to pay about $19 for a pizza and $28 for a meat main. Desserts are about $8.