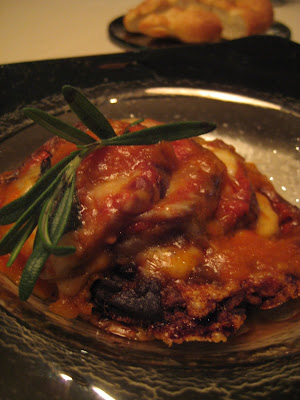 After CH's glowing review of the restaurant, I was interested to try out Forlino, the new kid on the One Fullerton block. It's on the second floor, an ingenious use of space. I discovered a Business Times Geoffrey Eu review that was slightly less glowing and thus prepared, convinced a group of visitors that we should go to try it out.

The doorway is rather strange, it's basically a hole in the wall next to where the disco used to be and up a rather carpark-looking staircase, you come to a carpetted entrance on the mezzanine level. You then walk up another flight of steps, where in an attempt to be posh, they've covered the walls with robin egg blue paper and steel grey stucco, the floors with a black and white diamond palazzo marble and the sitting area with a loud, bright red leather tufted sofa.

It's an interesting effect, I assume they will be removing all that industrial-type frontage as the building matures and the view of the casino and waterfront come up from the current vista of cranes. Right now, with the blue walls and large lamp-lights, they look like they stole the look from Novus, at the National Musuem. 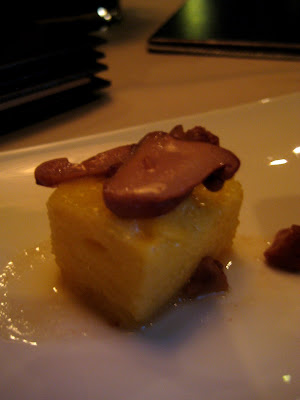 I was a bit nervous about trying this week-old restaurant with discerning guests because of the food, the service, the prices, oh, everything! But my fears were largely unfounded. There were no precious moments and server what-not-to-say clips as I've experienced lately at new restaurants like Pietro Santo "We're washing the cutlery as fast as we can!" or The White Rabbit "There are no specials. No, really, (server glares) there are No Specials". 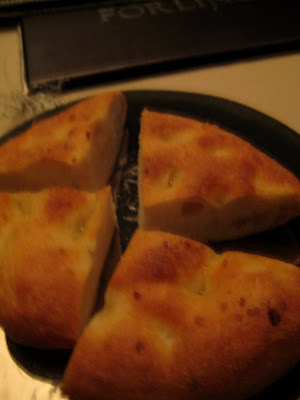 Before I go on on that, I should mention that the light was quite dismal and I'm afraid so are the photos. Let me start with the food before you get bored. The amuse bouche was a polenta cake with mushrooms. This was good and grainy, though too oily for my taste. The bread was home-made by the chef's mother and it was fantastic but it was also sweating olive oil. It was saved by it's warmth and softness though, I don't like oil but I'd still say it was very good.

I immediately saw what some reviewers had pointed out as curious, that for a family-run restaurant, there was an incredible lot of formality to the whole place, not just in the OTT decor but for example, they brought a plate with individually rolled napkins, the way most restaurants do with breadrolls or Singapore Airlines does with hot towels. There were also too many suited Italian people kept running in and out, saying Buon Giorno incredibly servile-ly, I didn't quite see the point of that.

There seemed too many service staff milling around and when I opened the menu and rested it, opened, on the table, the server swooped over, picked up the menu from Right In Front of Me and folded it closed and put it back in front of me. Hello, darling, too obvious... The other thing they did, which I feel they should refrain from, is when the menus were rested near shared appetizers, they hovered round us, silently shifting our place settings and packing up the menus like we were young children. 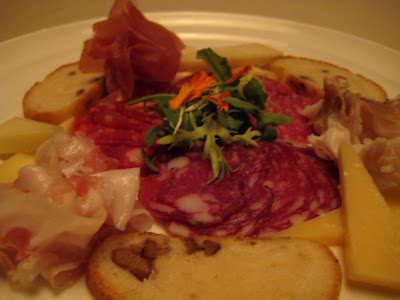 Other than that, I thought the service was very good and very communicative. They get extra points for one, pointing out that two of our appetizers were similar and we might want to consider another one, two, being able to point out the most popular pasta (they caught that I said most popular, not their recommendation for the best, which I hardly ever expect an honest answer to) and three, turning up the light when they spotted a camera on the table. 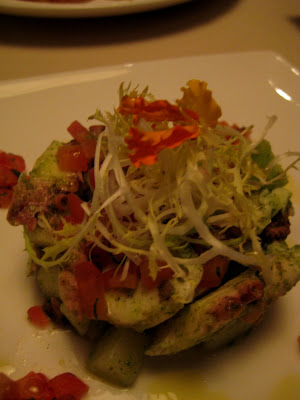 The shared appetizers were the baby octopus salad, the mixed cheese and cured meats plate and the eggplant and mozzarella bake. The appetizers are quite pricey and average $24 in price but they were good. I felt the charcuterie was a bit skimpy but my friends seemed to lap it all up, although one dissolved in consternation when she realized what she was eating was not cheese but fatty cullatello ham.

The baby octopus salad was very good, fresh and chewy but it would have been better had it been warmer, as it was, it was a rather room temperature, which didn't bring out the full flavour of the baby octopus. They weren't sweet enough to make the salad really kick. The eggplant and mozzarella bake was excellent. I don't usually like eggplant but I'd be happy to have the recipe to this dish, it was warm and comforting. 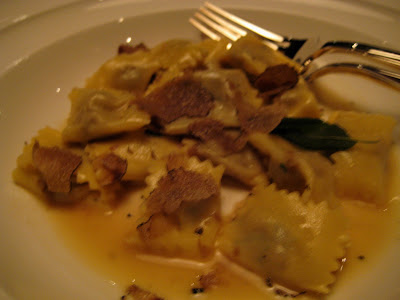 We wanted to try the pastas, so we had the veal ravioli with truffle and the duck tagietelle with foie gras. A word on both, they were alright but they were not as mind-blowing as I had expected, especially the first one, where the veal inside the ravioli had gone cold and the sauce was thin and strange. 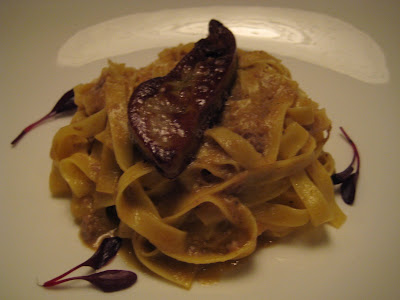 The second was much better, although given the rich sauce that already accompanied the pasta, I would have prefered a lighter, vegetable accompaniment, rather than foie gras that while enjoyable, was a bit overfried and dry, rather than plump, so it didn't quite achieve it's effect. The sauce for the duck pasta was great though and I'd still order the dish. 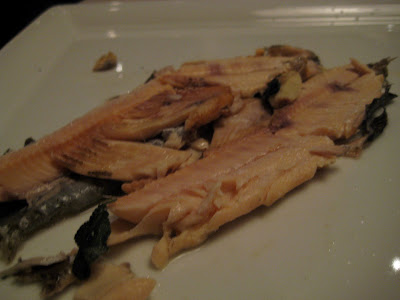 There was a "hmmm" moment in the mains and that was the fish. As you can clearly see from the photo of the trout, it was incredibly skinny and didn't even look appetizing. It was to the credit of my colleague that he picked through it anyway but like The White Rabbit, Forlini's seems to falter a little on the fish. 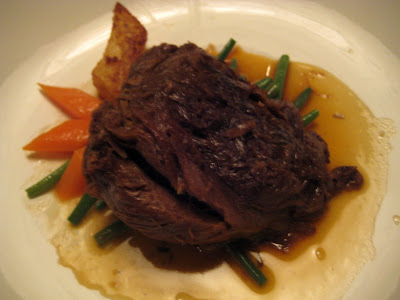 The other meats were a braised veal which was a bit dry and the roast pork and lamb chops. 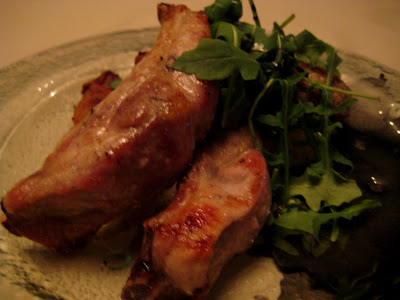 The pork was juicy and well glazed and the lamb chops surprised by being coated in batter and fried, when I think we were expecting them to be baked. Still, they were warm and tender inside their covering, so they were pleased on that side of the table. The mains average about $42 although the pastas are more like $28. 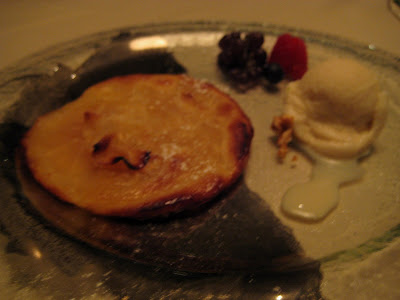 The desserts for me were the crowning glory and one knows this does not get said a lot about Italian restaurants. We had the apple tart, so-called the apple streudal, which was excellent. It's a pity it was over so fast, given how thin it was but the flavour and the taste really was lovely. 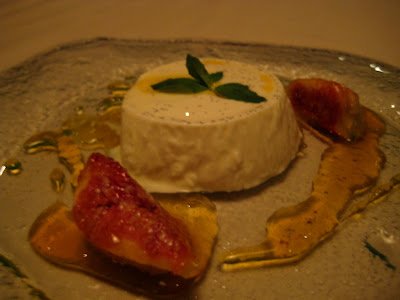 We also had a panna cotta which though thick was soft and lucious, a tart of fruit and gelato sandwiched between thin biscuit and a raspberry tart filled with raspberries and custard that really did blow me away. 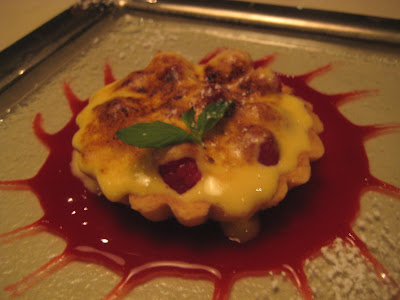 The raspberry tart was slightly sweet but the pairing and the gentleness of the tart texture made it the best dessert I've had in awhile. 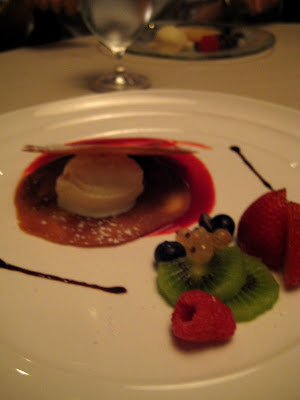 We finished with complementary petit fours, pineapple-like tarts that were pretty average and dry, incredible merangue sandwiched with cream and a wonderful soft chocolate, which tastes home-made, in these cocoa-coated pulls. 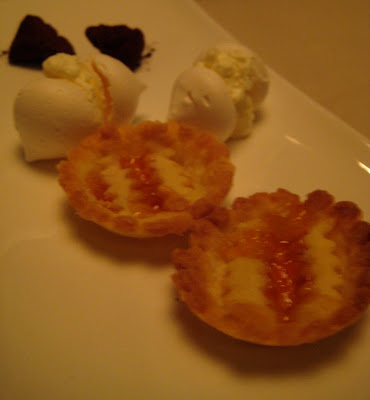 Two out of three were hands-down wonderful, which kind of characterises the meal. Overall, we were very pleased and impressed. I think the formality may turn off quite a lot of casual diners and the prices are a little steep to come back here often but I'd like to.