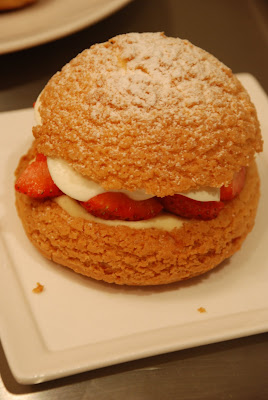 I am always asked if I attend cooking classes and the answer is, rarely but yes, from time to time, when I find a dish or item that I want to take instruction in, or perfect. The last two classes I attended were Chef Pang's Choux Pastry class in Canele and at Shermay's cooking school in Chip Bee Gardens. My most recent class there was with Joycelyn Shu, the author of the lovely food blog, Kuidaore. 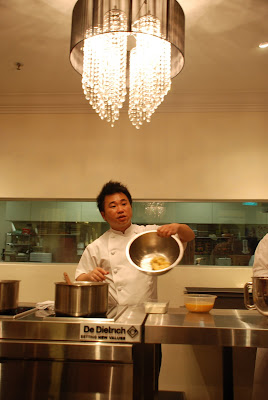 If you read the blurbs, you'll know that Chef Pang Kok Keong was a student at SHATEC (the Singapore hotelling school) and worked at Miachealangelo's, the now defunct Salut, Baker's Inn and interned at the Totel Pasteleria in Spain. 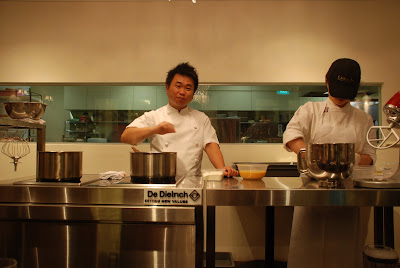 He then worked for Ritz Carlton, the Hilton Hotel and became subsequently, the executive pastry chef for the Les Amis Group and the operator behind the Canele Patisserie. He has been nominated and won numerous awards for both cold and hot cooking. Shermay Lee, on the other hand, is the cousin of our current prime minister and an investment-banker-turned award winning cookbook author, having represented Singapore and won awards at a number of international competitions. 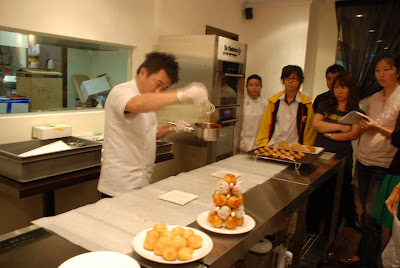 Both places run relatively small classes, although Canale's classes are smaller at 20people per class. (Joycelyn's classes at Shermay's are small but some other guest chefs run larger classes). Both are about the same price, although Shermay cooking school classes can be more expensive (or less, depending on the recipes and the teacher, while Canale's is a flat $120) they are also at least an hour longer. Generally I found the classes at Shemay's more interactive, although Chef Pang did encourage us to stand up and view the contents of the bowls. 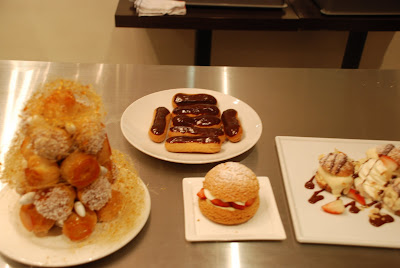 I guess the thing about Canale's classes is that there isn't a dedicated classroom, rather it's a cordoned off area of the store with a standing island stove. Strangely though, while there is ample chandelier-try, they did not put in any mirrors either directly on top or above but behind the chef, so it makes it pretty much impossible for the seated audience to see what is going on. 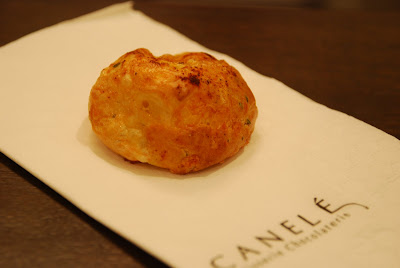 The main difference is probably two-fold. The first is the audience, Shermay's has a reputation for being a tai-tai hangout, that is, supermoms who lunch and bond over beautiful cookies, or ladies who lunch and send their maids to cooking school. The reality is more that there are a lot of young women in the class, most working but perhaps many on their way to a marriage of luxury. 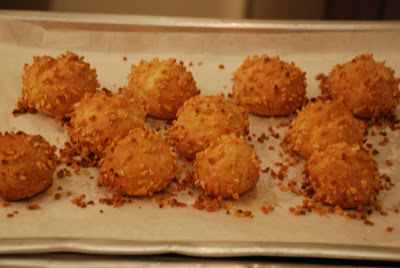 It's not uncommon for people to stroll in looking immaculate in ready-to-wear that have strange names like Victor and Rolf, 3.1 Phillip Lim and Alessandro Dell Acqua and carrying leather bags more gorgeous than their clothing. If people could cook in Manolos, this would be the place and the way. Nobody asks whether Grand Marnier is "orange liquor" and while not everyone pipes straight, they all know love decorated cupcakes. Nobody asks if they can make durian versions of what we are learning. 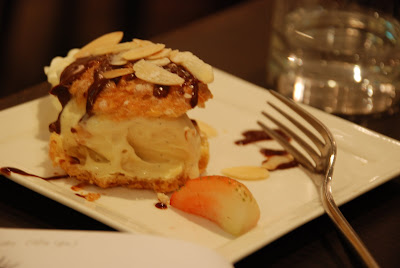 The Canale class, by contrast, was the weirdest mix of people I've come across of late. I was amazed to find that secondary school students will pay so much for cooking classes and sure, there were the requisite young women aspiring to domesticity but there were an awful lot of old aunties as well who seemed to have trouble following an English syllabus. How do you spell Gruyere? Gee- AHH rer- U- whyer- eeAHH rer.... It didn't bother me, as much I thought it was great that they were trying to upgrade their skills. But why learn recipes like this when you don't like cream and cheese and want to infuse them with durian? 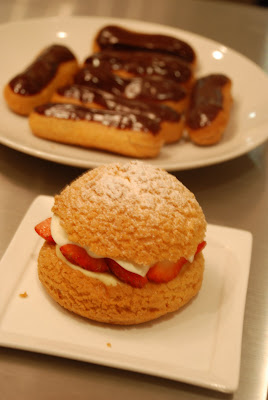 In some sense, it makes a lot of sense. Canale is a patisserie, people of all walks of life get seduced by chocolate and refined pastry. Shermay's is a dedicated cooking school, on the second floor of a thin residential shophouse. To Chef Pang's credit, he kept the class flowing quickly and smoothly, incorporating both the air from the high-falutin British accents and the ackward questions about items already in the recipe. 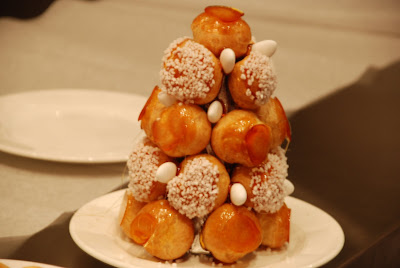 In Chef Pang's class, we were taught cheese gruyere puffs and larger biscuit-crusted puffs, filled with grand marnier pastry cream, strawberries and chantilly cream. We also learnt chocolate eclairs and the crocombouque, which was the highlight of the class.

The second difference is thus the chefs. Chef Pang may be a brilliant chef but upon first sight, he looks a little like a Phua Chu Kang. Wait, make that a hungover Phua Chu Kang. Before the class really started to liven up, he was pretty deadly in his monotone about this much flour into this much sugar. 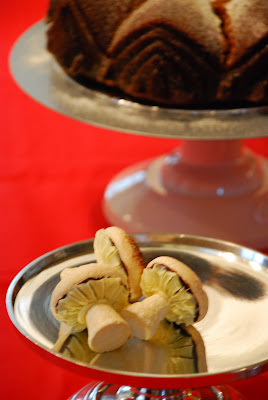 The excitement level was probably below what was caused by his multiple earrings and thick metal chain clipped to his belt. A class at Shermay's though, is a briskly perky affair, it starts with a Good Afternoon Everyone and is buzzing with Gryphon teawater and the sound of people buying things and watching Joycelyn ease her way around the kitchen in a slim black apron and gorgeous bright green jade stud earrings. It has less to do, I suspect, with looks as it has the level of preparation.

When I called up for the class at Canale, I was given a brief run-down of what we would be taught. When I enquired about future lessons, I was told it was Tarts in October and Christmas in November. 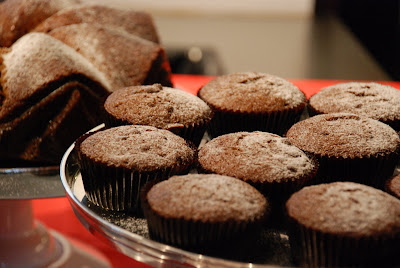 I've seen Joycelyn before a class. She is activity, merticulousness and anxiety personified. She is one of the only bloggers I know who has as good pictures of her baking process, as her end result. In her class, you are blanketed with notations and helpful tips.

There are "extra" sections and "variation" segments and detailed page instructions on how to pipe, roll, smoothen and dot. Everything needed is placed by her, Shermay, or one of their kitchen hands on trays and each demonstration is exact and prompt.

In this class, we were learning to make meringue kisses and fruit-filled meringue cups, sticky toffee bundts and mini-cakes, gingerbread cupcakes and hot and cold chocolate pudding. The class moved seamlessly and the steps listed in the recipe packs were more than coherant, they were almost exhaustive. However, this left Joycelyn free and able to point out the finer details and tips to achieving a palatable and presentable product. 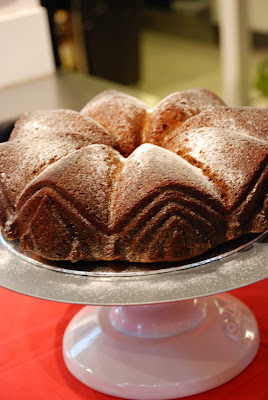 Chef Pang's process seemed equally fool-proof but it's clear that his minions are not as well-trained. The recipe reads Flour- 100g, Cream- 100g. Well, what flour, cake flour, plain flour and what cream? Joycelyn's would probably read something like President Whipping Cream (28% fat, available at Cold Storage or Phoon Huat, do not use thickened cream as it contains gelatin)- 100g and have some note on the consistency of the mixture pre and post adding the cream.

Several times, Chef Pang would look up? Then have to call into the kitchen for the chantilly cream, or,  I don't have enough choux pastry here for one whole recipe. The variations are listed as seperate recipes in the instruction pack. 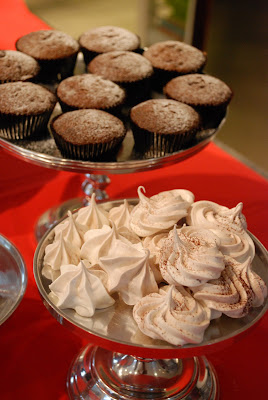 Not, at the end of the day, that that really matters. The funny thing is, well, Chef Pang is more funny. Usually, the guest chef's at Shermay's find it difficult to lift a laugh out of their smiling audience. But Chef Pang gets a lot of laughs out of his dull mob.

When one lady comments (frequently) that the mixture smells too milky and that it is 'gelat' (local lingo for 'too rich'), Chef Pang takes it in stride and says, but if you really did use water, it wouldn't taste as good but yes, you can use soya milk!

Strangely, Joycelyn would probably be the first to suggest soya milk in her own recipes but Chef Pang takes a more unapologetic view toward trivialities. Later, when demonstrating a crocombouche, he says slyly, too bad you can't make it of durian.... And then riffs, durian, also very gelat hor? He is off-the-cuff and unexpected, sometimes staring down questions and saying, literally, I Donch know! To which he adds, I've always done it this way, I've never tried that, maybe it will work? 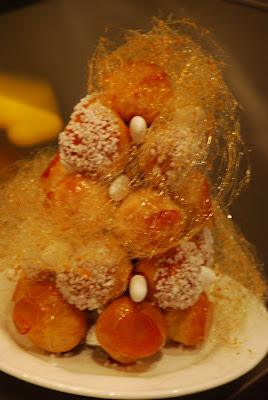 Their results were both undeniable in the class. In Chef Pang's class, I was struck by the crocombouque, which is something that can be made for Christmas or a party. It is a cone of profiteroles that is stuck together with caramel and wrapped in a beautiful delicate coat of spun sugar, the only item that really showed off Chef Pang's magic fingers with sugar art. 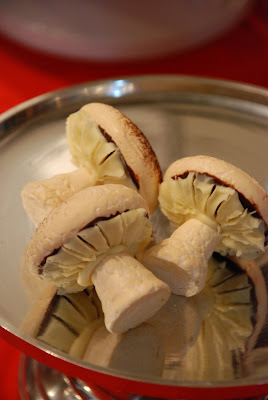 In Joycelyn's class, I was bowled over by the mini toffee bundts and the meringue mushrooms. Who could fail to be charmed by these life-like pieces, perfect for decorating the top of a classy chocolate birthday cake?

Of course, the proof is in the making. A week later, as a result of the vague directions sheet though, of course, I could not remember the details on what Chef Pang's ingredients specifically were. I had the vague notion that the consistency of some processes were not quite right but having made them over several times, I had forgotten what they initially looked like. So-far, my two attempts at cheese gruyeres have been entirely unsuccessful. Joycelyn's sticky toffee date bundt, on the other hand, though arguably an easier recipe, worked well for me on the first try and I was confident enough to try it as a birthday cake for a friend's party.

On the other hand, having written to Chef Pang about the lovely chocolate filling in the eclairs at Dalloyau in Paris and he was gracious enough to have replied with a recipe for a thicker, richer chocolate cream, so if I ever do get my choux pastry to rise, I can make a world-class product!
Posted by Weylin at 4:44 PM