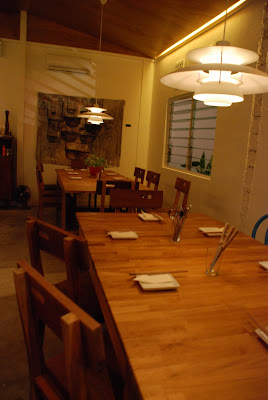 I always marvel at owner-run restaurants, I like how they are not souless like all these trendy, make-up-a-scene places. But I don't understand how the owners can deal with the daily runs of operations, staff management and set-up. Don't get me wrong. I love cooking, I love food, I love interior design. But I think running my own place would squeeze me dry of that love. 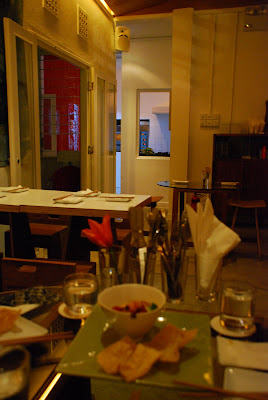 This is a charming place near my home, run by two friends, Sharon and Javier. The setting is coolly and unapolegetically homely and the menu is full of comforting, well-executed dishes. The name is rather strange, given that it invokes the Raw Food movement but there is nothing really raw about their food. Apparently, it refers to the look and image of the building and restaurant. 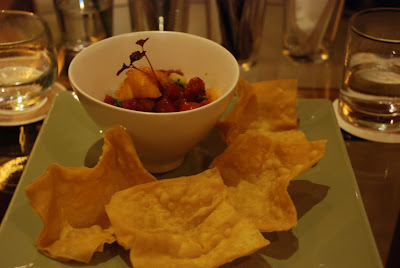 There is a definite flair to their cooking and presentation. I brought cousin C. here to try their specialties.

The first dish we had was the Mango Ahi Tuna Poke with Wanton Chips ($15). For the uninitiated, ahi poke is a Hawaiian dish made from raw sashimi cubes, cucumber and drizzled through with sesame, soy and wasabi. I ate this straight out of the supermarket container at M's house in Maui, it was that fresh and good and then she had to drive me back to buy another big, spicy ol' tub for the guests! 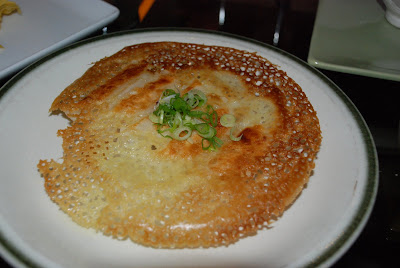 The second dish was the UFO gyoza ($10), so named because the fritter part of the dumpling had been poured over all the dumplings, creating a batter freize that crackled lightly when you snapped your dumpling way from the pile. Dumplings are always such comfort food, you can't really go wrong, these were very tasty.

On a second trip to this place, I ordered the salt and pepper squid ($8) which were addictively excellent. I would rock out on the appetizers, perhaps more than the mains, if I were to visit again. 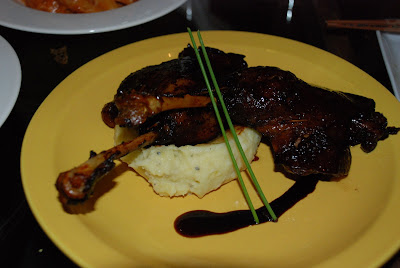 The first of the mains was the caramelized balsamic vinegar duck ($28). I had ignored my friend's suggestions toward the lamb and she was proved correct. The duck was dry and tasted like the Chinese dressing that is usually reserved for the pork in Kung Ba pao. The meat mains like the beef tenderloin, by the way, are about $35 and above in price. 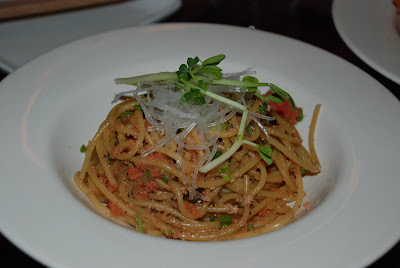 Luckily, the second main was the mentaiko pasta, which I think was the best thing there and the best mentaiko pasta I've had in Singapore. Which, considering who makes mentaiko pasta here, is a pretty big compliment. Cheesey, spicy, rich yet sharp, it was perfection in a bite and the cucumber shavings on the top were genius. This was lapped up. 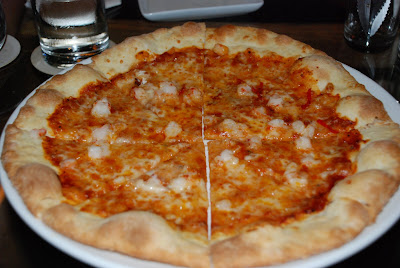 We also had the prawn and chilli pizza, I thought it was a bit light on the toppings but the crust had an excellent crunch to it. My meal companions thought it was not up to scratch. 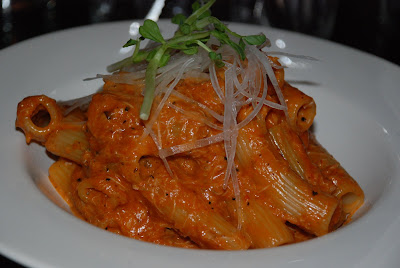 The last main we had was the crab pasta ($22), which was also very well-received. It wasn't my personal favourite but stuck top marks with the others at the table. The sauce was suitably rich but I noted a slightly sour aftertaste, which I couldn't identify but didn't like.

The desserts were a chocolate fondant cake and basil panna cotta. The chocolate cake was well executed but a little, well, predictable. The basil panna cotta tasted vaguely of cough medication but was left unfinished. They only had two desserts, so there wasn't much to speak of. I would Definitely work on the dessert menu- they could be churning out tiramisus, comforting fruit crumbles, even cupcake displays and it would all go with the comforting kitsch of the set-up.

The main draw of the restaurant seems to be their far-flung location, nestled at the edge of the Bukit Timah reserve, in the very niche Spectra building (used to be the old Bukit Timah fire station). The owners have done a charming job incorporating the natural and vintage elements of the surrouding into their restaurant space. It's in a residential hinterland, so hopefully that will work to their advantage, although the prices are a tad high for the crowd (a simple dinner came up to $50 a person without drinks)- there is a reason after all, that Marmalade Pantry does not open in Rail Mall.

I still think the decor and ideas are undeniably hip and worth a trip out but I did bring Colin and my family back for a return trip and it didn't go down so well. The mentaiko pasta was spicy and very dry, the rack of pork which my dad opted for tasted to him to be very much tenderized and the desserts were the same, a bit of a let-down which we didn't stay for in the end.