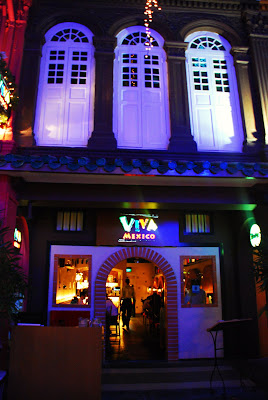 I had the most delightful experience recently. You may have heard me say before that I am not a fan of Mexican food. I put this down to my dislike of bell peppers, paprika, mushy beans and paste-y textures in general. Well, I had a dinner that surprised my taste buds and made me feel that perhaps, I could be converted after all.

I've procrastinated putting up pictures and a review for a few weeks now. I had a couple of work trips to Australia (fantastic produce, not as good eating) and to go diving and I'm still watching the computer screen sway, wave-like, in front of my eyes. I've kept it too long though and so I finally got to uploading the photos.

The photos are bad, the lighting was awful. I was also suspicious for, the restaurant was in Cuppage Terrace, proclaimed "the latest lifestyle and dining enclave" but really more like, well, an enclave. It's a stone's throw from the obscenely expatish Diagon Alley hangout of Emerald Hill, except perhaps it's poorer and somewhat more Japanese cousin. The servers and greeters were in flamenco bright and tight lurex maracas sleeves and they looked just a little ridiculous. Not the best start to a meal. 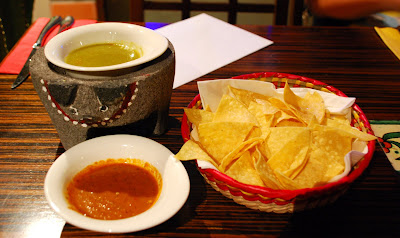 I had been invited by the Sixth Sense PR group and part of the reason I accepted, was to have dinner with one of their lovely partners, who proved as warm and charming in person as she had over our email correspondance. When we arrived, she was sitting with a welcome platter of nachos and sauces. She had picked a selection of dishes for tasting, beginning with an Acapulco cocktail ($14) which was shrimp, fish, octopus and squid, in a tomato-ed mix of lemon, coriander and onion. 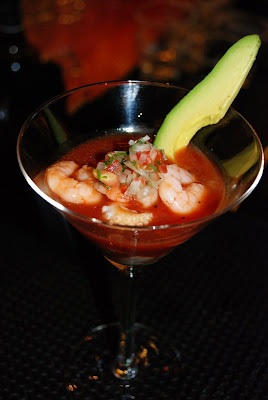 It tasted of fresh seafood, or tobasco and onion and it was at once soothing and sharp. It was brilliantly executed and was a more than pleasant surprise to the beginning of the meal. Funny, I thought, that was really rather good. 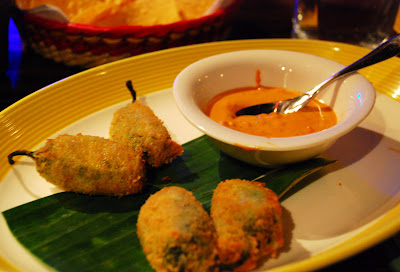 The next two dishes where the Chile relleno de jaiba ($16) or jalapeno chillies filled with seasoned crab meat and the Tamales larranzair ($12), corn dough steamed and filled with chicken, raisins and mole. The first I sampled delicately with the tip of my fork. They looked mildly threatening, a gourmet version of penalty foods served to unfortunate bridesgrooms. They weren't that spicy and the combination of the chilli (skins only, really) and crab, was very palattable. 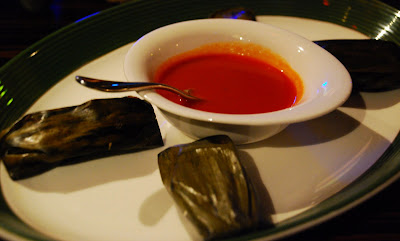 The tameles were good too, if a somewhat corny version of chinese ba-zhang (steamed glutinous rice dumplings with pork). These dishes weren't blow-my-socks off good but they were tasty and quite refined in their preparation. I was finally getting why my American friends insist that Mexican food tastes like Asian cuisine.

The next dish was a Chilli poblano soup ($8), a wedding delicacy made of Chile Poblano and cream. A Chilli soup? Uh-oh. I don't even eat chilli with most of my food (I eat curry, but that's a seperate kind of heat), preferring to taste the nuances of my food rather than burn my palatte beyond recognition. I sipped at a spoonful of the pea-green soup gingerly and waited for the worst.

The soup taste more of cream than chilli, to be honest, but the chilli had imparted a kind of latent heat to the soup, while the cream picked up and created a long, smooth nuanced arc of spice from the back of my mouth to the tip of my throat. It was the most enjoyable experience and woke and tickled my senses in a way that I hadn't felt for ages. I think this was the turning point of the meal and the dish that convinced me that I needed to look at Mexican food with a more open engagement- my, my my... 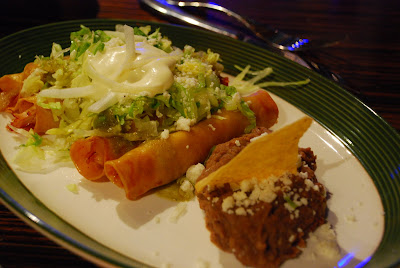 The next two dishes, or traditional mains, were more comfort food, foods that I remembered from the US and probably from their inferior Tex-Mex cousins. The first was Tacos Doradosde Pollo ($18) or fried chicken Tacos, filled with the usual accompaniments of lettuce, tomatoes, cheese and cream. The tacos were still crispy, a good sign. The beans were not sweet (unlike in a certain competitor's house at Dempsey), another good sign. 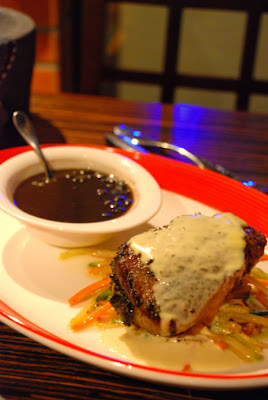 The second main was a beef filet filled with Cuitlacoche ($26), which is a difficult to harvest mushroom that grows between the corn ear and husk. Although it disturbed me to think human hands had pushed these little critters right into my meat, the Brazilian rib-eye was of a really good quality, marbled to rich and tender smoothess.

Out of all the dishes, the dessert was the one that hit it truly out of the ballpark-the Pumpkin en tacha ($9) was a fresh pumpkin slice baked with piloncillo (a sweet Mexican concentrate- a bit like the Asian gula melaka palm sugar), cinnamon, cloves, pepper and guava, then soaked in a bowl of cream. It contrasted cold with hot, fibrous with smooth, savoury with sweet. 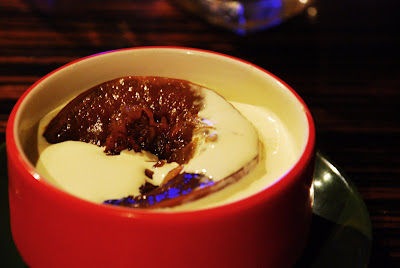 It was enormously good. Enormously. It was reminiscent of the Afghanistani Kaddo Borwani, an appetizer of pan-fried then baked baby pumpkin seasoned with sugar and served on yogurt garlic sauce, topped with ground beef sauce and traditional caramelized pumpkin pie. I could have eaten more than two servings and licked up all the pumpkin infused cream, when my host had politely looked away.

The meal reminded me of the basics- good ingredients, good food and good company. I liked that it was casual, indeed, liked it a lot better than eateries that were trying to be upscale or worse, just being upscale by being pretentious. I didn't particularly care than each piece of decor had been painstakingly sourced for and imported from Mexico but I thought it was very commendable that the Palate Vine group (an F&B group that also runs The Tent Mongolian Fresh Grill and Bar and Vintage India) had managed to source and find three Mexican chefs, headed by Chef Mario Galan, to showcase the Mexican cooking and menu.

I did return to Viva Mexico, about two weeks later. I found the menu much the same as I had the first time, comforting, tasty and unpretentious. A couple of things struck me the second time, firstly, that it was actually fairly well populated, despite the relative quiet of Cuppage Terrace. Secondly, the food is relatively affordable but the drinks prices are quite exhorbitant. A jug of sangria cost (in my rough memory) about $40+, which seemed a bit pricey and given the number of drinks that the group ordered, the alcohol bill almost approximated the food bill.