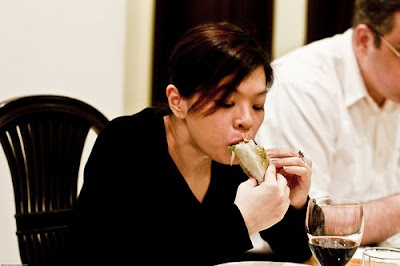 I took the opportunity of celebrating SW being back in Singapore to throw a popiah party! We were very fortunate to be joined by some pre-eminent food bloggers who contributed their time and effort to dinner. Here are some photos from our popiah-making efforts, some as you can see, neater and more polished than others. 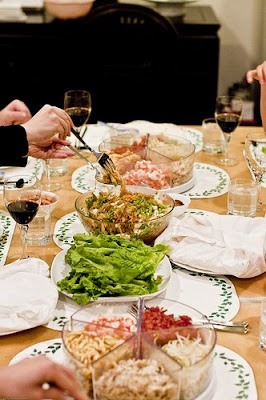 You might think of popiah as a very Asian thing but I actually have a lot of non-Asian friends who would rate it as one of their favourite dishes. You start with a popiah skin, which is essentially a dough wrap. These skins are so thin, they are pratically translucent and making them is an art of its own.

The ones I buy are from the Havelock Street Market and the store there specialises in popiah skins- it's amazing to think he makes enough profit just supplying home cooks and food hawkers around the area. The flour-based dough is very supple and soft and in one swift motion, the old man rubs it on a charcoal-heated plate and removes his hand, leaving a thin layer of dough on the pan. It's a bit like watching crepes being made, except it's not a batter and you actually have your hand dangerously close to the hot plate for a few seconds.

These skins then have to be kept moist and warm awaiting dinner. To wrap a popiah, you take a skin, layer on a lettuce leaf, drizzle sweet sauce onto the leaf and then pile on some of the turnip-carrot-bean filling. 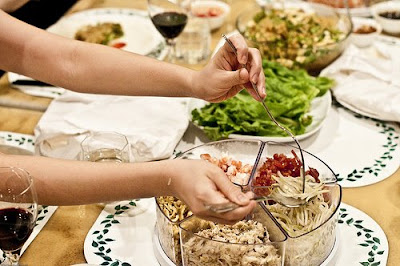 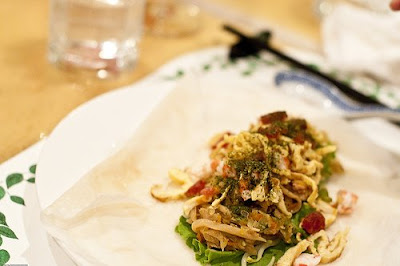 After you've stuffed your popiah, you proceed to roll it up by folding in the edges and rolling the skin into a spring-roll shape. For some of us, it gave a new meaning to "trying to hold it together". 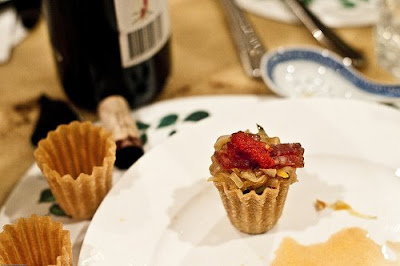 Providing kueh pai tee cups is also a great idea- they were helpfully sold along with the popiah skins and offered a crispy way to eat the filling. 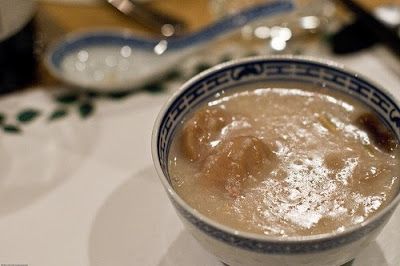 After popiah, we had lean pork and century egg porridge, cooked with black chicken soup. To be honest, I had a pot of black chicken soup on-hand which I had boiled with some sweet corn and Japanese mushrooms because I thought SW might be craving some home-made Asian soup but at the last minute, I felt that the porride was too thick, so I also used it to dilute the congee.

I guess I didn't think of it later, but it would probably enhance the taste. I was surprised to see this so well received, who knew? 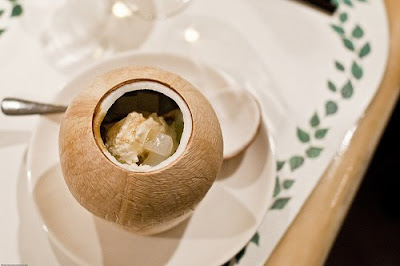 I was particularly proud of my dessert "creation", avocado cream and vanilla bean ice cream with gula meleka and nutta de coco in a young coconut. I had tasted something similar at Jing (at One Fullerton) so when S. asked for this, I thought to try my hand at making it. The recipe, which was a pure trial and error one, is half ripe, soft avocadoes to the number of guests, scraped and squeezed over with some lemon juice and blended with the water from the young coconuts.

The consistency of the avocado cream should resemble real cream, or melted ice cream. I then froze the young coconuts and the avocado cream for the rest of the day and when it came time to serve, scooped out the cream into the bowl of the coconut, scooped in vanilla bean ice cream and laced it with gula meleka and nuttu de coco.

The gula meleka was just chopped and boiled with warm cream, while the nuttu de coco I found conveniently cubed in a ready-pack (in original flavour) at the grocery. 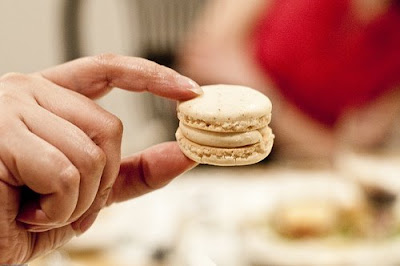 The dessert was definitely the highlight because we gratefully received M's home-made fudgie brownies and K's (of Mad Baker) lemon meringue tarts and salted caramel macarons. Knowing Z. and my weakness for salted caramel, she was kind enough to make us a batch of french macarons, no less. 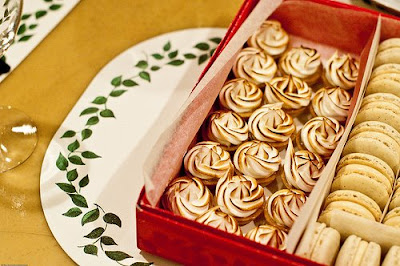 There's nothing better than good company, good food and good friends. I'm privileged to have met these people all through our love of food and fellowship.
Posted by Weylin at 4:26 PM