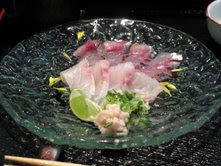 It had been a long time since my last perky Japanese meal. So long, that I had almost forgotten the taste of toro, instead recalling the sour taste of too much MSG, in the all too Casual with a Capital C Japanese restaurants I was frequenting.

Thank God our French Kitchen dinner happened on a day when we were both chock full of western food and we thought to go Japanese. It was definitely my lucky day as we decided then to go to Tomo at Marina Square. I can live without trying overpriced French fare. 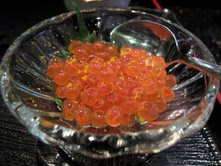 We had round after round of sushi and sashimi, by the time M came, I had eaten my way through the salad and the pickles. The first few rounds were sashimi of aji mackeral and hamaji. Then we had some sushi and chef was tolerant enough to feed me some freshly-made tamago. 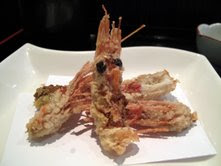 We then had tiger prawns, not wriggling, as they were in Sushi Immamura but still, sweet and fresh and with the crunchy treat of the deep fried heads and tail afterward. 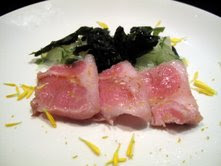 After awhile I forgot what I ate, I forgot to think about what I was eating. All I know is that I barrelled out of there, very happy with my eating and suddenly in love with Japanese sushi again. 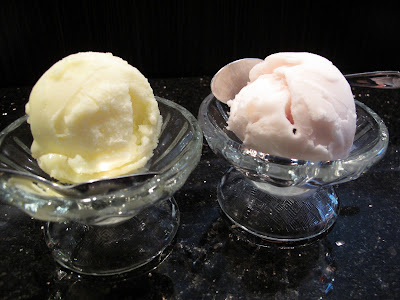 Of course, that might also have to do with the sweet finish of Chef's incredible yuzu and momo peach ice creams- some of the best I have tasted!
Posted by Weylin at 6:00 PM