There's been a dearth of new reviews recently because publicity about new restaurants seems to have dried up, and for some reason I've not been that keen to eat out at restaurants that are not exactly new but that I've not yet visited. 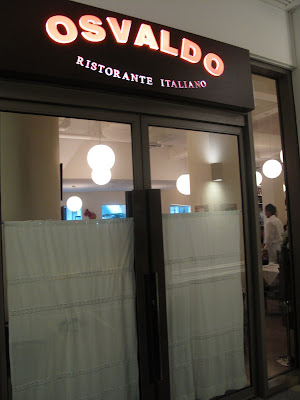 To celebrate a cousin's birthday, however, we made a reservation at Osvaldo, a newish Italian restaurant opened by Osvaldo Forlino, the chef formerly of the eponymous Forlino. Located in Tanjong Pagar at the revitalised Maxwell Chambers, Osvaldo is the new favourite restaurant among the bankers, lawyers and other professionals in that part of town. The restaurant was packed, which was unsurprising for a Friday night, but I've been told a reservation is essential even at lunch. 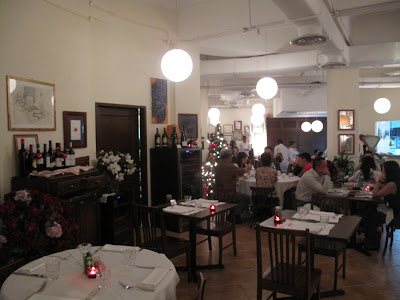 Given Osvaldo Forlino's culinary CV, a comparison with Forlino is inevitable, though somewhat misleading. Unlike Forlino, Osvaldo exudes a much more casual charm - copper pots and pans adorn the walls, and large glass panes allow you to look directly into the kitchen as the chefs prepare the evening's meal. Osvaldo himself is constantly mingling among the diners, adding a personal and personable warmth to your dining experience and contributing to the energy and liveliness of the place, ensuring that dinner is never a staid, formal affair. The restaurant therefore has a much more family-style trattoria feel to it, something which also expresses itself in the food, which is much simpler and more rustic than the offerings at Forlino, but certainly not, simply by virtue of that fact, inferior.

As befits family-style dining, we ordered a series of appetisers to share, and individual main courses. 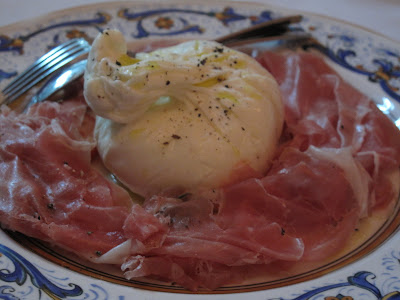 The fresh burrata was almost to die for: an enormous bag of ivory cheese surrounded by beautiful pink ripples of parma ham. Silky smooth on the outside, with curds of mozzarella on the inside, the cheese was creamy and luscious, and demolished quickly. 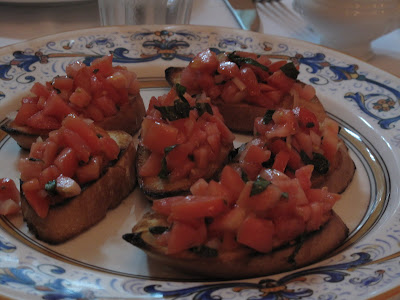 Bruschetta - the classic Italian starter - were also good: crusty toasted crostinis topped high with diced tomatoes that were bursting with sweetness, and flavoured with a generous sprinkling of fresh basil. Simplicity itself, and lovely for it. 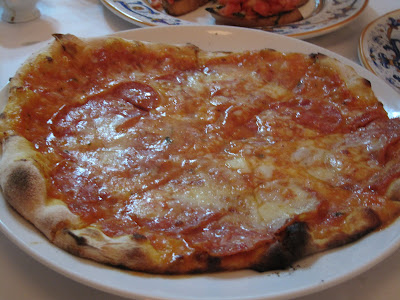 Unfortunately, no one ordered a pizza as a main, but the spicy salami pizza we shared as an appetiser was very tasty and suitably thin-crusted, though a little wet from the oil extruded by the cheese and salami.

The main courses were almost uniformly pastas, as someone had told me that Osvaldo's pastas were particularly yummy. 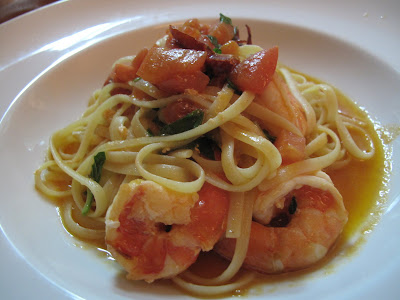 There was a prawn linguine, which looked somewhat plain, though it seems to have been well-received. 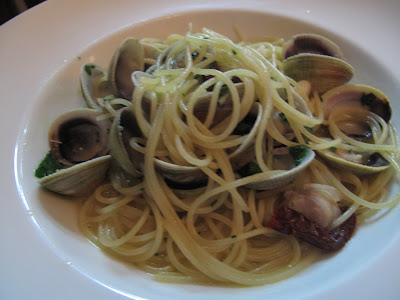 The special of the day was vongole, which were easily transformed into a spaghetti alle vongole. My mother seemed to enjoy this, and she is known to be very demanding when it comes to vongole. 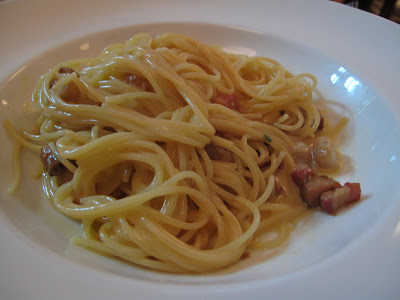 The spaghetti carbonara also passed muster, according to I., who declared that carbonara, though a simple dish, is often mishandled by restaurants. 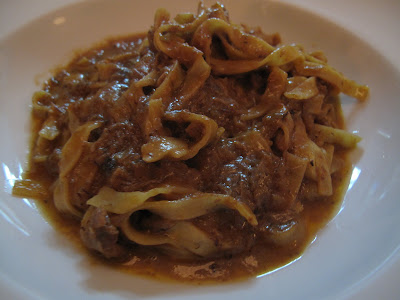 Osvaldo's duck tagliatelle was delicious: the pasta was drenched in a dark, rich sauce that could easily have been something meatier, such as venison. I thought the pasta was slightly overcooked, though given that I was having leftovers, that may have simply have been due to the fact that the noodles had been sitting in hot sauce for fifteen minutes. 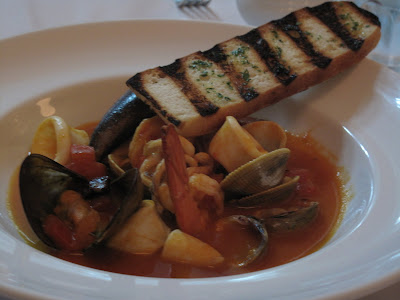 Regular readers of this blog will know that I am not a great fan of seafood, but one of the things I was very tempted to have was the seafood stew, which featured prawns, squid, clams and mussels in a rich tomato-based broth laced with white wine. 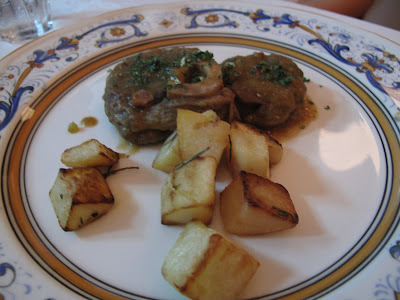 The restaurant's meat dishes seem rather dry, starting with the osso bucco, which was not in the usual Milanese style. Instead, it was served almost nude, with some roasted potatoes. Osvaldo explained that his cooking philosophy takes after his mother's: ingredients should be fresh, and food should be served simply, without pretentious crockery and garnishings to detract from the flavours and smells of what you're eating. While I have great sympathy for this approach to cooking, I do think that sauces, when used discriminatingly, elevate rather than dilute a dish. 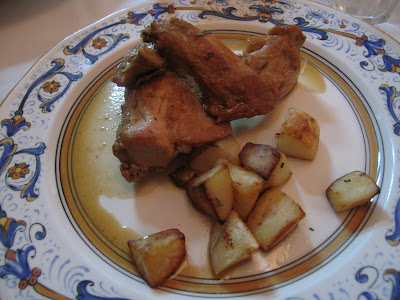 Similarly, my roasted rabbit was slightly dry, which is a shame, since, given that rabbit is such a rare ingredient in Singapore, it seems an unfair representation of an otherwise lovely meat, and might put diners off trying rabbit again even when it is served in different ways. Osvaldo does get brownie points for even having rabbit on their menu though. 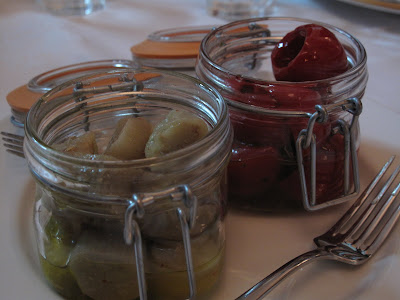 If you ask Osvaldo nicely, he may even bring out some eggplant and chillis that have been preserved in vinegar and white wine, a great touch that reminds you just how much this restaurant revolves around homely cooking and down-to-earth food.

Osvaldo also has an extensive range of desserts, which is particularly appealing way to end an Italian meal. 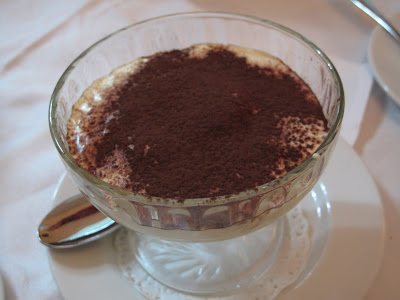 Although there is the ubiquitous tiramisu, there are also a number of other desserts you don't often see. 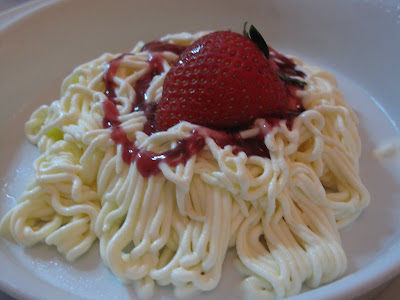 For instance, the ice cream "spaghetti" is a cute riff on spaghetti bolognese: ice cream is piped into squiggles and stained with some strawberry sauce to create an optical illusion that easily fooled my father, who could not quite figure out where the ice cream came from. 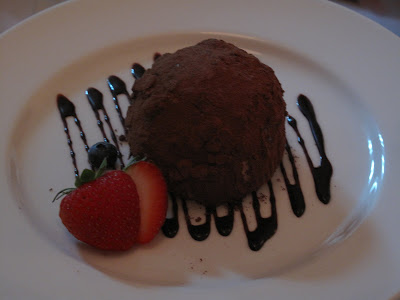 Similarly, the chocolate bombe is an interesting dish: a frozen core surrounded by additional layers of ice cream or chilled mousse, and coated all over in cocoa powder. 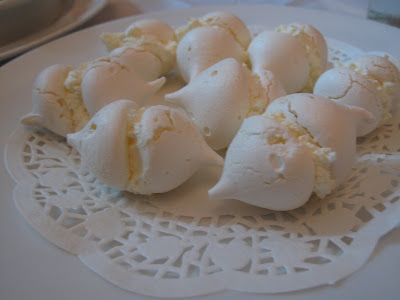 Osvaldo also brought out some adorable Italian meringues for us to try. Looking like little clouds that had been caught and frozen in dry ice, the meringues sandwiched a small blob of cream, working on the same principle as French macarons. Cute and sweet, what's not to like?

Osvaldo is a great new addition to the Italian restaurant scene - warm, welcoming, unpretentious, with good food and service, at prices that are relatively decent. I'm sure that as the Forlino family get used to their new digs, the food emerging from their kitchen will be of an increasingly high standard, and Osvaldo will become, if it isn't already, the new favourite haunt in the financial district.