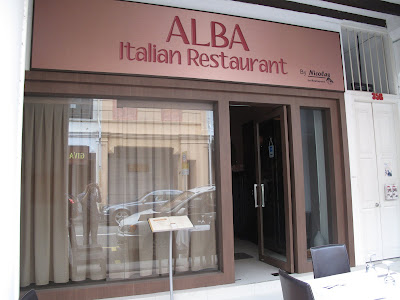 Les Artistes Bistrot, run by the good people of Nicolas Le Restaurant, has closed for the time being, and is to be relocated somewhat further afield, in order not to adversely compete with its larger sibling. In its place, however, is Alba, an Italian restaurant helmed by a Japanese chef. 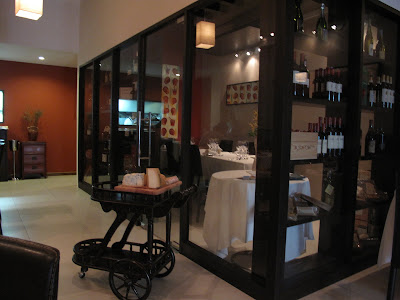 The restaurant is not very large, seating about 30 people. There is a private room available that can seat about 10, but given the small size of the place, I would have thought that economically it makes more sense to put in more tables, rather than waste the space on a private room that will probably not be used regularly. 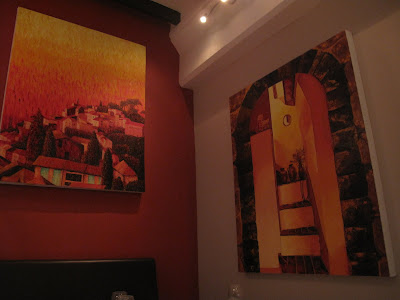 Bold uses of ochre on the walls is mirrored and enhanced by the paintings, which are all pretty earthy, depicting pastoral and bucolic scenery in deep hues of red and orange. Rather Mediterranean, actually, which I suppose was the effect they were going for. 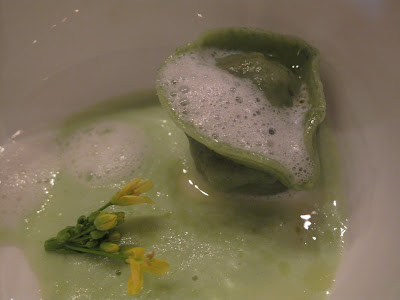 The complimentary amuse-bouche was a ravioli of crabmeat, dyed green with chevril, with an emulsion of green asparagus. Light, fresh and verdant, it was a great way to start the meal and a good display of the chef's deftness in working with the delicate crab pasta. 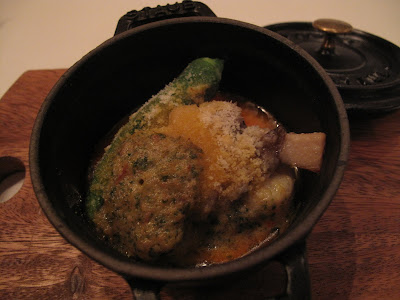 There was no choice as to appetiser, since they ran out of the other option, but the slow-cooked gratineed scallops with a tomato base scented with garlic and lady's finger were an unusual offering. A melange of textures (the crunch of the gratineed bread crumbs, the soft firmness of the scallops and the mouth-coating liquidity of the tomato sauce) was matched by a medley of tastes: sweet, savoury, piquant (not really a taste but who's counting)... As with the crab ravioli, this dish was light and surprising. 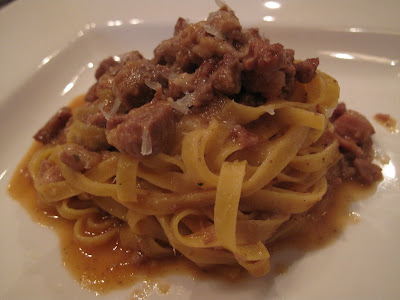 The dish that really surprised me, however, was my tagliatelle served with a ragu of kurobuta pork. I've made bolognese sauce with minced pork instead of minced beef, and it was extremely unconvincing and totally unenjoyable, so I had grave doubts about a pork ragu. However, I needn't have worried: the flavour was intense and incredibly rich, with a dense, heavy reduction that was so strong it could easily have passed for beef stock. 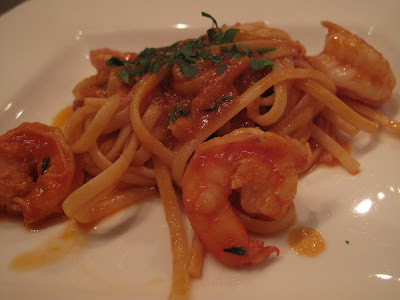 The prawn linguine was somewhat less impressive, I was told, but it's not a very risky dish, so it's slightly unrealistic to expect magnificent rewards. 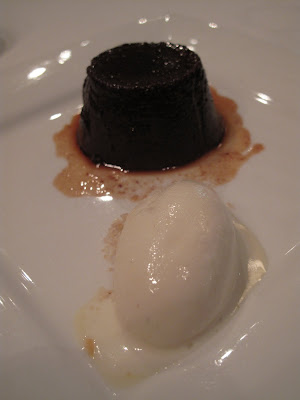 Dessert was also creative - what appeared to be the run of the mill molten chocolate cake turned out to be a chocolate gelee instead. Something of a hybrid between a mousse and jelly, the chocolate was slightly bitter, which went well with the sweet vanilla ice cream.

I'm fond of having Italian food for lunch, as pastas strike just the right balance between being light enough not to put you into a post-lunch stupor, and being substantial enough that you don't leave the table still feeling hungry. Alba demonstrates an innovative and unconventional approach to Italian food that adds an extra layer of enjoyment, and one that ensures that you will have a meal that you can tell your friends and colleagues about.