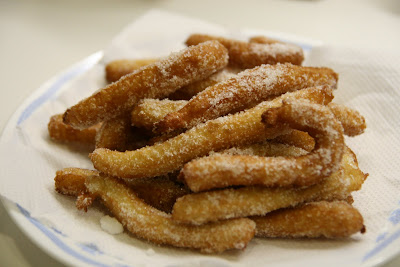 There were two things I had a sudden inspiration for this weekend, churros and spam fries with lime aioli. The latter didn't quite happen but thanks to D's help, the first one did. We were all done with dinner where I'd brought some chocolate cake as a back-up dessert. This was to be the piece de resistance.

I had googled Churros recipes the week before and chosen the one that seemed the most legit. From what I could tell, they were mostly choux pastry recipes which involved the pastry being piped through a star tip into a wok of oil and then deep fried to a semi-hollow puffiness. We tossed the ingredients together and took turns whacking the dough around in the saucepan till it became shiny and pliable.

Just two words of warning, one is not to pipe too close to the hot oil, you may inadvertantly scald yourself with the hot moisture and two, you have to use a closed star tip and not an open (cupcake) star tip like we did, which results in bulgier, less crinkled churros. Other than that, the churros turned out pretty good! I wished we had halved the recipe as we had way too much leftover and I also think we could have done with some hot chocolate accompaniment.

1. This churros recipe said it made 2-3 servings for breakfast but actually it makes way too much for even 10-12 people. I would definitely advise cutting it in half unless you are having a party.

2. Pour vegetable oil, such as canola or corn oil into a large heavy bottomed frying pan. Make sure there is about 2 inches of oil in the pan to cover the churros. There should be enough oil so that they float freely while frying. Set pan aside.

3. In a medium sauce pan, pour 1 cup water. Add oil, salt, sugar and stir. Bring water to a boil. While waiting for water to boil, measure the flour and add baking powder and stir.

4. Once water boils, slowly pour boiling water from saucepan into flour mixture - stirring constantly with a fork until it is a smooth dough without lumps. Note: Dough should not be runny like a batter, but rather a sticky smooth dough. Turn on the flame under the frying pan of oil and while the oil is heating, you want to aerate the dough by stirring it vigourously in the saucepan. This takes the better part of 10 minutes and involves stirring and mixing the dough hard with a wooden spoon, don't be afraid to handle the dough fairly violently. The dough will get drier and shinier.

5. Spoon dough into a churrera (a large cookie press) or pastry bag with a closed star tip. Carefully squeeze dough into hot oil, cut the pieces off the tip and fry until golden brown. Remove with a slotted spatula or long-handled fork. Place on a paper towel to drain.

6. Once drained, cut into manageable lengths. Sprinkle with sugar and cinammon and serve hot.
Posted by Weylin at 4:25 PM

sadly i have yet to try churros, people told me it taste somewhat similar to our fried youtiao?

Here's a toast to all the good food that we had in the past year, and more to come in the brand new year :)

just had churros y chocolate today. the chocolate ended up drowning out the cinnamon, but the combination of hot crispy churro and thick chocolate was fantastic nonetheless.

What was the yield from the recipe?