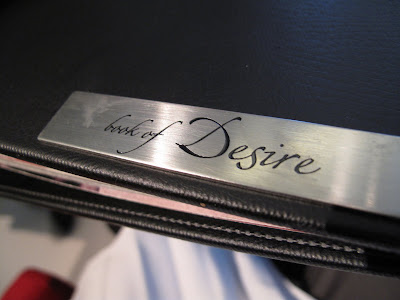 Everybody loves a gimmick. The people behind Desire, the restaurant of the boutique Scarlet Hotel, clearly do, because that's the theme of the restaurant: from menu, to decor, to the names of courses, everything revolves around the idea of temptation, sin, lust, and other carnal pleasures, as you can see below. 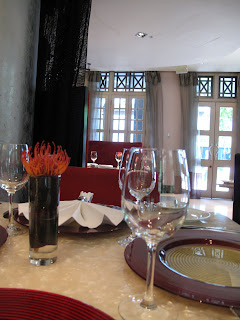 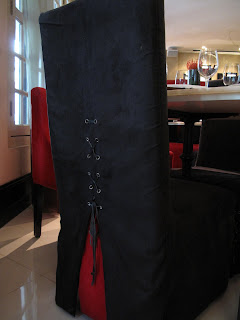 The S&M bordello theme is not exactly very subtle, but whatever works, right? 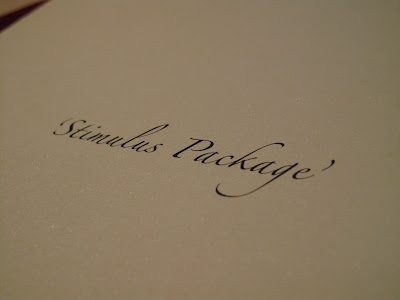 The "Stimulus Package" is Desire's extremely seductive and alluring set lunch menu: at $24 for two courses and $30 for three courses, it is priced at a very substantial discount to the restaurant's a la carte menu (the "Book of Desire"), where main courses can cost in excess of $40. 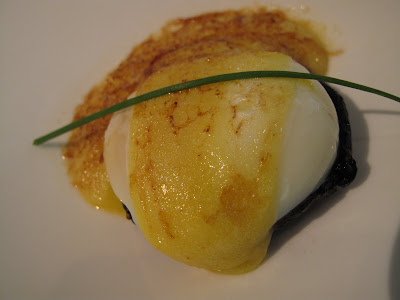 For starters, I had the baked portobello mushroom, which was topped with an egg cooked sous vide and finished with some melted cheese. Having cooked something similar myself, this is a good combination of ingredients: the neutral-tasting, meaty mushroom is enriched by the poached egg and complemented by the salty, tangy cheese, though I felt that given the richness of the egg yolk and cheese, the dish would have benefitted from a drizzle of balsamic vinegar to lift it with some viscous sweetness and cut through all that fat with some acidity. 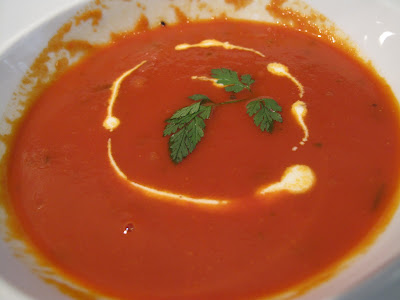 The tomato soup was a bright, cheerful orange, carrying an intense flavour of ripened, sweet tomatoes, despite the fact that the pulverised seeds had not been completely strained out. A bit on the thick side, the soup is best enjoyed together with the warm, crusty somewhat hollow bread the restaurant serves. 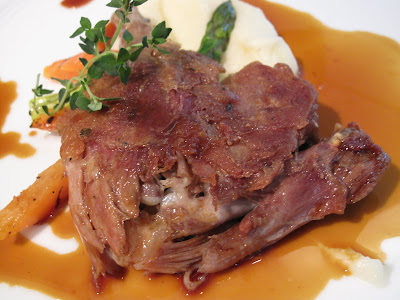 My duck leg confit cooked sous vide evidently did not survive the cooking process unscathed, as it looked rather battered on the plate, with the skin broken in several places. Nonetheless, it was quite tasty (although the skin could have been further crisped), and served with a zesty sauce that contained some orange juice, which helped to cut through some of the oiliness. The duck leg wasn't too large, which was just right for a lunch portion, and had been slow-cooked to tenderness. 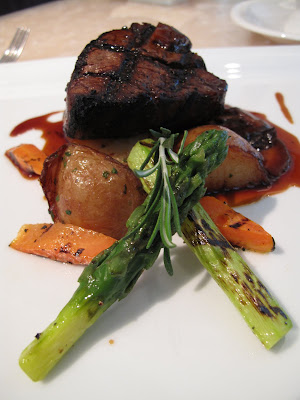 The char-grilled beef fillet was another winner: the scorch marks lending a smokey flavour to the meat, which was nicely rounded off by the rich red wine sauce. The potatoes had been initially roasted, then gently cooked in red wine, which removed some of the crunchy exterior on the potatoes, but left them with a hint of tannins. 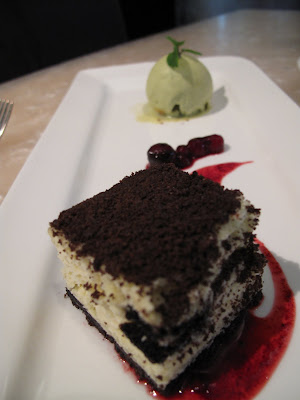 Dessert for me was a white chocolate cheesecake which was served with a scoop of what might have been green tea ice cream. I'm not overly fond of cheesecakes, so this petite portion was enough for me. I imagine this would have satisfied serious cheesecake afficionados. 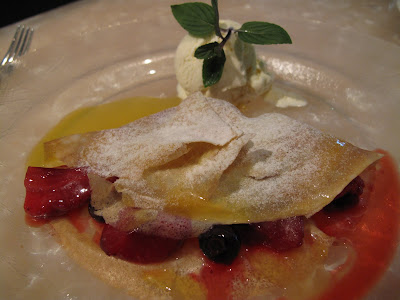 The other dessert option was a fresh berry crepe served with lemon sorbet (which my father requested be substituted with vanilla ice cream). Confit (incidentally, how does one use a French word that is already in the past tense in an English sentence to express a past tense? Confit-ed?) strawberries and blueberries were wrapped in a soft crepe and doused in a syrupy orange sauce. A little too sweet, but otherwise enjoyable for those who like berries.

If you work in town, set lunch at Desire may be a good idea - service is friendly and efficient, portions aren't huge, the price is right, and the ambience, even if a little over the top, will ensure that you have something to talk about over lunch. No surprise that the restaurant has enjoyed a favourable word of mouth reputation as well as formal recognition as one of Wine and Dine's top restaurants of 2008.