When I was young, I hated going to Sentosa for school outings. I thought it was a glorified landfill that had been created solely for the tacky purposes of national education and tourist promotion. In my teen years, Sentosa became identified with beach parties and an almost rebellious counter-culture.

These days, however, Sentosa has become a destination of choice, boasting scenic hotels set among tranquil forestry, golf courses, luxury villas and a gamut of activities. Once the integrated resort is completed it will become even more interesting, and an awesome vertical wind tunnel is currently under construction. Increasingly, Sentosa is also becoming a venue for good food: Il Lido set up shop, and all the hotels have their own attached restaurants. It seems that, contrary to what I said in my review of Il Lido, there may be many reasons to go all the way to Sentosa for a meal. 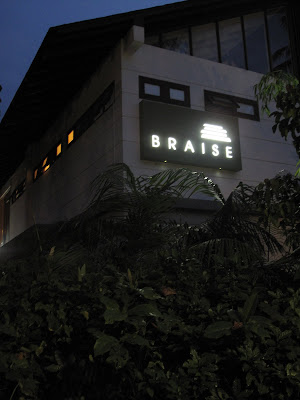 One such reason is Braise, a restaurant that has been on my radar ever since it opened to decent reviews a few years ago, but that I'd forgotten about for a while. That is, until I tried to make a booking for dinner a month ago, only to find that it had been fully booked. My curiosity piqued, I was determined to see what made it so popular. 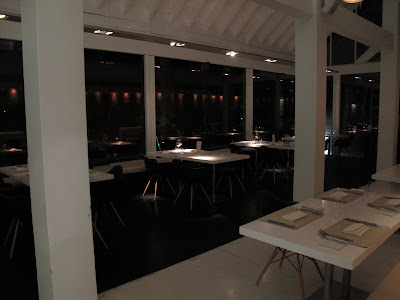 Somewhat unexpectedly for a beachfront restaurant, Braise had a dress code that frowned on open-toed slippers, even for ladies, and so my date and I were relegated to the other end of the restaurant, which turned out to be a blessing in disguise, as the tables there had table lamps which were much more conducive to photography. 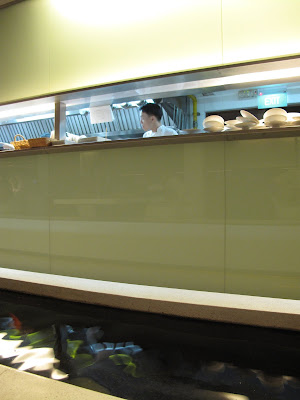 The tables we were seated at were also located next to a long koi pond, and were also across from the kitchen, allowing us to watch the culinary team helmed by Chef Desmond Lee in action - a poor man's chef's table, if you will.

Service at Braise is very good: the waitstaff, watched over by the friendly and excellent Operations Manager Ms Azrah Ang, are warm and observant - I never had to ask for a refill of water, and I was informed that mains were on their way without having to inquire if there had been a delay with the food.

As for the food, Braise specialises in contemporary modern European cuisine, much like its sister restaurant, Ember. 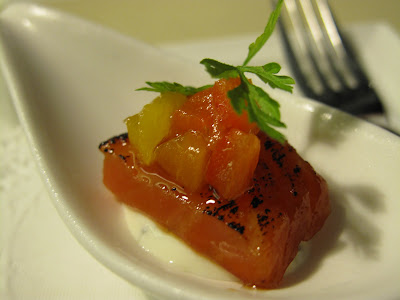 We started with an amuse-bouche of cured salmon, sitting on a dill mayonnaise and topped with diced peppers. The dish worked well: served chilled to accentuate the taste of the fish, already enhanced by the curing process, with a sweetness coming from the peppers and mayonnaise, the latter of which also served as a sort of sauce to contrast the soft texture of the salmon. 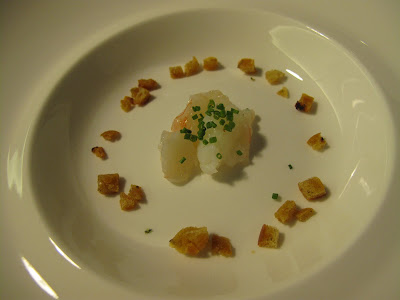 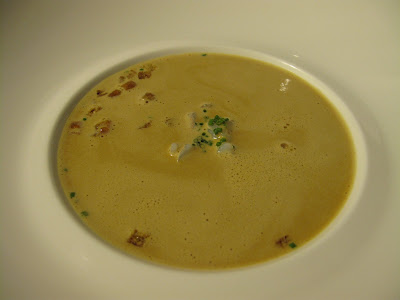 My lobster bisque with lobster ceviche and croutons ($20) was very comforting: throat-warming with a robust, umami flavour achieved by extracting every last drop of essence from the shells of lobsters. Again, the texture contrast with the crunchy croutons is a good idea. 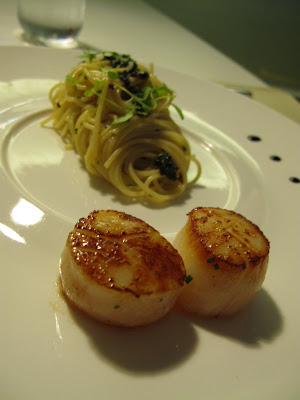 I thought my date could have done with an additional scallop in her capellini with seared Hokkaido scallops ($24), although the pasta was faultless. Braise seems to favour using capellini as a side in many of their dishes, which means that for those with small appetites, a starter can pass for a main course. 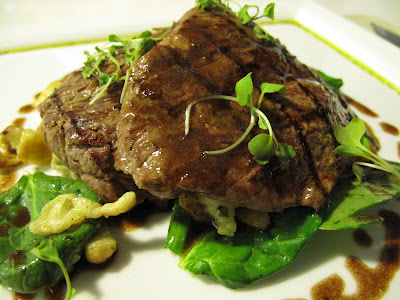 My main course of venison loin with sauteed spaetzle and wilted spinach ($36) was quite marvellous. More strongly flavoured than beef, I was particularly impressed that the chef had managed to cook the meat to a perfect medium doneness despite its relative thinness. You'd think that doneness is the most basic thing to get right, but an astonishing number of restaurants have great difficulty getting it right, especially when the meat is thin. I've not eaten fried spaetzle before, and they seem essentially to be fried bits of flour, but they went well with the meat, as did the wilted spinach, which lost most of its subtle bitterness to become a healthy accompaniment to the venison. 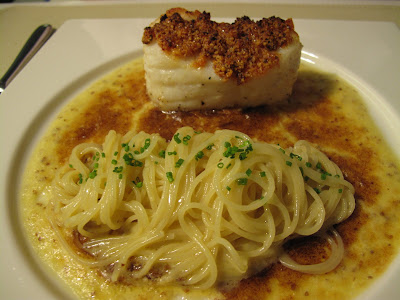 My date, having declined to replace the capellini in her main course, found the cod with spiced crust, capellini and sabayon of grain mustard ($36) too rich to finish, which was unsurprising, given that cod is naturally oily. Apart from that, however, I thought it was an interesting dish: you don't often see fish paired with pasta. The mustard sauce, although heavy, was not at all harsh or overpowering, having been cooked down to a mellow, almost sweet, nutty sauce that flavoured and coated the pasta. The fish was fresh and well-cooked, easily falling apart when teased with a fork. 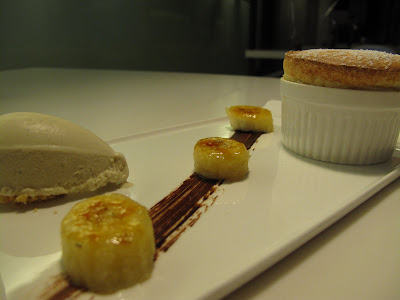 I went to Braise Restaurant on 14/02/2011... The environment is nice... But too bad... Something bad happen... In the middle of my course... one of the dish come with a piece of crack glass and they served it to me... The dish is like a ice blended fruit juice...It have come to conclude that maybe they have blend the glass together with the ice...when I was about to finish the last spoon, then I realised the piece of glass is in my mouth... Lucky i didn't bite on it, if not I wont be able to write this comment at this time. The staff in the restaurant come but the head of the cook never come out and show concern of what he have done. The restaurant only given us 10%discount of the total bill of nearly $200. At that moment, we dont intent to make any fush on this matter...due to the festival...I hope if ppl come to encounter thit type of matter, hope they will be able to go visit the doctor and demand from them for the reasonable payment. There is a bit unwell in my tummy but I'm still observing it.

Yeesh, am sorry to hear that. That has happened to me before too, it's a key risk for a restaurant and they should have refunded your meal given the bad taste left in the mouth (literally!)