It's common knowledge that the restaurant industry is a merciless business, especially in Singapore, where consumers are fickle (remember the bubble tea and pork floss bun fads) and demanding when it comes to food. Italian food, in particular, seems to witness a phenomenal turnover, with at least two or three new restaurants opening every week. 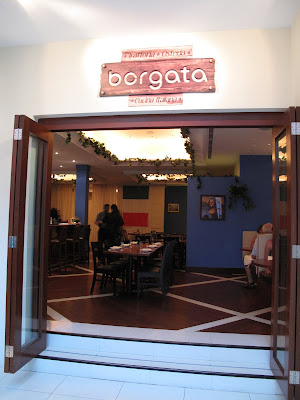 Borgo, the popular restaurant along Sixth Avenue, has closed, but its chef and maitre d' have moved to a new restaurant, Borgata Trattoria Osteria, in Clarke Quay. 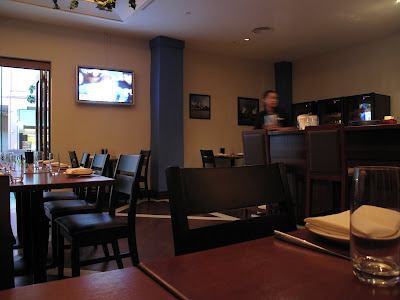 The restaurant certainly lives up to the "osteria" label: a flat-screen TV is provided for patrons to follow their favourite soccer teams, which creates a convivial, casual, taverna feel. Unsurprisingly, there was a match featuring Juventus FC.

Food is relatively cheap and abundant - like any authentic osteria/trattoria, Borgata is a place to share, spreading the warmth of kinship and love of eating generously around the table. 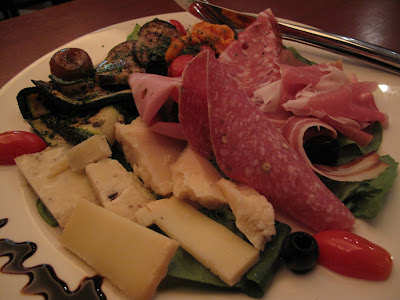 The antipasti mixto is not groundbreaking, but the collection of grilled vegetables (eggplant, zucchini and pumpkin), fresh tomatoes, cheese (parmigiano-reggiano and pecorino), and cold meats (prosciutto, mortadella, salami) is irresistible, especially when eaten with a drizzle of balsamic vinegar. 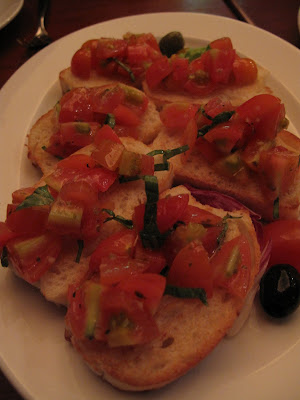 Who doesn't like bruschetta? Zesty and refreshing, it's like being reunited with an old friend over drinks. More tomato concasse would have been better, though. 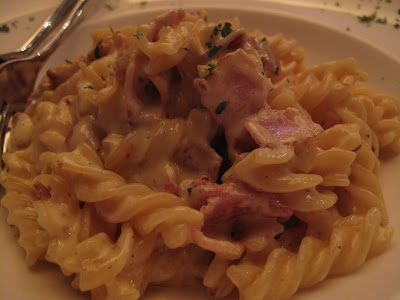 The pasta carbonara, interestingly, took the form of fusili, rather than the more common spaghetti. Not too creamy, so that you won't feel completely bloated after having a portion. If you're feeling more adventurous, Borgata has a dazzling array of more exotic pastas such as orechiette, combined with interesting sauces. 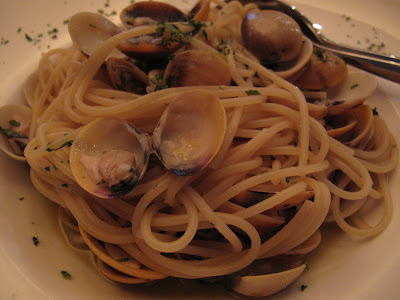 Alternatively, stick to something safer like the spaghetti alle vongole, which had a lovely flavour from the white wine and clam juice, but did not have very meaty clams. After the trouble of prying open clam shells, teasing out a few scraggly strands of clam meat is something of an anti-climax. 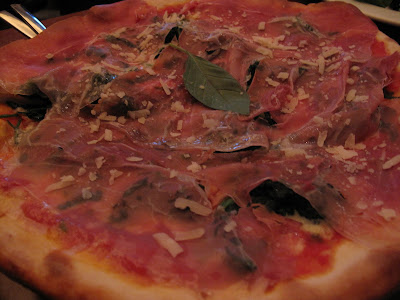 My father is a great fan of pizzas, and when he heard that I was going to Borgata, he gave me instructions to try the pizzas and see how they compared to Borgo's. I decided to order one with everything: mushrooms, mozzarella, parmigiano-reggiano, arugula, and prosciutto. The pizza was sizeable, with a nice thin crust and a generous helping of ingredients. Although the kitchen had run out of arugula (what kind of Italian restaurant runs out of arugula leaves?), it was replaced with spinach leaves. The spinach had wilted due to the heat of the pizza, which created a slightly limp texture that would not have been present had arugula leaves been used, but I suppose beggars can't be choosers.

Borgata needs to brush up their dessert offerings, though. Currently, they only offer tiramisu, molten chocolate cake and panna cotta, which is a combination that is scarcely original and hardly inspiring. Consequently, we chose not to have dessert, but went to a patisserie a few doors down.

Borgata may still be finding its feet, but with a little time, it should soon be drawing hungry diners through its doors with the promise of good food at affordable prices, in a friendly, unprepossessing environment, and perhaps a rerun of a Juventus game.

Which chef from Borgo is now at Borgata? I read from the papers that chef Mimmo from Borgo has now opened Al Borgo, situated at 383 Bukit Timah Road, #01-02 Alocassia Apartments.

What's the pricing like for the pasta and mains?

JY: I'm not sure - I recall reading in the Business Times that the Borgo chef was at Borgata.

myfoodsirens: Not too expensive, high teens to low twenties?

You're right. It's not chef Mimmo, but another chef who was also from Borgo --> http://www.soshiok.com/critic/article/6216

Anyway chef Mimmo from Borgo has opened Al Borgo along Bukit Timah Road at Alocassia Apartments. Don't know if its standard is similar to that of the old Borgo.