It's a very strange thing, that generally people tend not to be familiar with the eateries that are located closest to them. I've been to Brazil (the churrascaria) as well as Corduroy and Finch only once, and there are plenty of restaurants along the Bukit Timah stretch I've not tried. 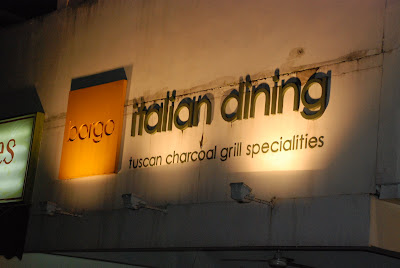 One such is Borgo, an Italian restaurant that's been around for a year or so now, and was fairly well-received when it first opened, only to be overshadowed by flashier places like Il Lido and Bonta. Visiting a year after it's opened offers a chance to see what the restaurant has matured into and affords opportunities to guess if it'll stick around. 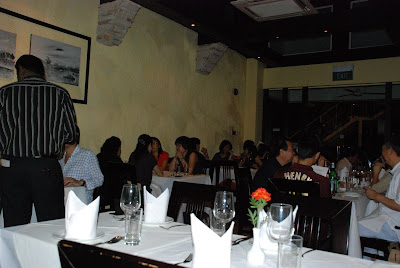 Borgo is fairly tiny, accommodating at best thirty or so people, and the restaurant was fully packed on a Saturday night. Such a small restaurant requires very service staff, resulting in the slightly strange situation of there being an equal number of people in the kitchen as there were outside it.

Reputedly, one of the chefs, Mimmo, is an alumnus of Il Forno, which would explain a generous offering of pizzas and roasted meats, which is grilled by the chef behind a plexi-glass screen so the whole restaurant can see what he's doing.

One of my constant bugbears in local restaurants is the quality of service. Coming back from the UK, the difference is very stark - few waiters in the UK would interrupt you in the midst of conversation, let alone touch you on the arm to do so. Other noticeable lapses was a mistake in recording an order, and not knowing who ordered what. 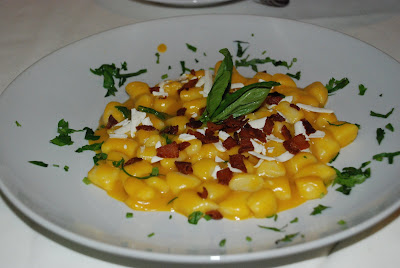 In terms of food though, I was suitably impressed by what Borgo had to offer, in terms of both quality and quantity. Take the pumpkin gnocchi, for instance. It came on a huge plate, quite sufficient to share between three people. Although gnocchi in general tends to be rather heavy, and the addition of the creamy pumpkin sauce even more so, it's manageable if shared between a number of people, and the pumpkin sauce made the dish deliciously sweet. A sprinkling of cured ham provided a salty counter-balance, to offset some of the sweetness and creaminess. 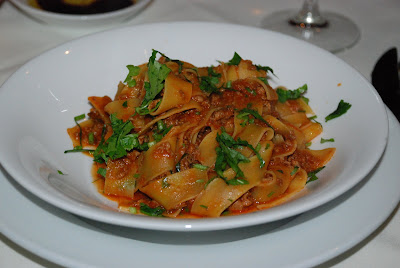 Like Carluccio's in the UK, Borgo offers a wild boar pasta, a dish I particularly enjoy, as it escapes the tedium of a spaghetti bolognese, yet being familiar enough that you're not unpleasantly surprised when the dish arrives. The sauce, in particularly, was satisfyingly rich and meaty, with a richness more evocative of tomatoes and mellow earth than the strong red wine and powerful red meat you tend to get with bolognese. 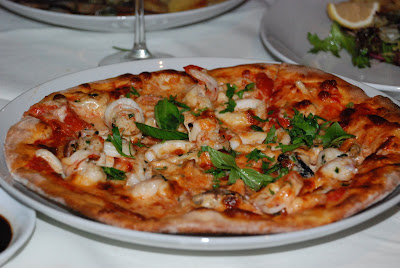 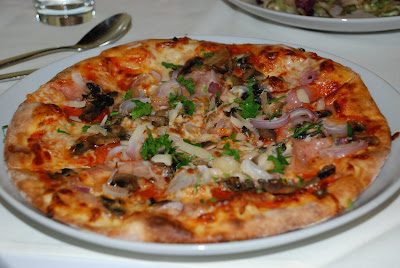 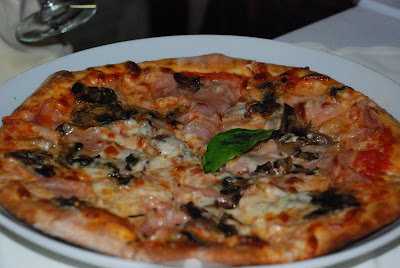 The pizzas, which I unfortunately did not try, seemed serviceable enough, though there were reports that the seafood pizza (which to me is an aberration in itself anyway) was not very well-received, and I think the general consensus is that Borgo is not particularly strong in seafood. 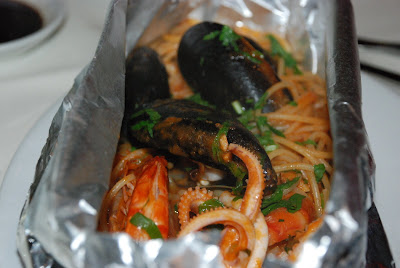 This was the case with the seafood pasta, that came served in a parcel of aluminium foil; it was unfortunately left unfinished by the end of the meal. 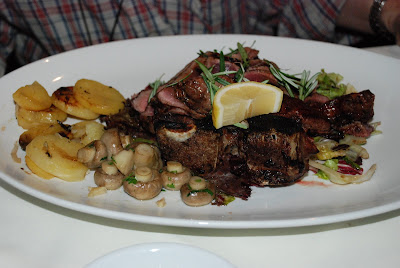 What it is strong in, though, is meats. The bistecca Fiorentina is served in a mouth-wateringly large mound, sliced into pieces to reveal a rare, burgundy interior. This 700g monster (to be shared) is a must for any serious carnivore. Other meaty offerings include the grilled lamb chops and US prime steaks; this is not exactly a place a vegetarian would feel comfortable in. 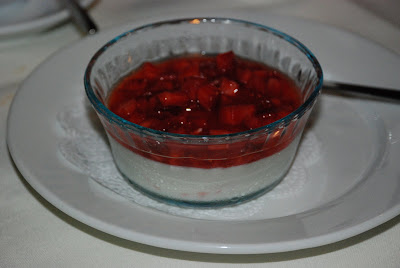 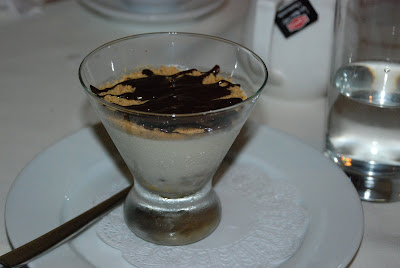 Additionally, Borgo has the distinction of serving one of the better panna cottas I've tried in local Italian restaurants (and I've tried quite a few). Borgo actually does two versions; their regular one served with a strawberry coulis, and a Christmas special served with what looked to be cookie crumbs and a chocolate sauce. I didn't try the Christmas special, but from all accounts it was firmer and a slightly odder combination than their usual panna cotta.

A great restaurant that does Italian favourites properly; Borgo is the sort of cosy place you'd come to on a date or to have dinner with a friend you haven't seen in a while. Stick with the house specials and you won't be disappointed.